Do you want to learn how to draw Rattata, one of the most popular of all Pokemon characters amongst boys and girls? I have put together a step-by-step tutorial that will help you figure out how to draw Rattata by using simple shapes to build up Rattata’s form. This is an intermediate cartooning tutorial that older kids, teens, and adults will enjoy. Even some younger children might be able to draw Rattata if you stand by to help with the instructions. Enjoy! 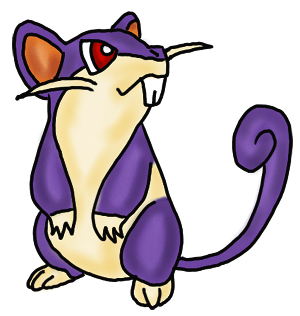 Step by Step Drawing Lesson : How to Draw Rattata from Pokemon for Kids

To start off Rattata’s face, draw a slanted oval as shown above. Don’t worry about mistakes because you can erase these later. Later, you will be using a pen or marker to outline the ‘right’ lines.

Notice that we are now drawing Rattata’s facial features, including an ear,  nostril, and mouth. Try to look at these shapes as basic forms. For example, the mouth can be seen as part of a capitol ‘M’. When you see the shapes ‘looking like a simpler shape’ such as a letter, it becomes easier to draw things that at first appear difficult to draw. 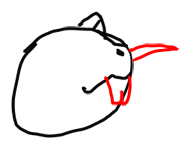 Now we will attempt to draw one of Rattata’s whiskers and his teeth. The whisker should be simple enough for you to draw, just draw it as a sideways (long-shaped) ‘V’ and try to see his teeth as a boxey ‘W’. Does this make it simpler for you to draw so far? I hope so. 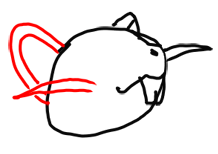 Now lets draw the other whisker. Again, you can see the whisker as a sideways (long-shaped) ‘V’. Now draw the other ear. Do you see that the ear looks like an upside down bubble-letter ‘U’. Try to draw it and you will see that it is just like drawing a ‘U’.

It is now time to draw Rattata’s eye. At first look, this eye might appear to be complicated to draw. However, if you take a closer look at this eye, you can break down the shape into several easily-drawn shapes. The eye’s outer shape is simply a slightly curvy triangle and I know that you can draw that. Inside this ‘curvy triangle’ shape, just draw a slightly curvy line and a half circle and you have your eye. 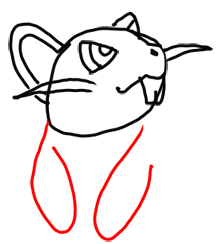 Now for drawing Rattata’s arms. Do you notice the ‘U’ and the ‘C’ in these 2 shapes? If so, then you will be able to draw his arms quite easily.