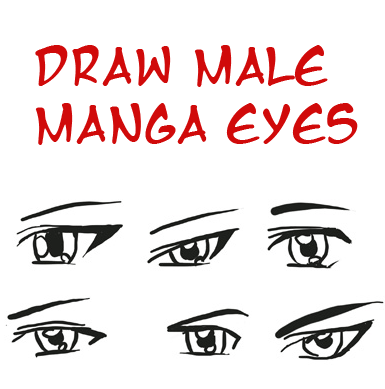 Begin drawing the male Anime eye by drawing a thick line for the upper eye.  Don’t make the line too straight, give it a little bit of a curve in the middle.

Remember that Manga male eyes are always “narrow” and “thin” compared to female eyes. Place the lower eye line not to far below the top eye line.  (See Drawing Female Anime Eyes Tutorial and compare the differences in eye construction)

Now add the iris by drawing a circle covered partially by the eyelid. Also emphasize the eyelid by drawing a thin line just above the upper eye line that was drawn in step #1.

Just as any Anime/Manga eye, the glare in the eye is always present and the male eye is no exception. For proper understanding on how to place glares, below we have place the glare instructions from the female eyes drawing tutorial.

Samples above best demonstrate how glares should be applied to the eyes. Red arrows indicate light source in different directions and glares originated where the light source is from.

Add the pupil in the center of the iris. Always place the pupil behind the glare.

Finalize the eye by shading the iris. Note: Don’t forget that male eyes still have eye lashes … so still include them as we did. Other male eye variety following the same method.

Above you can see many styles of male Anime / Manga eyes so you can see that the style we illustrated isn’t the only way. Good luck.