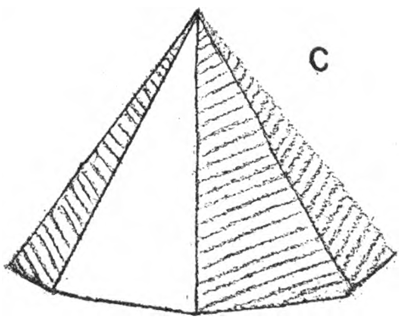 It is always wise for a beginner to draw the shading lines in pencil before putting them in with the pen. In C a pencil sketch is shown with the lines marked that are to be later drawn in with pen. 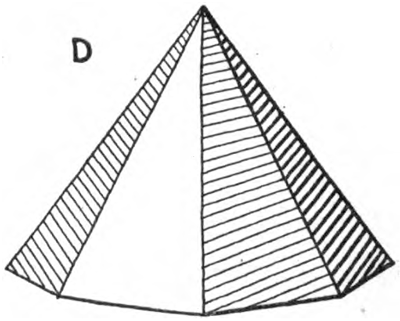 D is the finished pen drawing. Of course, this method is largely dropped when the artist becomes an expert; but it is, at the beginning, very necessary.
Showing shape by line direction 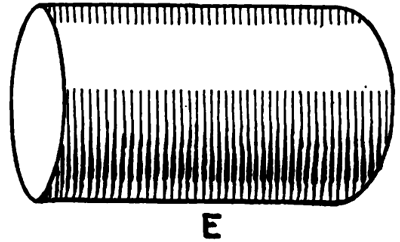 In E no notice has been taken of the shape, otherwise than as it casts a certain shadow. The shade lines have been simply run straight vertically, the sole means for showing the shape being the different degrees of tone and thickness in the lines, and the perspective of the ends. If these ends are covered, we get no effect of perspective in the object, ,which looks as though we were gazing squarely at the side, instead of partially from one end. It simply becomes a part of a rounded object set in front of us. 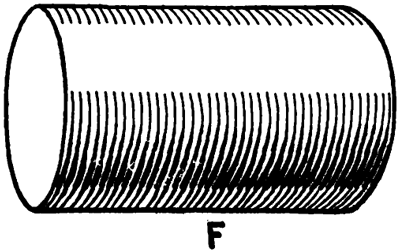 In F the tone quality is the same, the shadows fall in the same places, but the lines composing them conform to the perspective shape of the cylinder instead of ignoring it, as in E. Thus it makes no difference where the eye falls upon the surface, we appreciate the fact that the cylinder is in perspective and viewed from one end. If we cover up the ends, it makes no difference, and if we imagine this cylinder to be part of a group, with both ends covered, we can readily get the reason for the point made above, and see why the direction of shade lines is sometimes a matter of great importance. 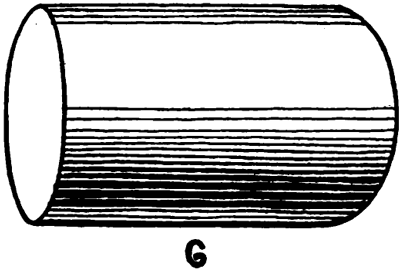 G shows a third method of lining which is useful in some cases and can be drawn in less time, but by far the best manner of shading for general work is that shown in F. 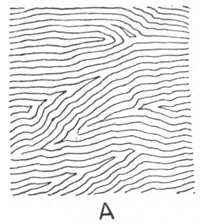 A shows the effect obtained by line direction very well. The whole effect of this drawing is obtained from the direction of the lines. They are all of practically the same thickness and the same distance apart, form a flat and even tone, and have no shadow variation at all. Yet the texture shows very plainly; we are in no doubt of the object we are gazing at, we know that it is a piece of wood, and the effect of the grain is obtained solely through the direction of the lines.

Direction of lines is also a question of deep moment in groups, as at C. Note the way in which the lines help the effect, by separating the various articles from each other. The background lines are run horizontally, those of the table horizontally, while those on the bottle and the pen conform to the shapes of the objects. The various objects are thus separated or individualized not only by the differences of tone, but also by the differences in line direction. Technique of redrawn lines. It is not always possible, especially for a beginner, to draw a line of just exactly the proper thickness to make a certain tone required.