Did you ever try to draw a baseball pitcher in action?  How did you proceed? Did you thumb through some old sports magazine looking for a good pose to copy? Or did you sit back and try to remember how your local sport’s cartoonist once drew a famous baseball player … or did you perhaps just sit and scribble, hoping that the vague image in your mind would became a concrete reality on your drawing paper? Didn’t you decide to give up when you saw the result? 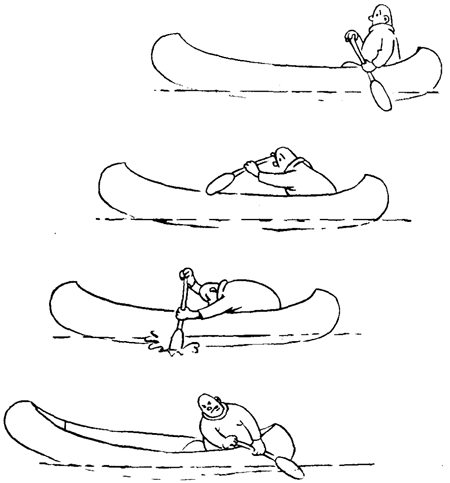 This complex action has been rendered in a semi-finished figure to personalize results.

You can analyze this particular action by sitting on an ordinary chair, using a broom-stick as your paddle. The action is performed by the arms and torso. The legs and hips act as a brace, against which the torso pivots. Note the full stretch forward before the paddle is plunged into the water. The last position shows how the paddle is used as a rudder to keep the canoe on its course. The paddle is not turned to this position until the canoe is gliding. Notice tilt of canoe due to forward momentum and weight distribution.

Let us show you how an animated cartoonist would treat the same problem (we must turn to the animator for the solution of action problems as that is his job).  First, the animator would divide the action into the three simple parts we have previously named. One, the anticipation (what the pitcher does before he throws the ball); two, the action (the actual throwing motion); and three, the reaction, (what the pitcher does after the delivery of  the pitch). He next draws upon his experience, and acts the entire action through, making rough little sketches of the important positions. These sketches represent the main features of the action.

At this point you may protest that you only want one position of the pitcher and not something that happened before or after. Let us answer by asking whether you had the exact position that you wanted to portray in mind before you started? If you did, was that the best phase of the action to illustrate what you wished? If you can answer a positive YES to these questions, you can stop right here … you’re a master cartoonist.

The true value in the animators’ methods in analyzing action lies in being able to know that once the body is set in motion, it flows in a predictable pattern. If you understand what each part of the body is doing at every phase of an action, your selection of the particular phase of the action that you are going to illustrate is bound to be much more intelligent and convincing than if you don’t understand the overall action.

Now let’s get down to finding out just what the body does in action. YOU will have to be the guinea pig and the scientist, both, analyzing your own movements and putting the essentials on paper.