You will notice that the hip mass pulls away from the upper two masses and that the upper masses flow through in an effort to overtake the errant hip. The hip mass always reverses its direction before the upper masses can stop and change direction also. This is the body’s rhythmic flow when in action. (Blade of Grass principle). Problem : Analyze your own walk starting from a standing position. First put down the relative position of the feet, and place hip mass in balance. 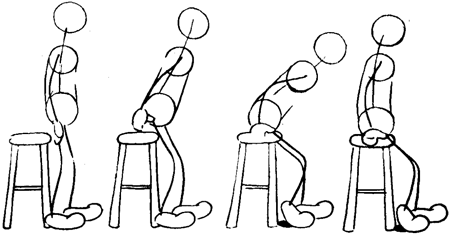 The simple things you do every day should be the subjects of your analysis. How you reach for the cookie jar on the high shelf, how you sit down, how you pick the cat up and how you put him down. Act these things out at normal speed, then in slow motion. Do not put down a sketch until you are sure that you understand where your masses are. From repeating this observance your mind will begin to “think in actions” and your sketches will take on new movement and life.

The successful analysis of this action, like that of the golf swing below will be greatly enhanced if you are a devotee of the game. Otherwise you will have to rely on a retentive memory, and a good sense of analysis. It gets monotonous to keep pointing out how the hip leads, to be followed by the shoulders and head, which in turn starts the arm in the path it is going to follow. However, since most action follows this pattern, you should be pleased that your worries will be confined to finding out the degree of difference between one action and another. Note how the head of the racket continues in its path even after making contact with the ball. The body finally checks the action of the racket.

A good part of this action has to be done by deduction. However, it can be done by understanding the  initial part of the action. By that we mean, you must know exactly what your body is doing up to the point where your feet leave the ground. The lower part of your body obviously pulls away from the upper half. The incredibly off balance positions of the body in the air and when the feet hit the ground is possible only because the body is in rapid motion. The degree that your body is off balance will determine the violence of the reaction after the feet land. In some cases the body can regain its balance and not fall. In others a fall is the only thing possible. You will have to be the judge.

ANIMATING FIGURE PICKING UP A MAGAZINE

Here is a relatively simple action, but you’d be surprised to know that it is a difficult one to analyze correctly. Note how subtly the body leads and reverses itself while the arm descends, swanlike. Note the reversal of the body again as the hand starts up with the magazine in it. Try picking a magazine from the floor as well as from a rack or table. If you can successfully analyze these actions, you really have made headway in your acquisition of a cartoon vocabulary. 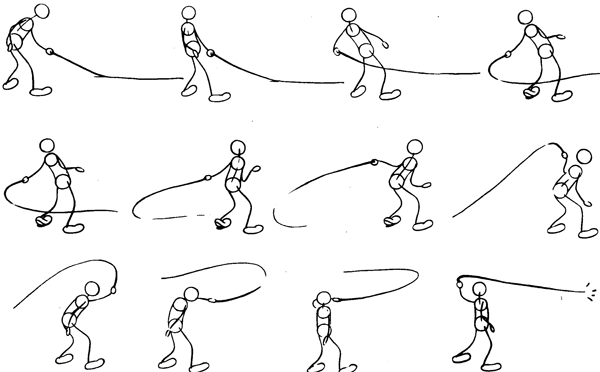 This is a wonderful action to analyze. Follow through, which is practically synonymous with action, is apparent in every phase of this analysis. As usual the hip pulls away from, then is followed by the shoulders and head. Last to join in the procession is the whip itself. Note how the whip continues to go forward for a considerable time after the body has started back in the reverse direction.