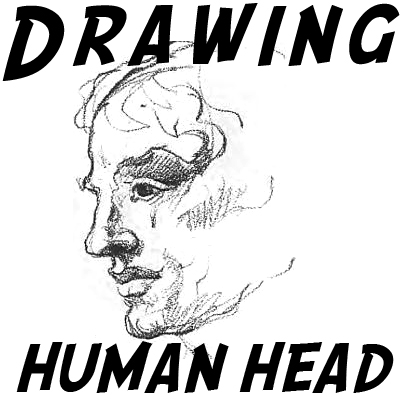 You can better understand the head in perspective by thinking of it as having six sides and being cube-like in structure. A cube establishes the front, side, bottom and top of the head quickly. After you can draw a cube in any position in perspective, then learn the bone structure and shape of the head and you will be able to place it in whatever position you choose.

The modeling of a head in light and shade becomes easier with the major planes established. On the front of the face, keep the forehead square, the cheek bones flat, the area under the nose and around the mouth round, and the jaw triangular.

While the length, breadth and thickness of features may vary on different people, it is important to have a basis from which to start.
When drawing the entire figure, first establish the size of the head in order to proportion the rest of the figure to its size. The length of the human ear is about the same as the distance between the eye-brow and the base of the nose. Draw a line through the center of the face and then draw a right angle to the line to give you the perspective of the ear.