Do you want to learn how to draw people? If so, learning how to draw the human face and head is a good place to start. But without some proper knowledge of simple measurements and proportions of a person’s face, your drawings might look strange out of of proportions. That is what this article will help you with. You will want to bookmark this page and come back when you need to draw the human head and face. Below, find out how to draw the face in profile view (side view), three-quarters view (3/4), and front view. Have fun and learn how to draw people with these following easy diagrams …illustrated for your guidance.

This drawing tutorial will help you in finding out what the distance is between the 2 eyes, where to place the ears and nose, how far down to draw the lips, where to draw the hair line, etc. 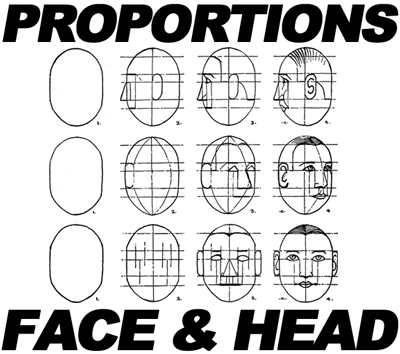 Now, there are six shapes of heads included in most classifications. The one that is best adapted to the artist’s purpose resembles an inverted pear—it is large at the top and tapers toward the chin. However, it will be easiest for you at first to make an oval for the outer contour of the head, as pictured below.

Proportions of the Face and Head : Front View Next, divide the length of the oval into three fairly equal parts, as pictured below. As a rule the width of the head is two-thirds that of its length. As you can see in the picture below. We turned the head on its side and then placed it on top of a head that was held upright…and the sideways head goes down 2 thirds the length of the upright head. The ears will equal the center third length of the head…from the top 1/3 line (eyebrows) to the bottom 1/3 lines (base of nose). The top starts on the line horizontal with the eyebrows, the base reaching to the nose, or midway between the nose and the upper lip in some individuals—in others more or less than the one-third length. See the picture below. The eyebrows cover two-thirds of the width of the forehead…but they vary in size from person to person so there isn’t an exact measurement for them.

The eye is equal to a third of the center third in width. So…First separate the width of the head into 3 equal parts like I did below. Both eyes are of equal size, and always one eye’s length apart. So think of measuring the distance between eyes by seeing a homely man with 3 eyes. 🙂 You can easily locate the inner corner of the eye by measuring off from the center line a distance of half an eye. In sketching women and children it is often advantageous to dispense with the nose by merely suggesting the nostrils, or a line, the shape of the nose and the base (nostrils and lobes) being left to the imagination.

Some common forms of the human ear.

One point to remember about the nose in front view is that the sides of the lobes are exactly on a perpendicular line with the inner corners of the eyes. Thus, as the eyes are an eye’s width apart, the nose (base) is an eye in width, and directly below in the intervening space. The nose may be long, short or medium, and of various shapes. The normal nose, however, is equal to about one-third of the face, or the size of the ear (from the eyebrow to the base of the nose). Normally it sets in the center of the length of the face.

Make a study of the nose. Draw a person’s nose as he or she sleeps. While asleep, people are quiet, and you can then make a careful, thorough study of this feature. Also study the nose of the child as well, for there is a great difference between the youthful nose and the aged. Mouths and Noses for Sketching Studies

The mouth is usually two eyes wide and is best located by drawing an imaginary line down from the center of each eye, thus touching the location of the corners of the mouth. The width of the middle third of the face (the third that has the nose in it), can be divided equally into thirds as well to find the upper portions of the lips (the letter ‘v’ shape at the top of the lips). Look at the picture below if this confuses you. Proportions of the Face and Head : Three-Quarters View

Draw the head as an oval and then divide the length of the oval into three fairly equal parts, as pictured below.

Now draw a convex line down the first third of the oval and then do it again on the other side, as pictured below. The ear will be within the middle third area, withing the last area behind the convex line….the ear is shaped like the letter “C.”

From this simple form you can easily and certainly develop the ear to a more natural picture of that anatomical feature. However, for cartoon and caricature purposes the “C-S” design, with variations, will be practical.

There are two distinct forms of the ear —the “C” and the triangle shape. Other ears are but variations or combinations of these two forms.

All designs of the curvatures within the ear surface seem to form more or less distinctly the letter “S.” In most cases the lower half of the “S” is smaller, especially in the case of the triangle shaped ear. The ear is large in the kindly individual, and usually small in the mean, violent person. An example of this is seen in the case of Abraham Lincoln, whose ears were large, and, on the other extreme, in the prize fighter, who usually has a small, cauliflowered ear, though this, like all rules, has its exceptions.

The nose at this view can be expressed in a triangular shape, with the point at the top.

Proportions of the Face and Head : Profile View / Side

For the beginner the profile view is usually easiest to draw.

Draw the head as an oval and then divide the length of the oval into three fairly equal parts, as with the front and three-quarter views. Draw a line down the center of the oval, as in the front view.

The eye will be shown by a triangle of the first half-length within the first third of the head. The hair covering the temple will be within the space of the third area, which touches the center line. So, as you can see in the picture below. In the top third of the top 1/3 portion of the head is the hair line. In the top third of the 2nd 1/3 portion of the head, is where the sideburn is…and it ends at about the center line of the head, where the ear is. This all sounds confusing so just look at the picture below. Within the second half will be the ear, starting at the center line, “C”-shaped, covering two-thirds of this area. So, in other words, between the eyebrow (top 1/3 line) and the base of the nose (bottom 1/3 line), is the ear…and right along the vertical center line. The picture below will explain all. If you divide the left half of the face into thirds, then the mouth can be represented by a triangle, within the first third as you can see below. This is an original method which I have found, in teaching students and others, works exceptionally well because of the use of “three” for every measurement, which makes the measurements easy to remember. Steps to be taken in working out a cartoon head.