Ninety percent of your work as a professional cartoonist will have to be done within a panel, so you can see how important it is for you to understand the problems that you will come up against. The panel is your stage and it is your job to put the characters and actors in it. Where and how you place them will have a lot to do with the success of your feature. For the time being, don’t worry too much about backgrounds. For now, we are more interested in the proper placing of the figure in the panel. 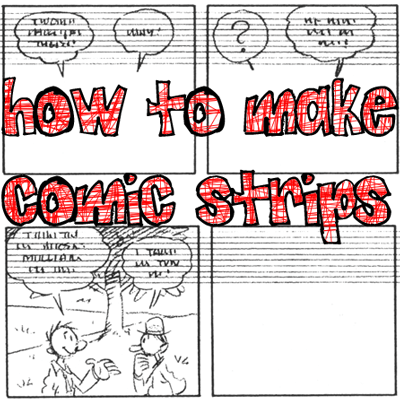 Lots of beginners start off by drawing the figure first and then, if they like it, drawing a panel around it and finally the background. This would be swell if you never had to worry about the size or shape of your panel. But cartooning in respect to panels and proportions of panels is an exact art. An editor asks you for a cartoon panel of a certain size. The site he asks for is the size he wants — and he will mark you off his list if you don’t give it to him. Normally you will work larger than the site the drawing is to be reproduced, so you must be sure that the panel will reduce to the size desired. The only way to be sure of this is to scale up your panel to the correct proportions. After checking it, you can start your drawing. Space in a newspaper or magazine is valuable. If you should send a drawing to an editor, and that drawing is the wrong site — say an inch and a half too high — he has two choices. He can throw the drawing away or have it redrawn. If he doesn’t have time for redrawing, he may use your work, but he will be robbing himself of an inch and a half of valuable space that could be sold for advertising. Here’s another reason for learning to draw in a panel frame. If the beginner starts out just drawing any old place he feels like on a piece of paper, he soon becomes accustomed to working that way. When he is given a picture frame and told to draw a figure in it, he doesn’t know how to proceed. The panel frame has a psychological effect upon his sense of proportion. He won’t know where to start drawing the head or the figure. When he does start it, chances are the feet will run out of the bottom of the picture. Drawing is a habit — and for your own future good you should develop, as you go along, habits which will help, not hinder you.

Your panel can show a thousand miles of territory or it can show just the hand of a character. Think of it as a cameraman does in the movies. Before starting to pencil in a panel, decide whether you want a distance shot or a close-up. Most of the time the story you are telling and the action of each individual panel will determine how much or how little you will show. If you are going to show a cowboy being thrown from a hone, you wouldn’t want a close-up of the cowboy’s head; you would need enough distance to show the whole action. If the cowboy is go- ing to wink at a girl, you would want a close-up shot By thinking first, you will save yourself a lot of trouble.

As you will see later on in this lesson, the placing of the figures themselves within the picture frame will in any times set a mood for the over-all scene. This placement of cartoon figures for their mood value is very important to putting over an idea. Many times our daily comic strip of four panel will be best when all the figures in all four panels are placed exactly on the same level. Again, on the very next strip you might find that Panel I will show a full figure; Panel 2 a close-up; Panel 3 a far-distance shot; and Panel 4 another close-up. This is known as “change of pace.” This change of pace is very important and adds color and interest to your work, but be sure there is a reason for it.

Also in this lesson we will take up the procedure for drawing a Sunday page or a daily newspaper comic. The differences between drawing a single panel cartoon and a daily comic strip are quite fundamental. With a single panel cartoon, the artist is more concerned with putting over one individual idea, usually with a wall6p. He is not particularly concerned with what came before or what came after — the whole idea is shown in one panel. The artist drawing the comic strip, on the other hand, is concerned with first putting across his idea — not in one panel, but in a series of panels. He must carry his reader’s interest from the first through to the last panel and at the same time tell his story, both visually and by the use of the balloons.

The panel is your stage

Someone once said that every cartoonist is a frustrated ham actor. Since the average cartoonist usually eats with more regularity than the average actor, the frustration should be easy to control. A cartoonist’s interest in the stage can really be an asset. The panel has its definite limitations — so has the stage. Your job is to present a clear, interesting production within your confined space.

Milton Caniff had a close squeak when he almost became a professional actor after college. Today, his advice to a young cartoonist is apt to be full of stage and movie lingo. The business of stage settings, movie close-ups and long-shots also applies very pointedly to drawings. Caniff’s “Steve Canyon” doesn’t suffer because of his knowledge. Neither will your work.

When we tell you to accustom yourself to working in a panel, we don’t mean just for your finished art work. You should also work in a panel when you are doing practice work. For your practice work on these lessons, rule up a bunch of panels beforehand on your paper. It doesn’t make any difference what size or shape the panels are, just so there is a panel outline to confine you to a given space. Once you have formed the habit of thinking as well as drawing in panels, you will find that you prefer to work inside of panel frames. 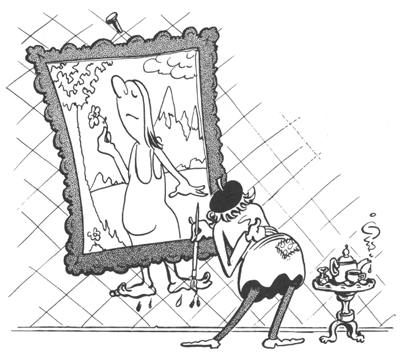 CLICK BELOW TO GO TO THE NEXT PAGE : POSITIONING CHARACTERS IN YOUR STRIPS