Do you want to learn how to draw Gir holding his stuffed pet piggy. Invader Zim is back on the air, on NickToons, and it has become more popular than ever. I watched it a few times this week and it is hilarious! I drew this on our new online drawing application so you can watch me draw GIR and Piggy on this video if you want. Or just follow the following drawing lesson steps below. Have fun 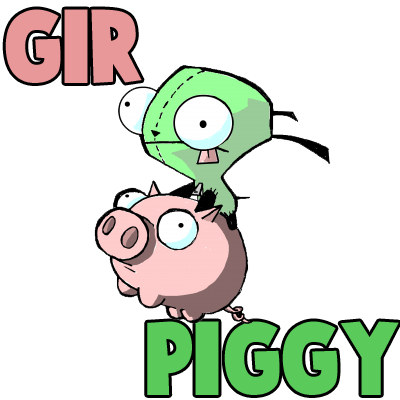 Firstly draw 2 circles…the one on the right is slightly bigger, and slightly lower. Draw a line that goes behind the right eye.

Draw a capital letter ‘L that is slightly curved on the first line and on the second line it is slightly dipped downwards.

Also draw the tongue..a shape that sort of looks like a sideways, capital letter ‘E’. 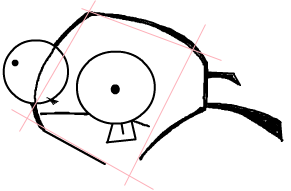 To get the shape of GIR’s face right.you  might want to lightly draw a diamond-like shape. Now that you did that…draw the curved shape around this diamond. This makes it a bit easier to figure out how to draw him. Also draw the nose…an upside down triangle. 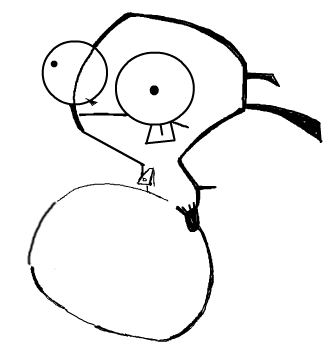 Draw the zipper pull and the right arm.Now draw an oval shape below GIR. 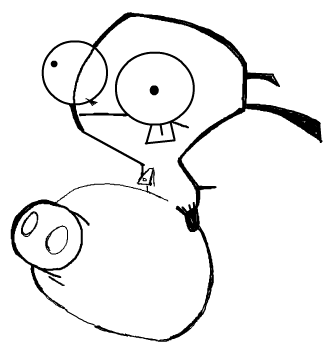 Now draw Piggy’s nose…an oval with 2 smaller ovals inside of it (the one closer to you is larger). 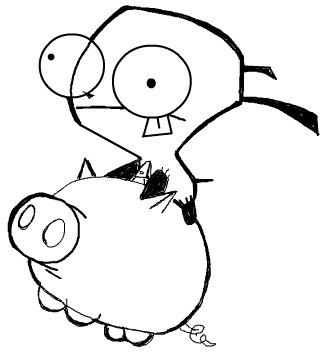 Draw a triangle for the first ear and for the ear to the right draw a triangle with a line down the center. Draw GIR’s other legs. Draw 2 sideways number ‘3’ shapes for the 4 feet. For the tail….just draw 2 loop-de-loops…as if you were drawing 2 lowercase, cursive, ‘e’s. 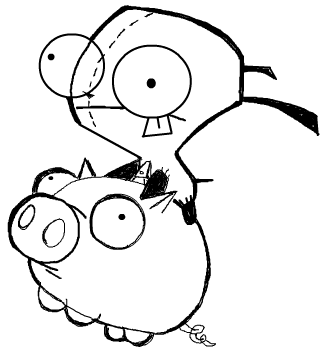 Add the stitching on GIR’s face as little dashes and also add Piggy’s eyes…..a circle on the right (with a dot inside of it)…and draw a backwards letter ‘c’ for the left eye…with a dot in it also. 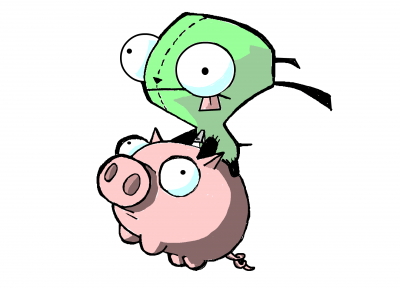 This is what Gir holding Piggy looks like when he is done. If you want to Watch Me Draw Gir and Piggy in a Video Lesson instead, click on the link.