I always loved to draw, but I still remember my favorite drawing lesson ever taught in school … Perspective Drawing. I believe that I was in either 7th or 8th grade and usually I had to pretend that art was a boring class, but I couldn’t hold in my excitement when I saw the amazing drawings that could be created with just a few easy perspective drawing tricks. The entire walls of my bedroom were filled with drawings that I had created with my new found knowledge. I hope that you enjoy this easy lesson in perspective drawing. I will try to keep things simple and not travel too far into the advanced methods of perspective drawing.

You Might Enjoy Our Other Perspective Drawing Tutorials as Well 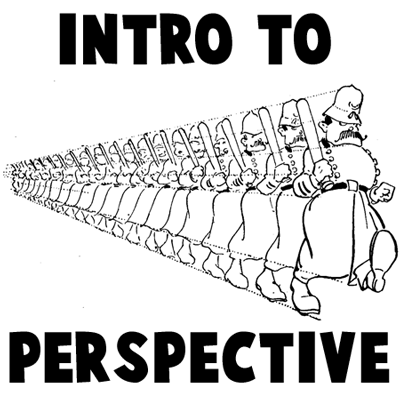 After you master the lessons of perspective that I lay down for you today, drawing in general will become much easier for you as drawing 3-dimensional objects on a 2-dimensional piece of paper will all make much more sense to you. I promise you this. However, we are not going to dive into any complex perspective drawing techniques today. This is a beginners perspective drawing tutorial that is meant to be within the grasp of an ordinary student without advanced mathematical knowledge … so don’t you worry.

(2) The Horizon (or Horizontal Line) resembles that horizon or boundary line that seems to part the ocean or ground from the sky, forming this joining line.

(4) The horizon line and Point of Site corresponds with where the viewer is (moves with the viewer). If the position of the viewer, or artist, is low (as in #3), the point of site and horizon line will be also low. On the other hand, if the artist moves up, the horizon line also moves up as well. 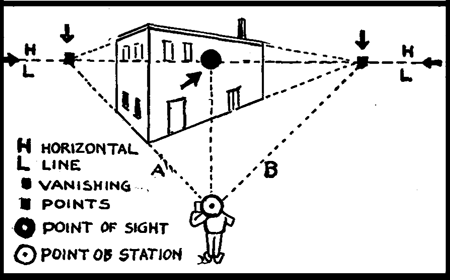 (5) This picture shows the 4 principal points and lines in perspective drawing. The human figure is not important in this picture, and not to be considered as part of this picture any more than the dotted lines are.

(9) A correct drawing of the sides, ceiling, and floor of a enclosed room or hall should have only one vanishing point, specifically, the point of site. 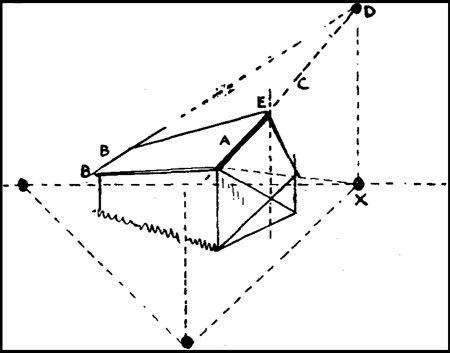 RULE # 1 – Lines and figures in planes parallel to the picture planes, that is, facing you, retain their original relations and forms. Thus, parallel lines will be presented parallel; a square will remain a square; a circle will remain a circle, etc.

RULE #2 – Parallel lines not parallel to the picture plane appear to converge or come together. In terms of perspective, they are said to vanish. The point at which they would meet if sufficiently projected is called their vanishing point. Whatever the number of lines, if parallel to each other, they will all converge to the same vanishing point.

This long straight street of houses appear to meet in the distance at the vanishing point.

For example, if you stand looking down a long, straight, level street, the houses will appear to meet in the distance at the vanishing point (as seen above). 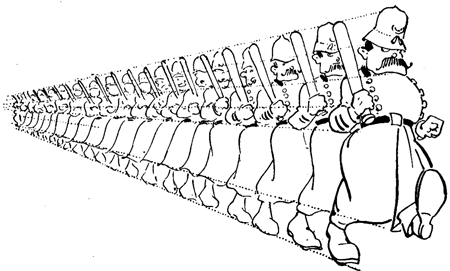 In this picture there are soldiers marching in a straight line. The last man is almost indistinguishable because he is at the vanishing point.

If you are looking at a long procession of men, marching in a straight line with the line of your point of sight, the last man is almost indistinguishable. He is at the vanishing point, for our intent and purposes. 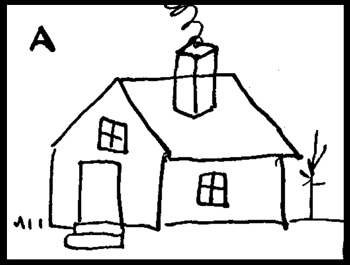 This is a drawing of a house made by a young boy who lacked knowledge of the rules of perspective. 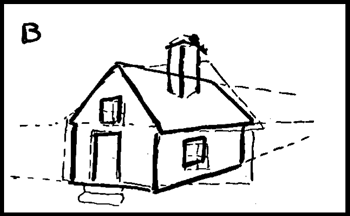 Correction of Picture A

When you draw a house like ‘A’ (pictured above), explain where the drawing was wrong, as shown in ‘B’ (also pictured above). In picture ‘B’, we have shown where picture ‘A’ was drawn wrong, showing the manner of finding the proper vanishing point and horizon line. In more simple language, the lines of the sides of the house recede to the vanishing point as shown in ‘B’. In ‘B’, the dark and dotted lines show how the house should have been drawn, the light lines being those of the original and the dashed lines those of perspective. 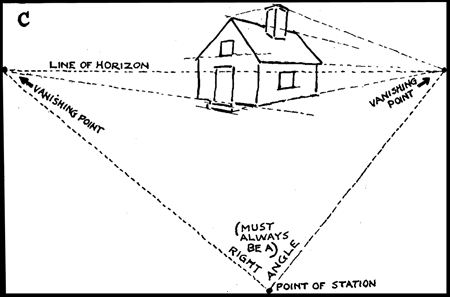 Picture ‘C’ shows how the correct drawing was made.

When drawing the houses in this picture, it is pretty easy to establish the point of sight and vanishing point, because they are the same. The lines in the houses that recede from the viewer converge to those points. The sides of the houses (C) being parallel to the horizon line, have no vanishing point.

(1) The Point of Sight is the spot which the spectator sees when he looks straight before him.

The Point of Sight Becomes a Vanishing Point for all lines (to the right and left of the viewer) that are at right angles to the upper and lower borders of the parallelogram containing the picture.

A large box, open at one end, has its front and back lines in parallel perspective if the opening is parallel with the body of the viewer as he faces it, while the lines of the sides, top and bottom, recede directly from him. In this case, the point of sight becomes the vanishing point, because all the straight lines receding from the sight converge (come together) on this point.

On the contrary, the nearest and furthest lines of the top and bottom of the box being, both in reality and in the drawing, parallel, must be so drawn. These lines, however far they may be extended, would never meet. Whereas, all lines that recede from the viewer would meet if continued sufficiently.

The box should now be turned around so that one edge is toward the viewer; thus 2 sides will be seen, each of which will require its own vanishing point.

In a Picture, There is But One Point of Sight. – There can be several vanishing points. A picture should never contain more than that which can be seen without moving the head. This area is comprised generally within an angle of 60 degrees, or one-sixth (1/6) of everything the artist could see if he turned completely around as he would in order to sketch a panoramic view, which, however, does not come within the scope of this lesson.

Each Vanishing Point Determined by Point of Station. – The point of station is somewhere in front of the landscape or picture, and is, in fact, the eye of the viewer. The distance of the viewer should be at a distance less than the front dimensions of the scene to be enclosed in the picture. That is to say, if the front line of the scene to appear in the picture was one hundred feet wide, the artist should not be stationed more than one hundred feet from the nearest object that appears in the picture. He may, and in most instances should, however, be stationed much nearer.

Two lines drawn from each of the vanishing points to the point of station should invariably form a right angle.

In the study of perspective it will be helpful to keep the following definitions and rules in mind. Even those already versed in art, through disuse, are prone to forget some of the simplest definitions.

A right line is a perfectly straight line in a position or direction. Parallel lines are lines which are the same distance from each other throughout their length, whether straight or curved.

A horizontal line is one which is parallel to the earth’s surface of the sea level.

A vertical line is a perfectly upright one, pointing to the vertex or zenith and to the center of the earth.

A perpendicular line is a line at right angles to any other straight line, but is not necessarily vertical.

A plane is a perfectly level surface, which may be either horizontal, vertical, or inclined in any direction.

A straight rod applied to any such surface would touch it throughout its length and breadth. A line is said to be in a certain plane when throughout its length it touches the plane, or coincides with it. In perspective, the picture plane is the surface, paper, canvas or, whatever it may be upon which the drawing is made. This is always supposed to be at right angles to the direction in which the spectator is looking. If we are standing erect, and looking straight in front of us, the picture plane will be vertical : for instance, if the picture were placed close to an ordinary wall, the picture plane would be vertical. A point on the picture plane exactly opposite the eye is called the center of vision. The horizontal line indicates on the paper the position of the natural horizon. It will be higher or lower, according to the position of the viewer. If the latter stands on a hill, the horizon line would be high. If he stands on a level with the sea beach, the horizon line will be low.

The 3 principal methods of representing objects are orthographic, isometrical and perspective projection. Linear perspective is the only one with which we deal.

The same boy drew the four houses shown in Fig 14. In Fig 15 the houses are drawn according to the simple rules of perspective shown here in this tutorial.
You Might Enjoy Our Other Perspective Drawing Tutorials as Well