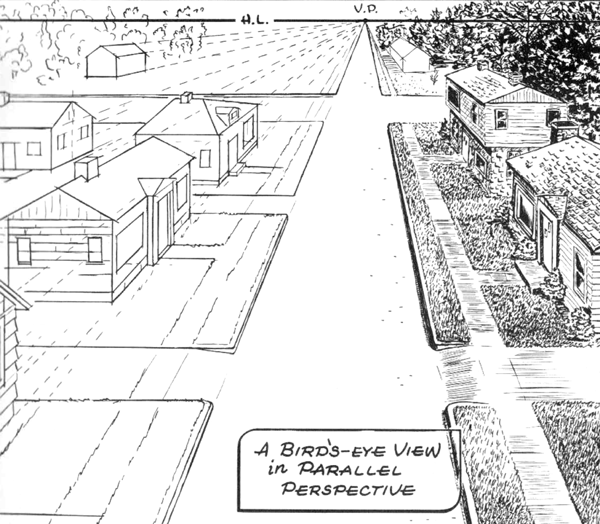 This above picture may seem difficult to you, but don’t let it “scare” you. Never be afraid of drawing! As has been said, it is not my purpose in this to develop master artists, but to show you the way to fun self-creation in art. Therefore, in our lesson we shall take it easy—doing the best we are able to, and not worrying too much about the results.

Study the above illustration, and you will note that the houses are really basically boxes in form—drawn to a single vanishing point. To the left of the picture, you will see the method of constructing the houses, while to the right of the picture are shown suggestions of simple renderings.

In starting to draw this picture first establish your horizon line quite high on your paper, allowing sufficient room for your houses which are shown below eye level. On this horizon line place your vanishing point and proceed to first draw in the street, converging to the vanishing point. Now establish the frames of the houses, first drawing their basic forms in the shapes of boxes; then proceed to add the roofs, and finally the architectural detail.

Up to this point we have been concerned only with objects which have been parallel to our line of sight, or what we know as parallel or one-point perspective. Instead of seeing one face of the object parallel to our line of vision (as in true parallel perspective), we shall now learn how to draw objects which are viewed at an angle. Whether the top or bottom of the object may be seen is determined by its relationship to the horizon line. Thus when objects are viewed at an angle we term this angular perspective. In as much as we are now concerned with two sides – an individual vanishing point is needed on the horizon line for the perspective construction of each side. Therefore, to repeat, in angular perspective we use two vanishing points to draw our sides. 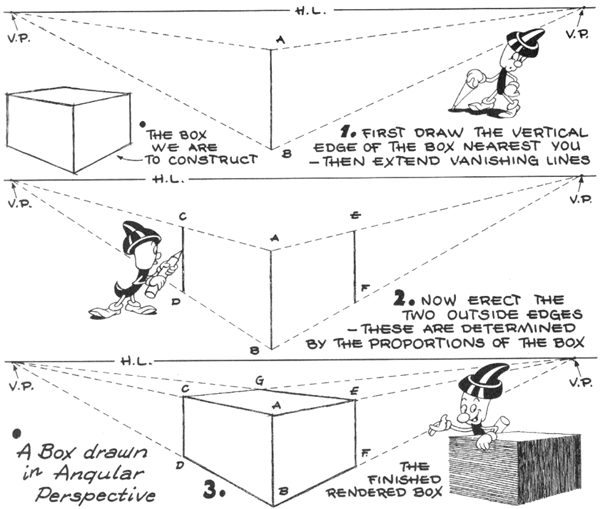 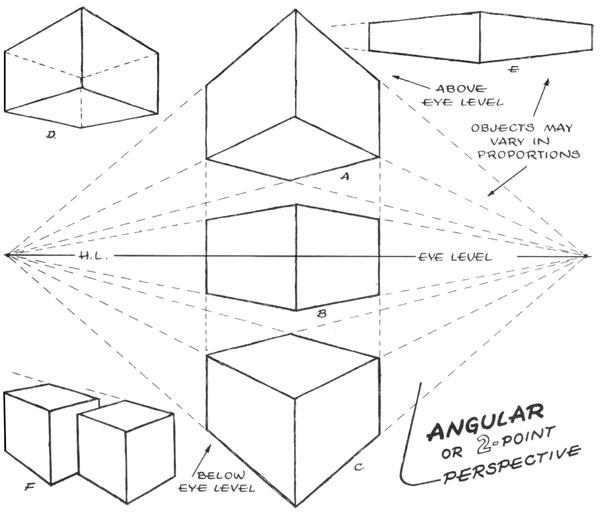 In the further study of drawing objects at an angular view, we shall learn how a box is observed in relationship to its horizon line. In Fig. A, the box is shown above the eye level, in Fig. B, it is on a plane with our eye level, and in Fig. C, it is viewed from an angle below eye level. Particularly notice in diagram C that each side recedes as it is seen in the distance. If these sides were to be extended each would eventually meet at its imaginary vanishing point. This premise would hold true also in the other drawings of the box. To emphasize, we of course know that in actuality the edges of each box are parallel to each other, but in a perspective drawing. they are shown as converging or becoming narrower in height as they recede. In order to create greater interest in compositions, most objects are drawn in angular perspective in pictures, and it is important to remember the above facts. You have been instructed to first establish the edge of the box nearest you—the other edges are determined by the proportions of the object. The top or bottom of the box should be drawn last. 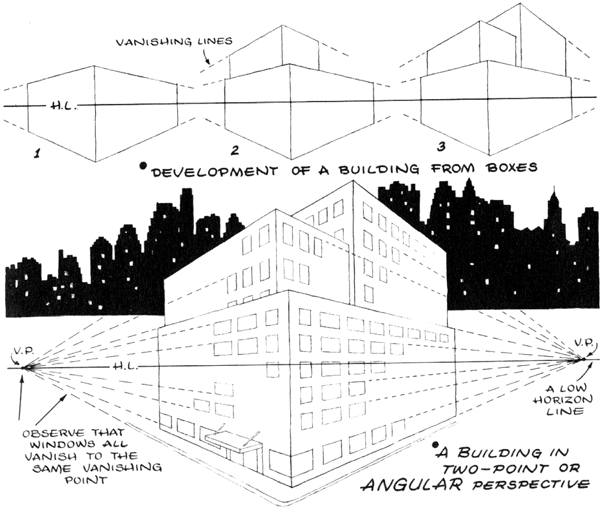 The drawing of the building may appear complicated, but it is really not difficult to execute. At the top of the diagram is shown three successive steps in its construction: First, draw a box so constructed that its horizon line is slightly above center; second, add a second box on top of the first—thus forming another tier to the building; third, next to the latter, a third box is added, somewhat larger, which will add height to the building. Make certain that all edges of the boxes vanish to the left and right to their respective vanishing points. Remember that the two vanishing points are both on a single horizon line.

Now that the basic skeleton of our building is constructed, proceed to draw in the windows, doors, etc. Note that as the windows recede into the distance, they appear to be smaller and closer together. Observe this optical illusion through studying an actual building. Windows, etc., on the left side of the building will vanish to the left vanishing point, while those to the right will vanish to the right vanishing point. Note particularly the manner in which the marquis vanishes. Your building may be made more convincing by adding cornices, suggesting texture, etc. 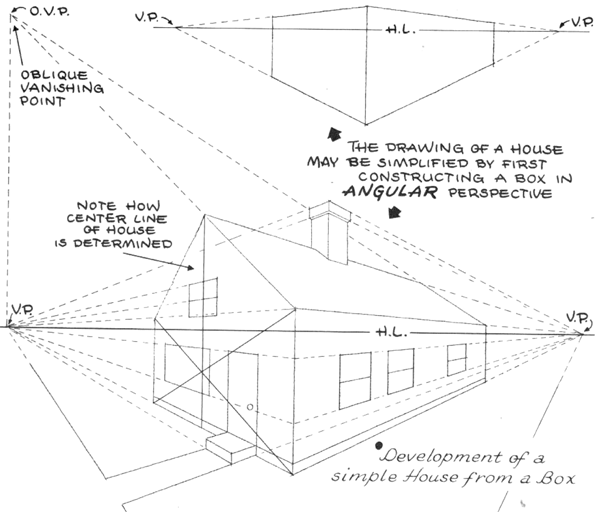 It will be my purpose to make each of these lessons exciting and challenging. More important. is that following this simplified instruction, you can execute these problems with relative ease. Remember, you don’t have to have talent to draw!

We are continuing to deal with angular perspective. In our top view is shown the basic box construction of the house. Observe that it is drawn both above and below the horizon line. 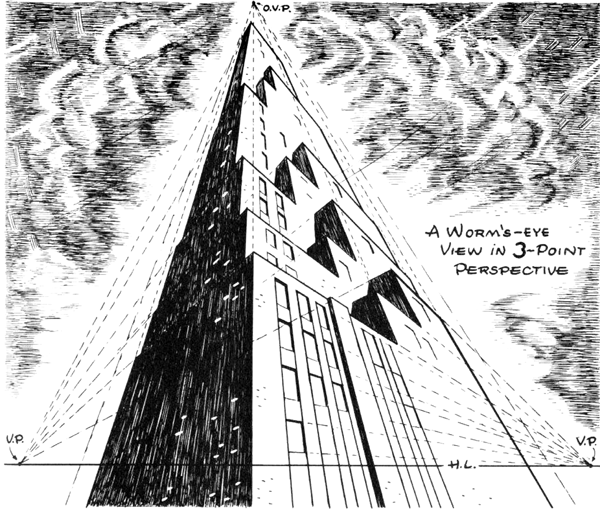 Now we shall make a drawing of a skyscraper looking up at it. This representation in perspective is referred to as a worm’s eye view. We proceed to construct this quite similarly to that of the previous building.

In order to accentuate the height of the skyscraper use a low horizon line—keeping your two vanishing points widely separated. If you wish to draw a skyscraper “looking down” on it from above, this may he accomplished by placing your oblique vanishing point considerably beneath the horizon line. Proceed then to construct the building similarly to that of above. Drawing an object from a skyward position is termed a bird’s-eye view.You will find me often repeating myself in these lessons. Please bear with me, as I believe in using repetition as the best type of instruction.