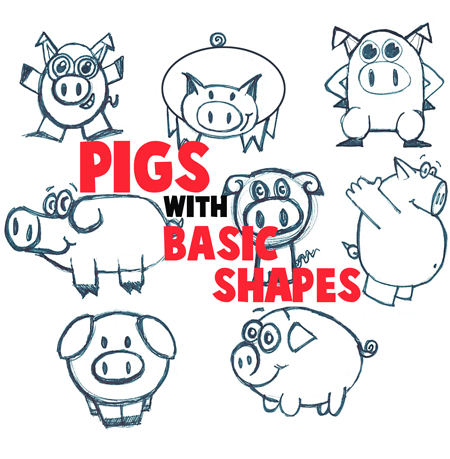 This guide will show you how to draw many different pigs…all with simple shapes, letters, and numbers. If you can draw numbers and letters than you can also draw these comic-styled pigs. There are several pig drawing tutorials below and you can take bits and pieces from each of these tutorials to creatively design your own pig character.

Firstly Lets Think About What Features Real Pigs Have 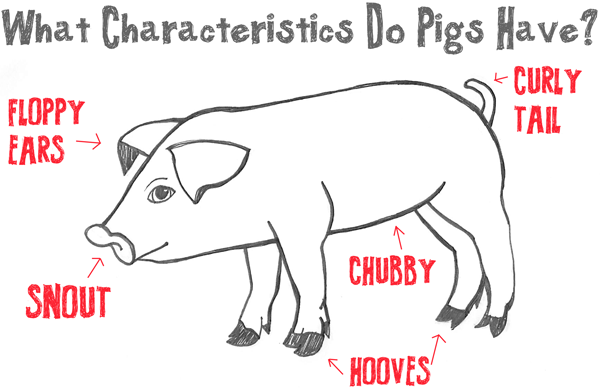 When drawing a cartoon character of an animal, you first have to think about what sort of ‘features’ or ‘characteristics’ that animal has. So lets look at a pig…most pigs will have the following features:

As we draw our pigs, we can play with those features to make silly looking creatures. But, as we do this, we have to make sure that the drawing always looks like a pig. Think of cartoons as caricatures of people and animals. Get as silly and playful as you want to. DRAWING SHOULD ALWAYS BE FUN!!!

Below you will find several drawing lessons. All of these use basic shapes to draw cartoon pigs. If you want to go even further to draw more complicated cartoon pigs, there are several tutorials that will help you. Here are More Cartoon Pig Lessons to Take a Look At. You can build your own cartoon pigs by using bits and pieces from these tutorials.

Easiest Pigs Made from Ovals 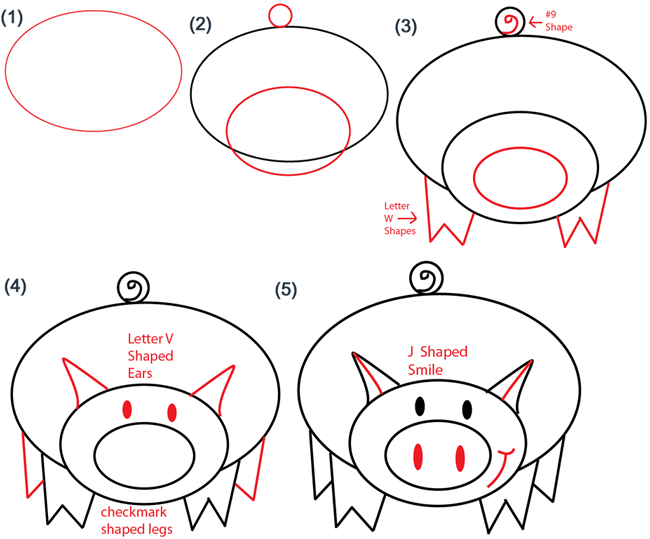 This a very easy pig to draw and is a good starter tutorial for young children. Here are the steps.

(2) Draw another oval for head. Draw a circle for the tail. 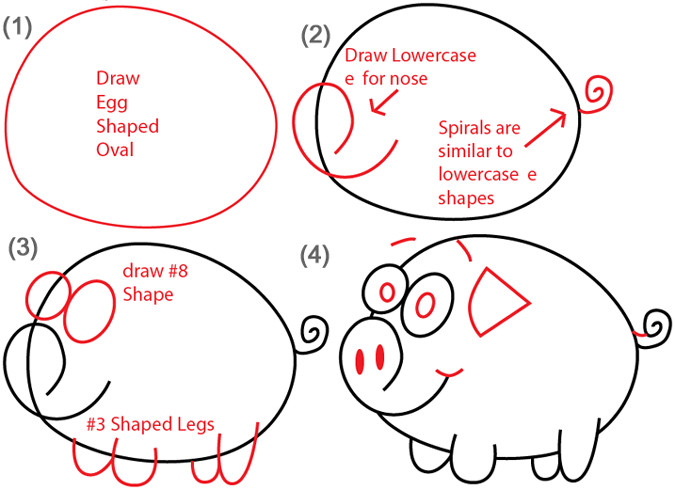 I know that you can draw this cute little piggy if you follow these basic steps.

(4) Draw ovals for the nostrils and the pupils of the eye. Draw curved lines for brows and cheek. Draw a triangle-ish ear. 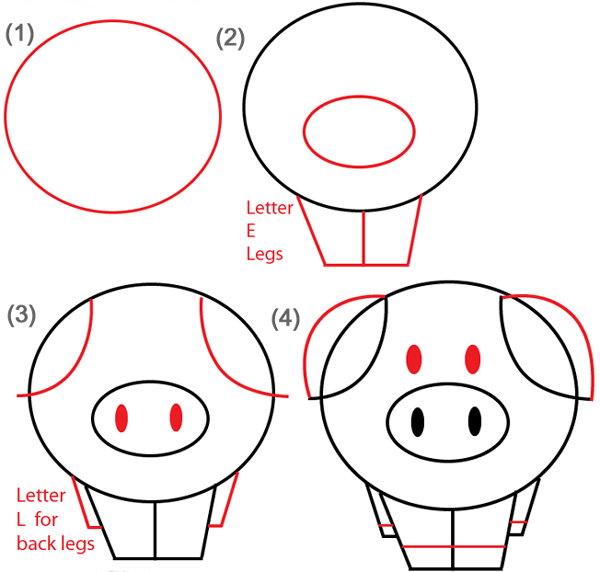 Here is another simple cartoon pig to draw.

(1) Start by drawing a circle (doesn’t need to be perfect).

(3) Draw a capital letter ‘L’ for each back leg. Draw oval nostrils. Draw a curved line for each ear.

(4) draw oval eyes. Draw another curved line for each ear. Draw a line in each leg. 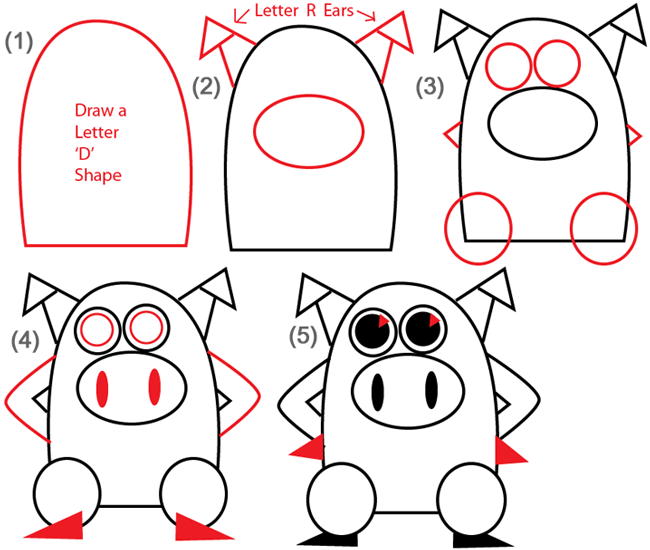 This is another easy piggy to draw. All the shapes are very basic.

(2) Draw a letter ‘R’ shape for each ear. The letter ‘R’s are angular but still look like letter ‘R’s. Draw an oval for the snout.

(3) Draw circle thighs and eyes. Draw a sideways letter ‘V’ on both sides of the body.

(4). Draw another circle within each eye. Draw oval nostrils. Draw another, larger, sideways letter ‘v’ on both sides of the body. Draw a triangle for each hoof. 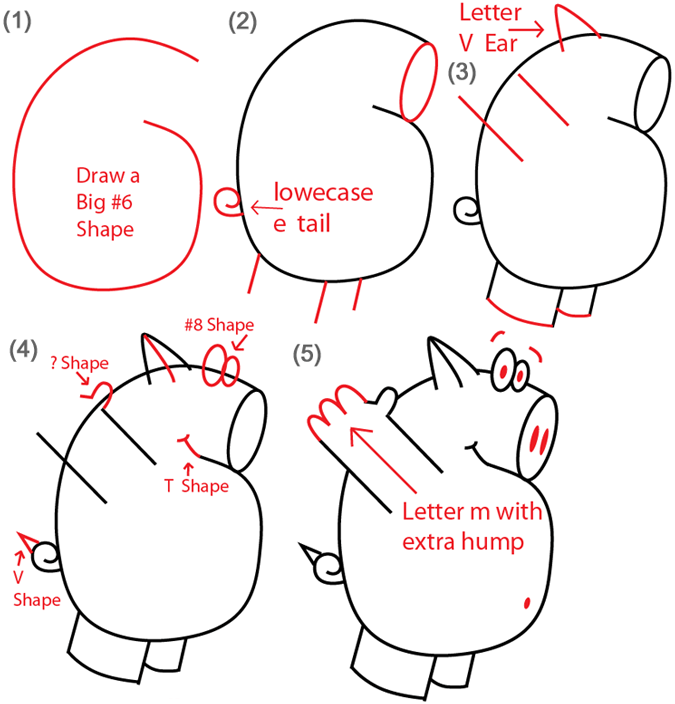 This is my favorite cartoon piggy…I hope you like it. Here are the steps. 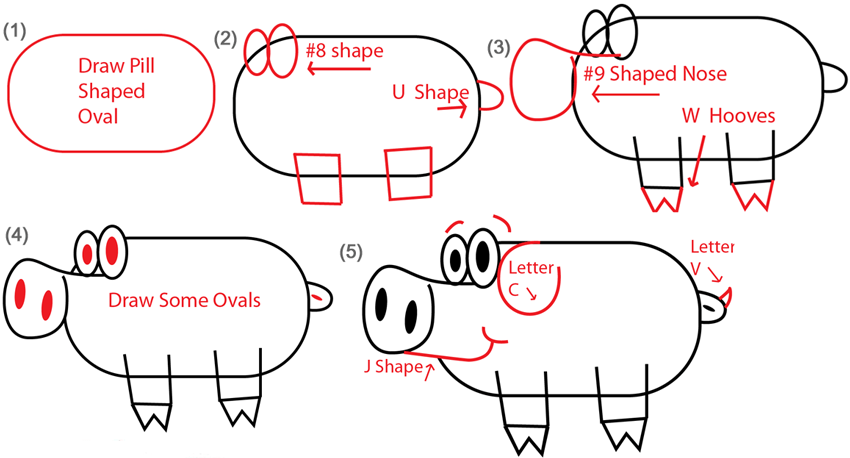 This is also a cute piggy and not so hard to draw. Here are the steps.

Now Create Your Own Pig Creations

Now you know how to draw some basic-shaped cartoon pigs. Here are More Cartoon Pig Lessons to Take a Look At. Now it is time to mix and match what you have learned and make up your own pig creations. Post your pig drawings – we would love to see them. Make them funny by adding funny captions. Have fun!!!