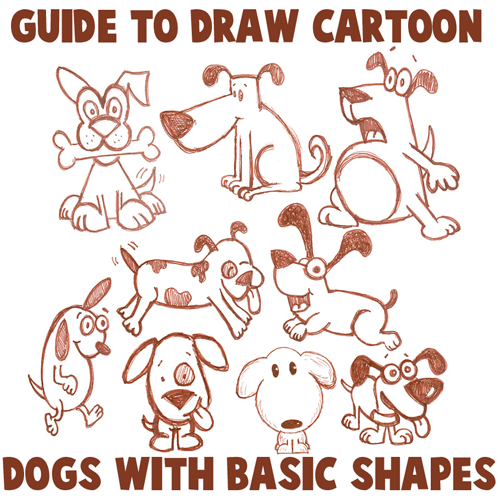 This guide will show you how to draw many different dogs…all with simple shapes, letters, and numbers. If you can draw numbers and letters than you can also draw these comic-styled dogs. There are several dog drawing tutorials below and you can take bits and pieces from each of these tutorials to creatively design your own doggycharacter.

Firstly Lets Think About What Features Real Dog Have 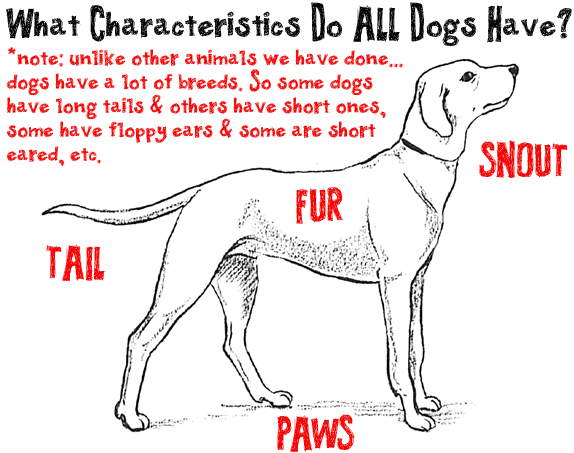 When drawing a cartoon character of an animal, you first have to think about what sort of ‘features’ or ‘characteristics’ that this animal has. So lets look at a dog…all dogs with have the  following features:

Unlike the other animals we have made large drawing guides for, dogs have many breeds. So we can’t say that all dogs have long droopy ears or all dogs have bushy fur because there are so many different breeds of dogs. As we draw our dogs, we can play with those features to make silly looking creatures. But, as we do this, we have to make sure that the drawing always looks like a dog. Think of cartoons as caricatures of people and animals. Get as silly and playful as you want to. DRAWING SHOULD ALWAYS BE FUN!!!

Below you will find several drawing lessons. All of these use basic shapes to draw cartoon dogs. If you want to go even further to draw more complicated cartoon dogs, there are several tutorials that will help you. Here are More Cartoon Dog Lessons to Take a Look At. You can build your own cartoon pigs by using bits and pieces from these tutorials. 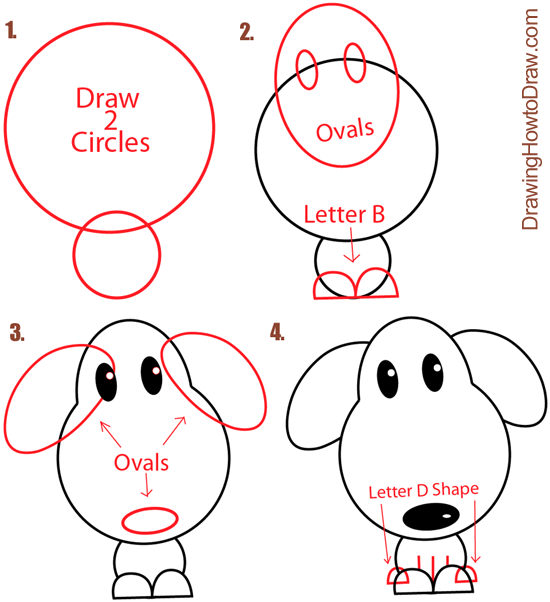 This is one of the easiest tutorials within this guide. Just pay attention to the following step by step instructions:

(2)  Draw a few ovals. Draw a sideways capital letter B for the feet.

(3) Draw oval ears and nose. Draw a little circle in the eyes…then fill in the rest of the oval with black.

(5) Erase any lines that you don’t need any more. 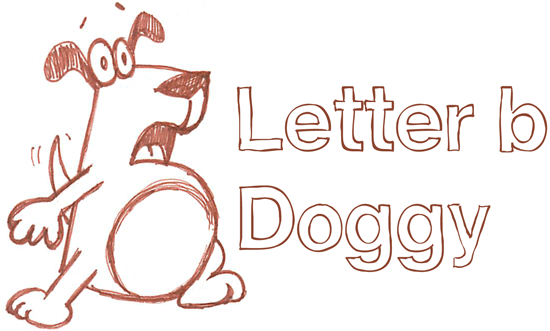 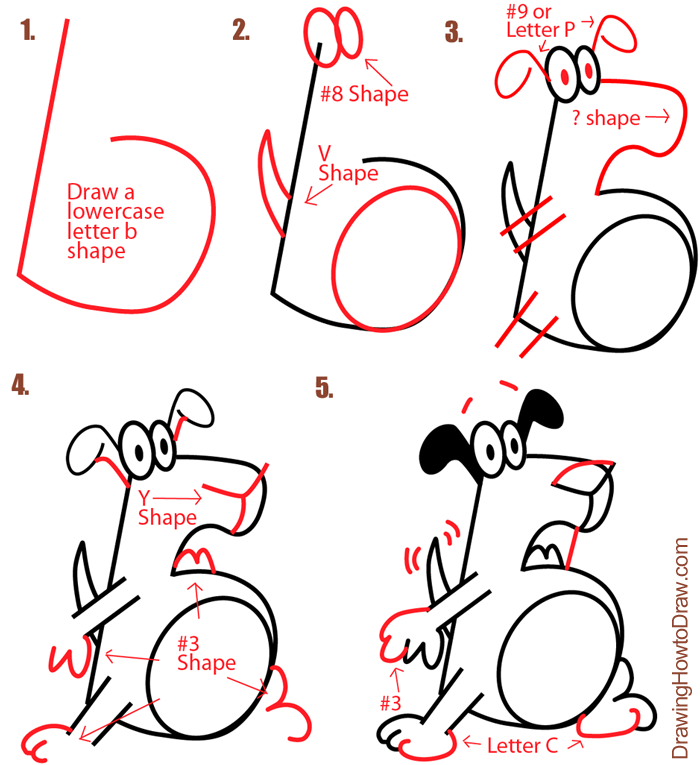 This dog is created by starting his body off with a lowercase letter b. Lets find out how to draw it with the steps below:

1. Draw a lowercase letter ‘b’ shape.

2. Draw a sideways #8 shape for eyes. Draw a letter ‘v’ shape for the tail and an oval inside the belly.

6. Erase and remaining lines that aren’t needed any longer.

Drawing a Dog with a Capital Letter B 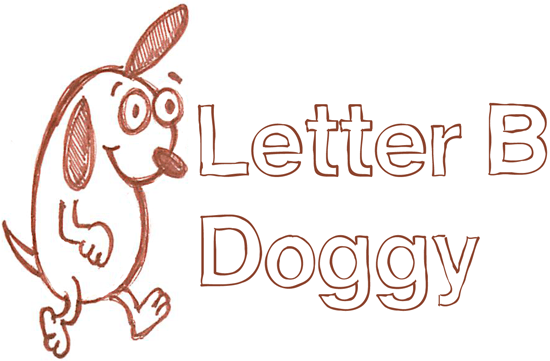 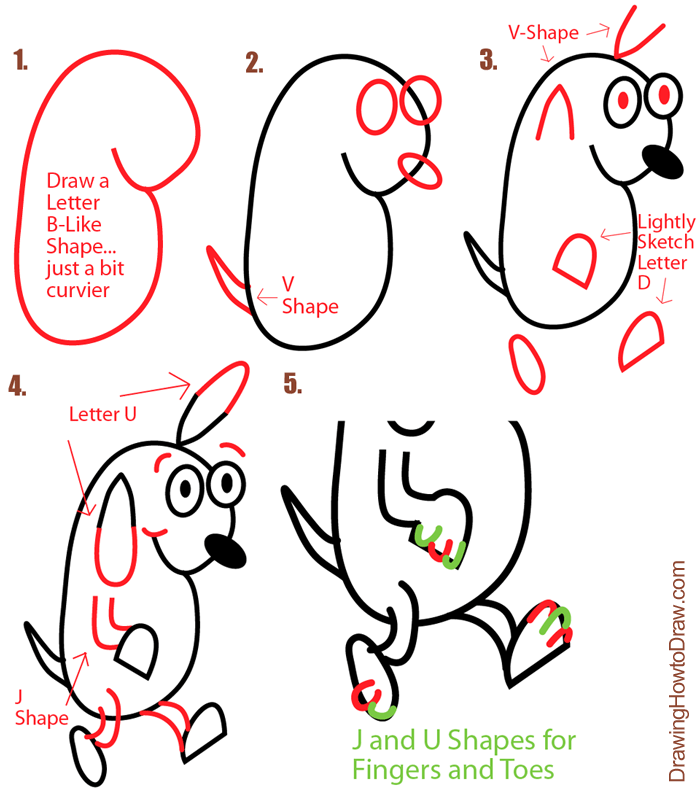 With this cartoon dog, we will be starting off his body by drawing a capital letter B. Lets see how to draw it:

(1) Draw a capital letter B that is a bit curvy.

(4) Draw 2 letter ‘J’ shapes for arms. Draw 2 curved lines for each leg. Finish off each ear with a letter ‘U’ shape. Draw brows.

(6) Erase any lines that are no longer needed.

How to Draw a Lowercase Letter e Puppy 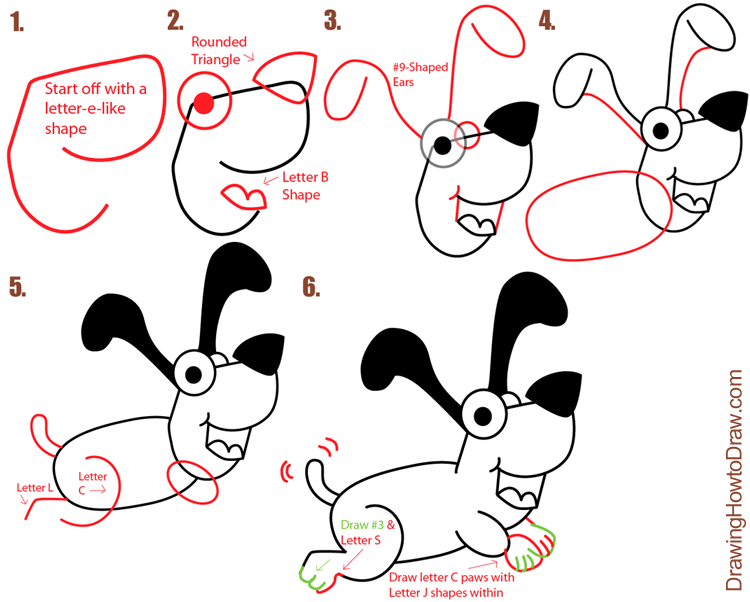 This dog is running around happily and we can start drawing him by using a lowercase letter ‘e’ shape. Find out how below:

1. Draw a shape that is similar to a lowercase letter ‘e’

2. Draw a sideways capital letter ‘B’ shape. Then draw a rounded triangle shape for the nose and 2 circles for the first eye.

3. Next draw ears that look like #9 shapes. Draw a 2nd circle for the back eye and draw a few other details.

4. Draw an oval for the body and finish off the ears with curved lines.

6. Draw 2 curved lines on either side of the tail. Draw letter ‘C’ shaped paws with letter ‘J’ shapes within them. Also draw a #3 and a letter ‘S’ shape for the back paw.

7. Erase and lines that are no longer needed.

How to Draw a Simple Letter J Dog 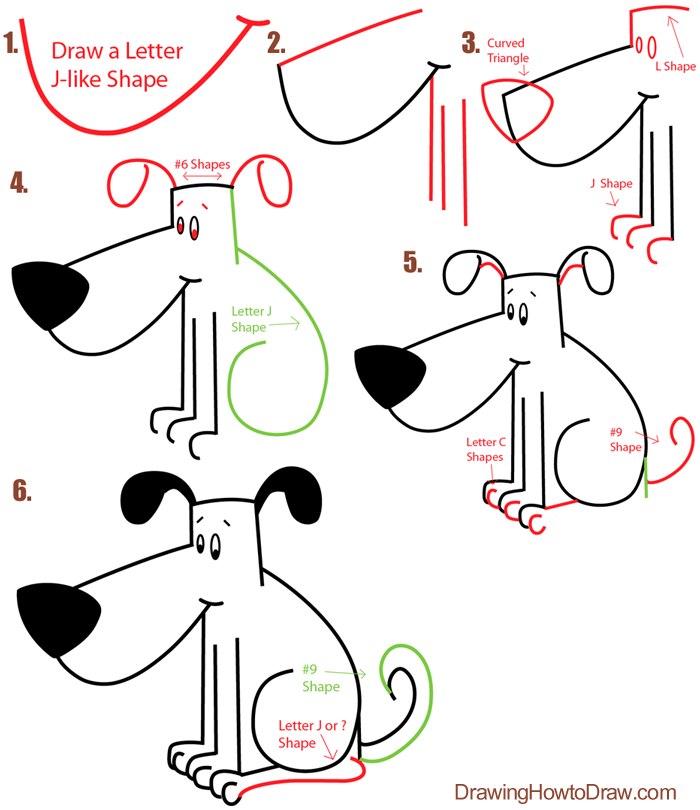 This dog is really cute…and you won’t have too many problems drawing him once you read the instructions below:

3. Draw a curved triangle. Draw an ‘L’ shape at the top of the head as well as 2 ovals for eyes. Draw letter ‘J’ shapes on the feet.

4. Draw a letter ‘J’ shape. Draw ovals inside the eyes and draw #6 shapes for ears.

5. Finish off the ears with curved lines. Draw letter ‘C’ shapes for toes. Draw a #9 shape for the tail.

7. Erase any lines that are no longer needed.

How to Draw an Oval Shaped Dog 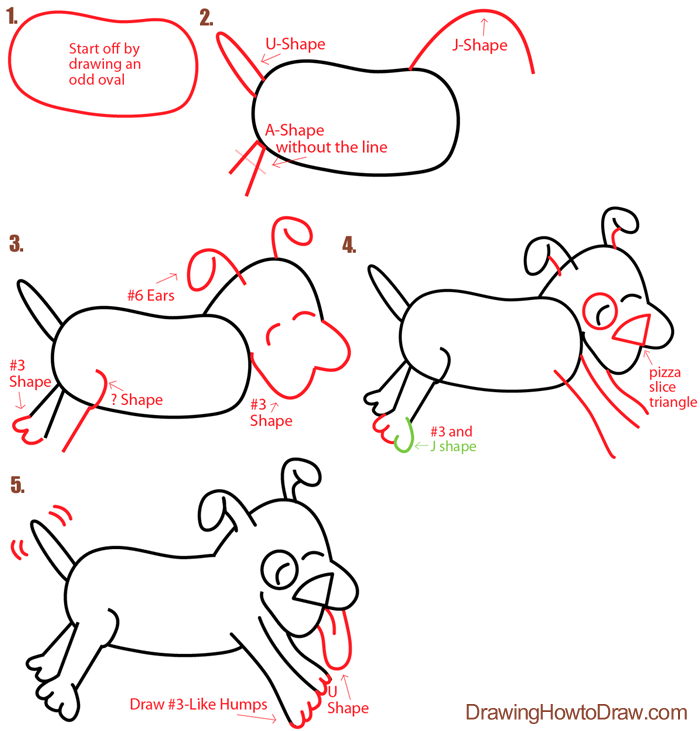 2. Draw a letter ‘U’ shaped tail as well as a capital letter ‘A’ for the back legs (without the middle line). Draw a curved line for the head.

4. Draw a #3 and ‘J’ shape for the back foot. Draw a pizza slice triangle for the nose and a circle around the eye.

6. Erase any lines that are no longer needed.

How to Draw The Triangle Doggy 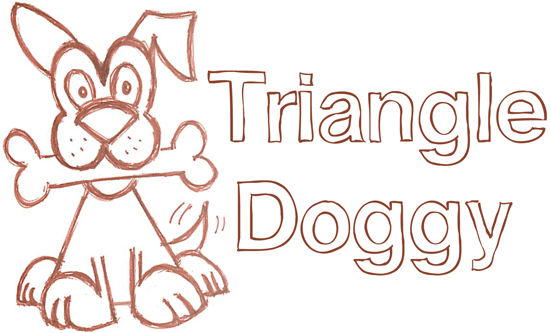 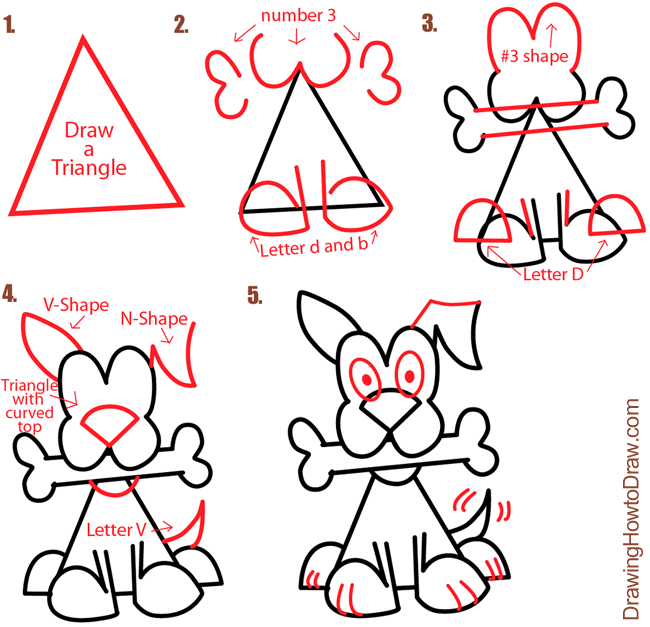 Do you want to learn how to draw a cartoon dog with a bone in his mouth…then look no further:

3. Draw a few lines as well as letter ‘D’ shapes for the back legs. Also draw a #3 shape for the top of the head.

5. Draw 2 ovals for each eye. Draw a bunch of curved lines to finish off the dog.

6. Erase any lines that you don’t need any more.

How to Draw the #3 Legged Puppy

Do you want to learn how to draw this cutesy puppy with simple step by step instructions…look no further than the instructions below:

2. Draw a curved line for each ear and a number ‘3’ shape for each leg.

3. Draw another curved line to finish off each ear. Draw a letter ‘V’ shaped tail and a pi shape. Draw a ‘U’ shaped tongue as well.

4. Erase any lines that are no longer needed.

Now you know how to draw some basic-shaped cartoon dogs. Here are More Cartoon Dog Lessons to Take a Look At. Now it is time to mix and match what you have learned and make up your own pig creations. Post your dog and puppy drawings – we would love to see them. Make them funny by adding funny captions. Have fun!!!