Learn how to see the whites, grays, and blacks in your drawings so you can form 3-dimensional objects. Drawing the light and shadows in forms and objects is a hard thing to learn, but hopefully this tutorial will give you some methods and techniques to use in your future drawings. This is a blurb from the book Successul Drawing by Andrew Loomis, check it out on Amazon. 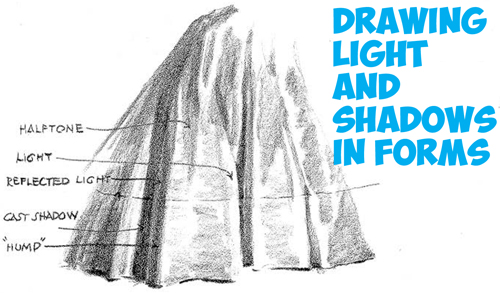 How to Shade and Add Light to Complex Forms, Shapes and Objects : Drawing Tutorial

To the non-artist, the rendering of form with light on it seems little short of miraculous. He is likely to talk about your great talent and how lucky you are to have been born with it. The truth is that he is unable to distinguish talent from plain observation and knowledge of how light works on form, though he has learned to recognize and accept the proper effect. When we point out that an indentation causes halftone and shadow, he may shake his head. But let there be the slightest dent in a fender after she used the car, and he will see it as a dent as far as he can see. Any disturbance of a smooth tone is either a smudge of foreign material or a c change of some sort in the character of the surface. How quickly a spot on the wall or a fabric is evident! The same sort of thing happens in a drawing. 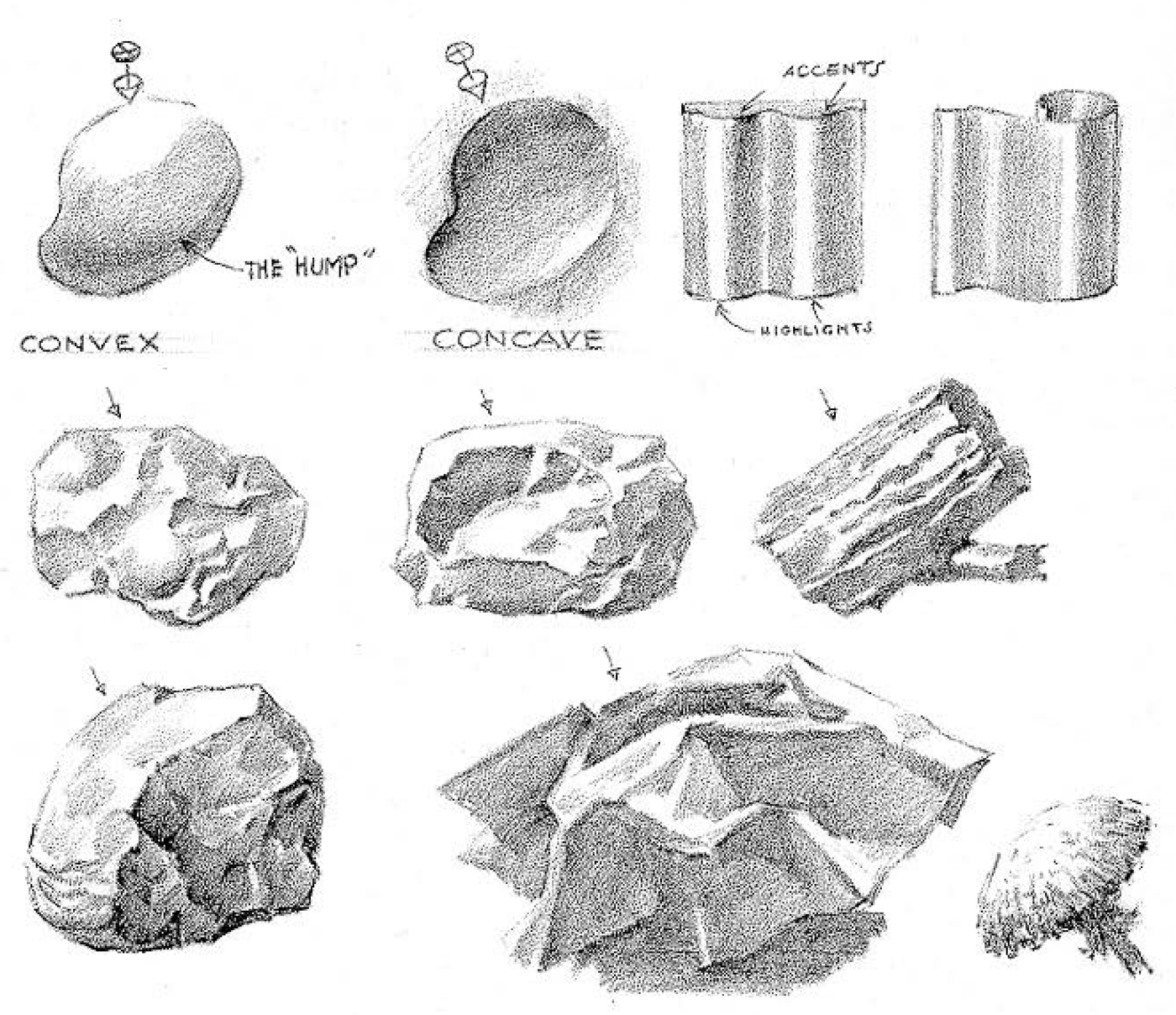 If we put in a tone of dark where it should not be, the effect is that of a smudge. A light where it docs not belong is just as evident. It seems strange to me that some art students will not draw objects as they really look, for they can see the difference between lights and darks as well as anyone else can. The chances are that they are not even looking for tho effects of lights, grays, and darks; they must simply feel that they have to fill the space inside the outlines with strokes of some sort. They have seen that drawings are full of strokes, so strokes are their real concern, without much thought of what the strokes are supposed to be accomplishing or representing. The whites on the subjects have no strokes, since we are really leaving the whites as white. The grays have delicate strokes to leave a gray where we see it as gray; and then the darks are put in with gusto and pressure to set off the grays and whites.

The darks and accents really make the drawing, because they are most easily seen. They carry the punch. Any drawing can be reduced to a rendering of halftones and darks only, since the whites are already present in the white of the paper. So the practice of good drawing, beyond outline construction or contour, is first looking for the areas of light, then seeing the halftones and darks which surround them. Drawing is really difficult only to those who do not know what to look for. The placement of contours is measurement and nothing else. To find the planes of an object is to watch the angle of the surface form as it changes, and then to record the tone or value used by that change or angle.

Alter awhile you learn to recognize characteristic effects, and they become much easier to set down. The student should start by setting up a subject in a good light and studying the effects. Begin with things that are simple in form and not too complicated in texture. Take a piece of broken stone and try to drop it. Take some dishes or pottery, a ball, or a box, or any simple object, and draw for the effects of lights, grays, and darks. Later, try something that has drapery even the youngster’s doll. Or ump a piece of material over something and try to draw the folds. Crumpled paper is the best example of planes in light, halftone, and shadow.

Outlines should not be dark and heavy all around, but light where the inside tone is light and dark where the darks are. In fact, in some of the best drawings we are not conscious of outlines at all, the stress being laid on the tones and shapes inside the outlines. Almost every light area has a definite shape, then the halftones have shapes, and finally the darks have shapes. They must be fitted together. Some shapes have defined edges, others have soft edges. 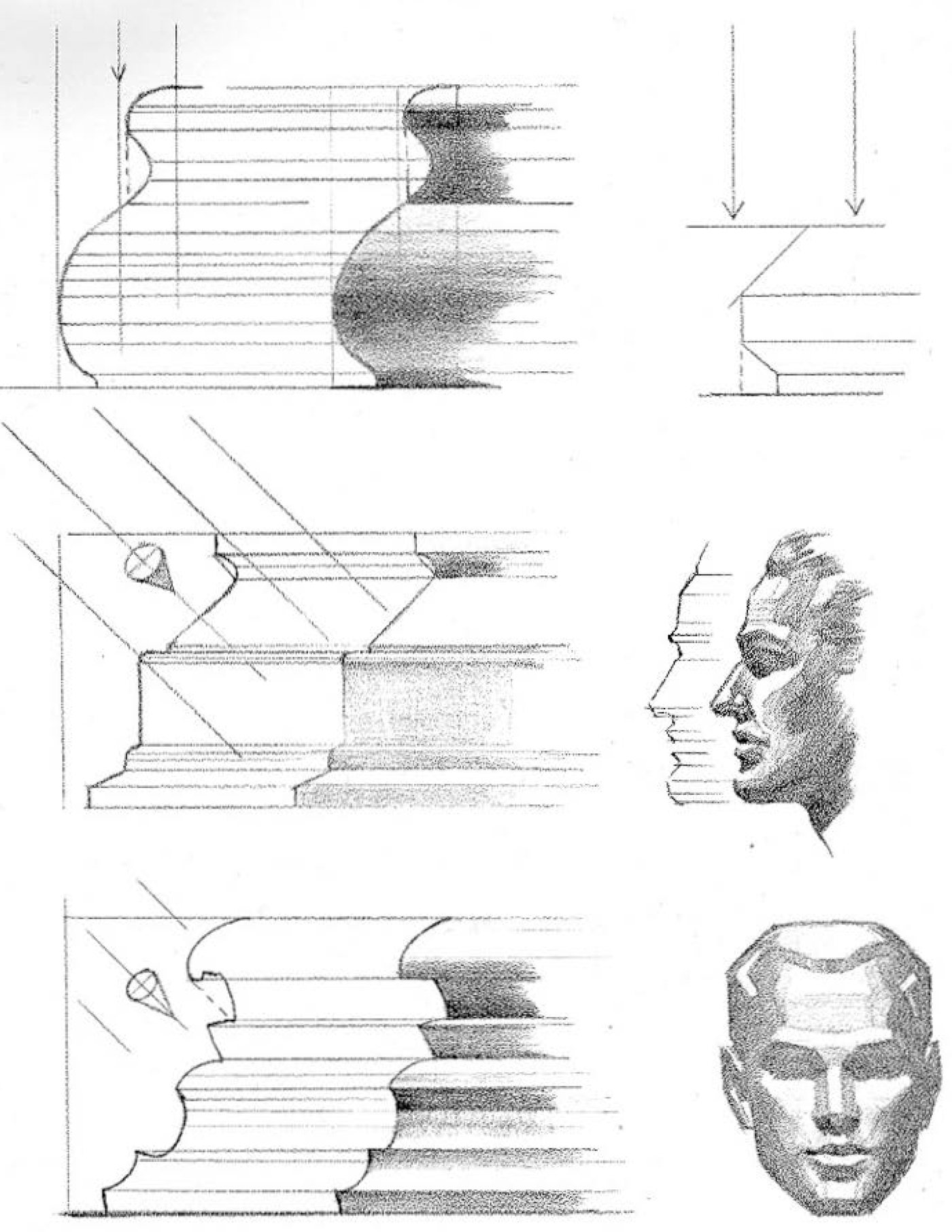 Careful study of this page will reveal the fact that any type of surface form can be rendered by duplicating the effect of light and shadow as they occur across that form. Every material or surface has a characteristic effect at any given moment. Every effect is made up of light, halftone, and shadow. If we study the subject and can define those elements clearly and can then can fit them properly within the contours, we will have

re-created the form and also the effect of the material of which it is composed. In the drawings above, arrows indicate the direction of the light. Set up a number of subjects composed of a variety of materials and render the effects. 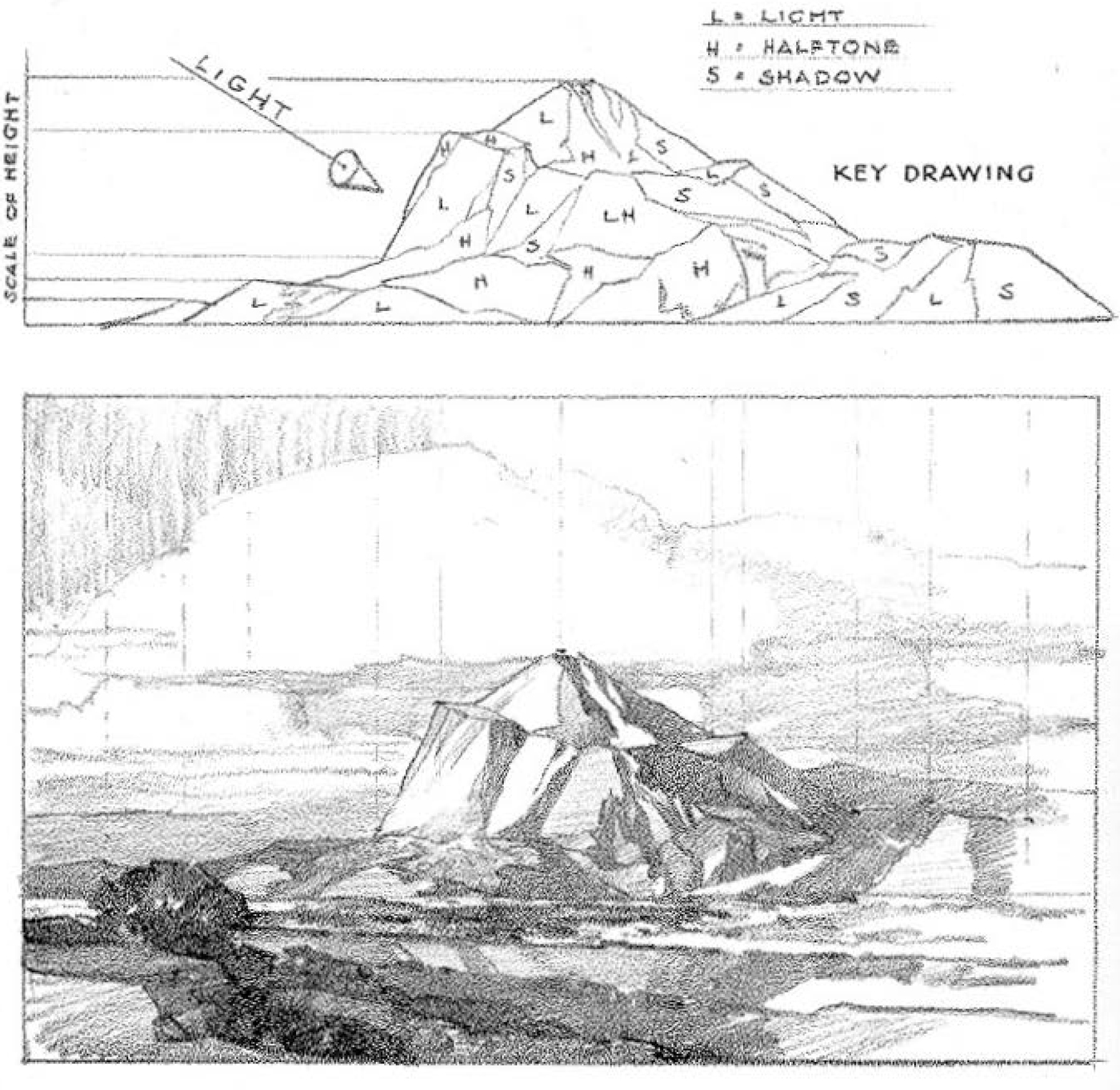 A subject like the one shown above cannot be drawn or painted convincingly without a study of the light on its planes. The camera can give only the intricate superficial effects. We must always search for the broader planes upon which this confusing detail lies. Since light changes so rapidly, it is often practical to make a quick key drawing like the one above, to record the main planes of light, halftone, and shadow. This gives a basis for building the solid effects later. 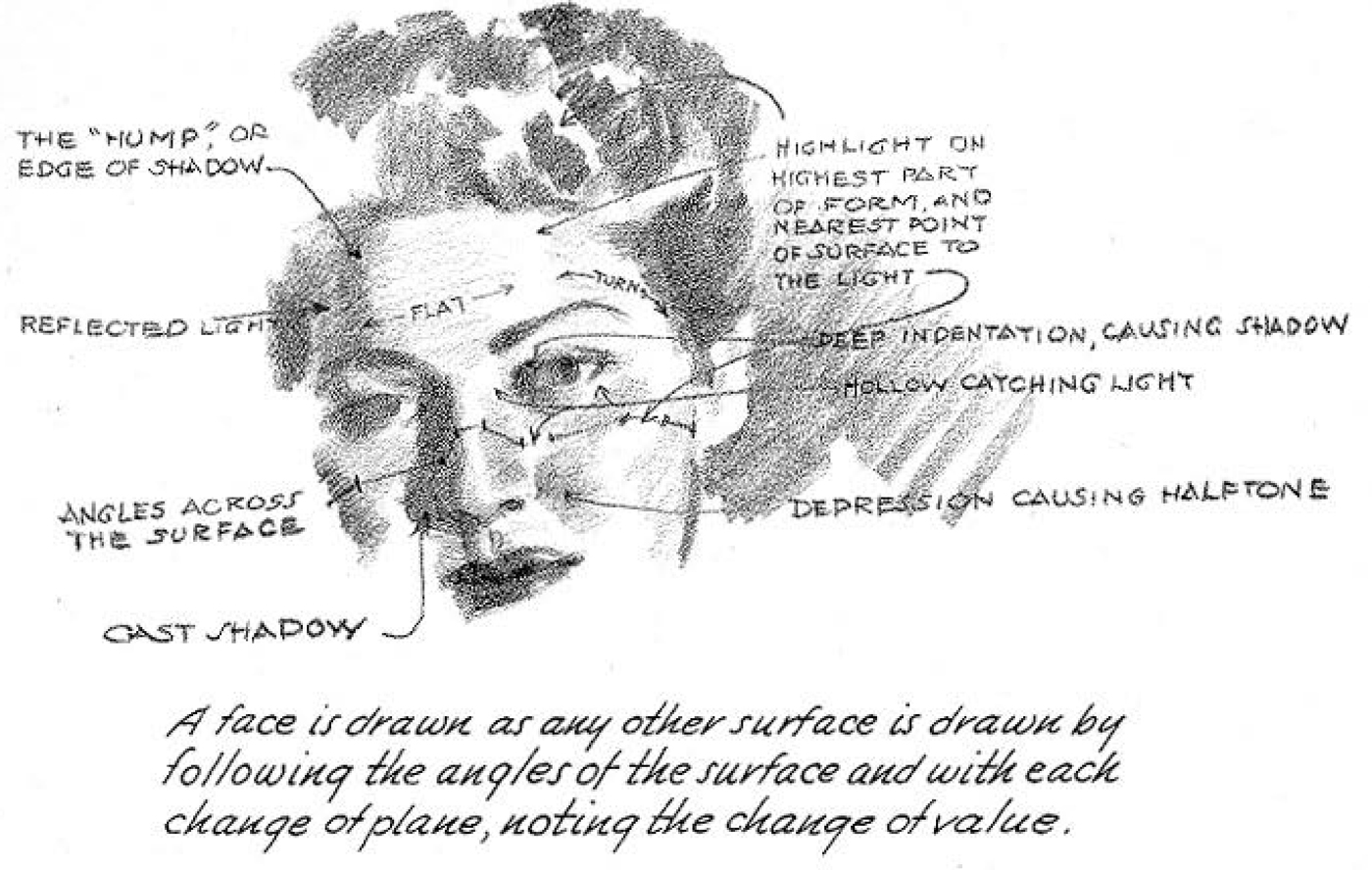 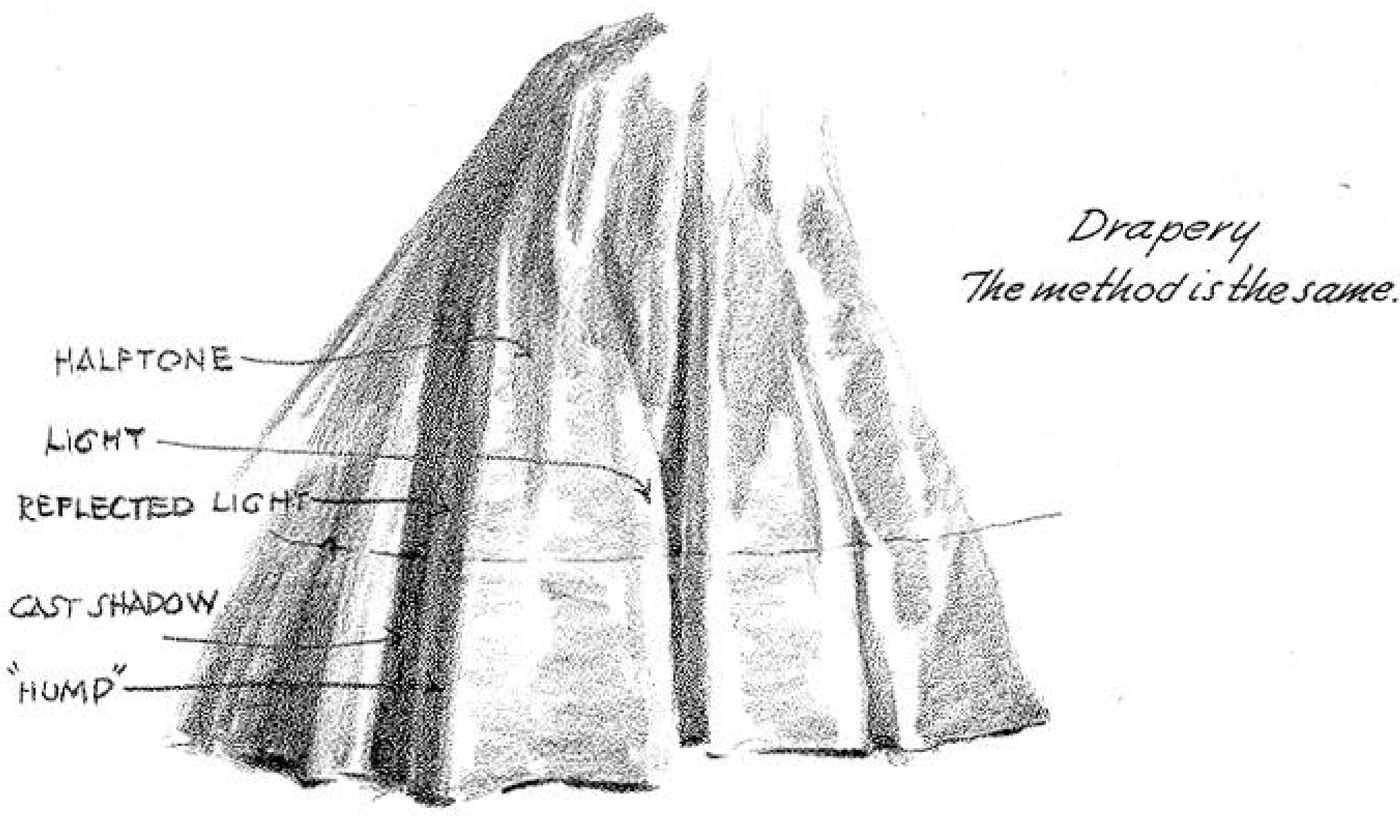 The same methods are also used on drapery. 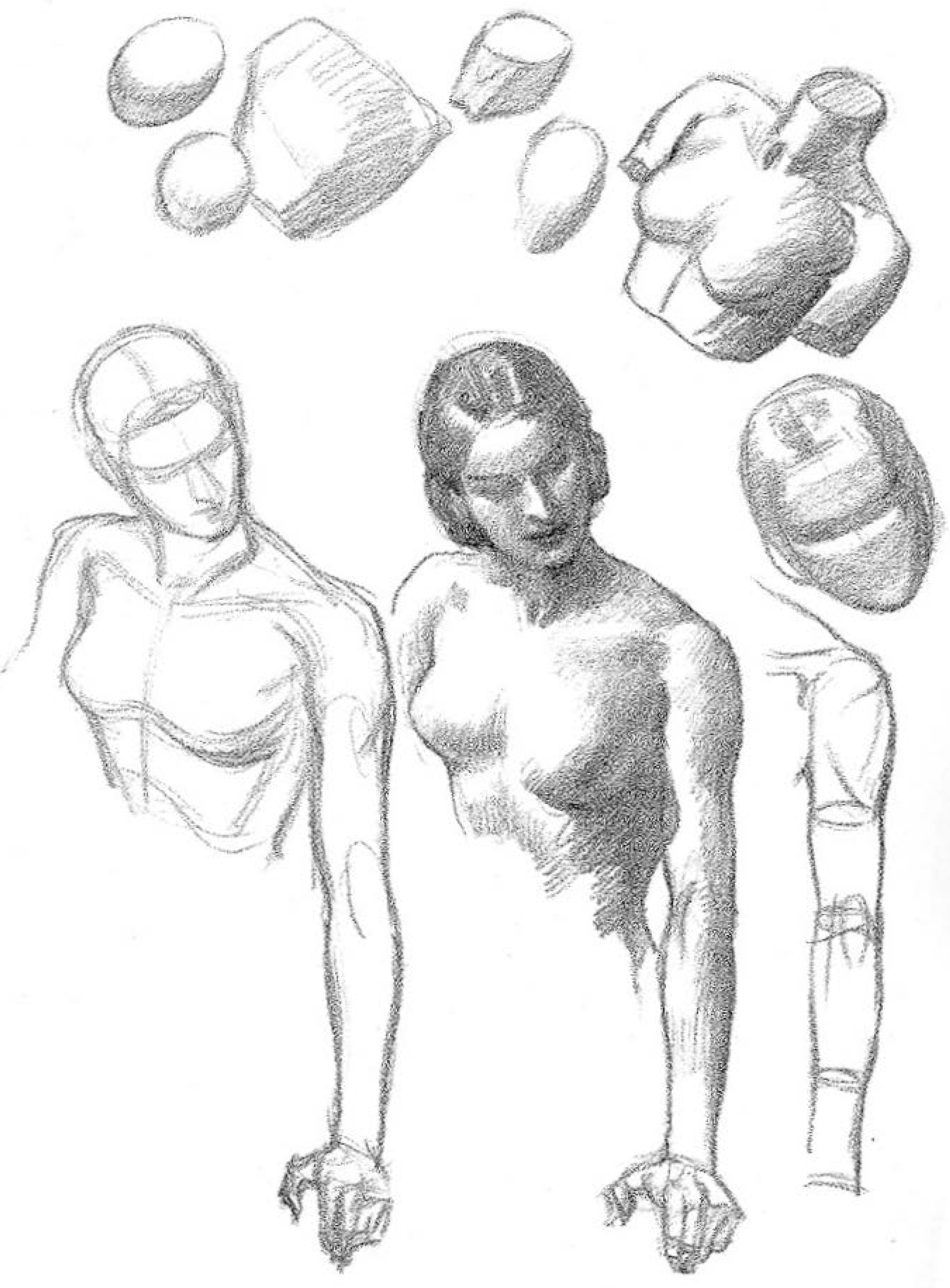 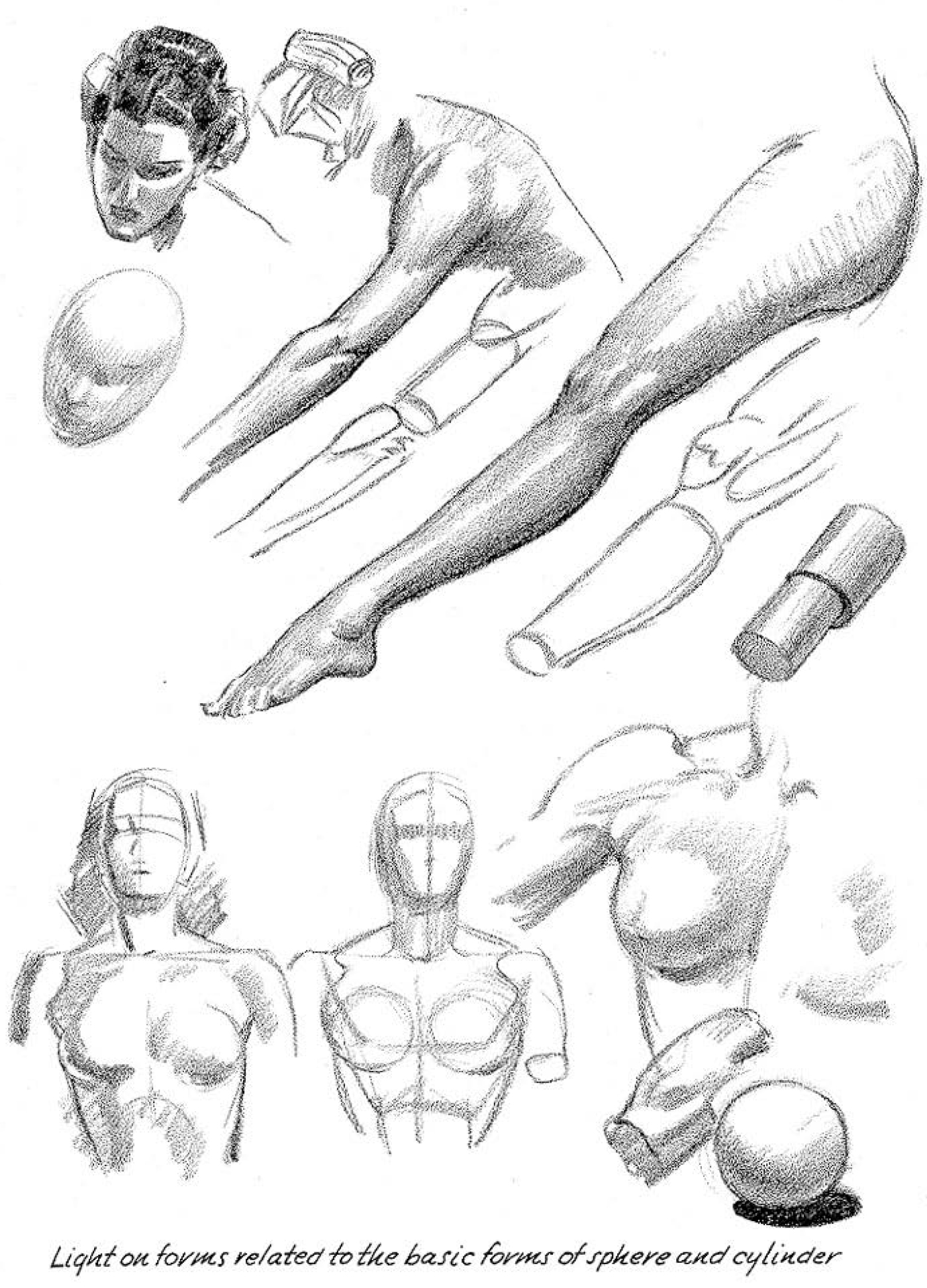 And the same methods are also used on the human form. The form of the body is made up of cylinders and spheres…so Light and shade methods used to shade spheres and cylinders should be used. 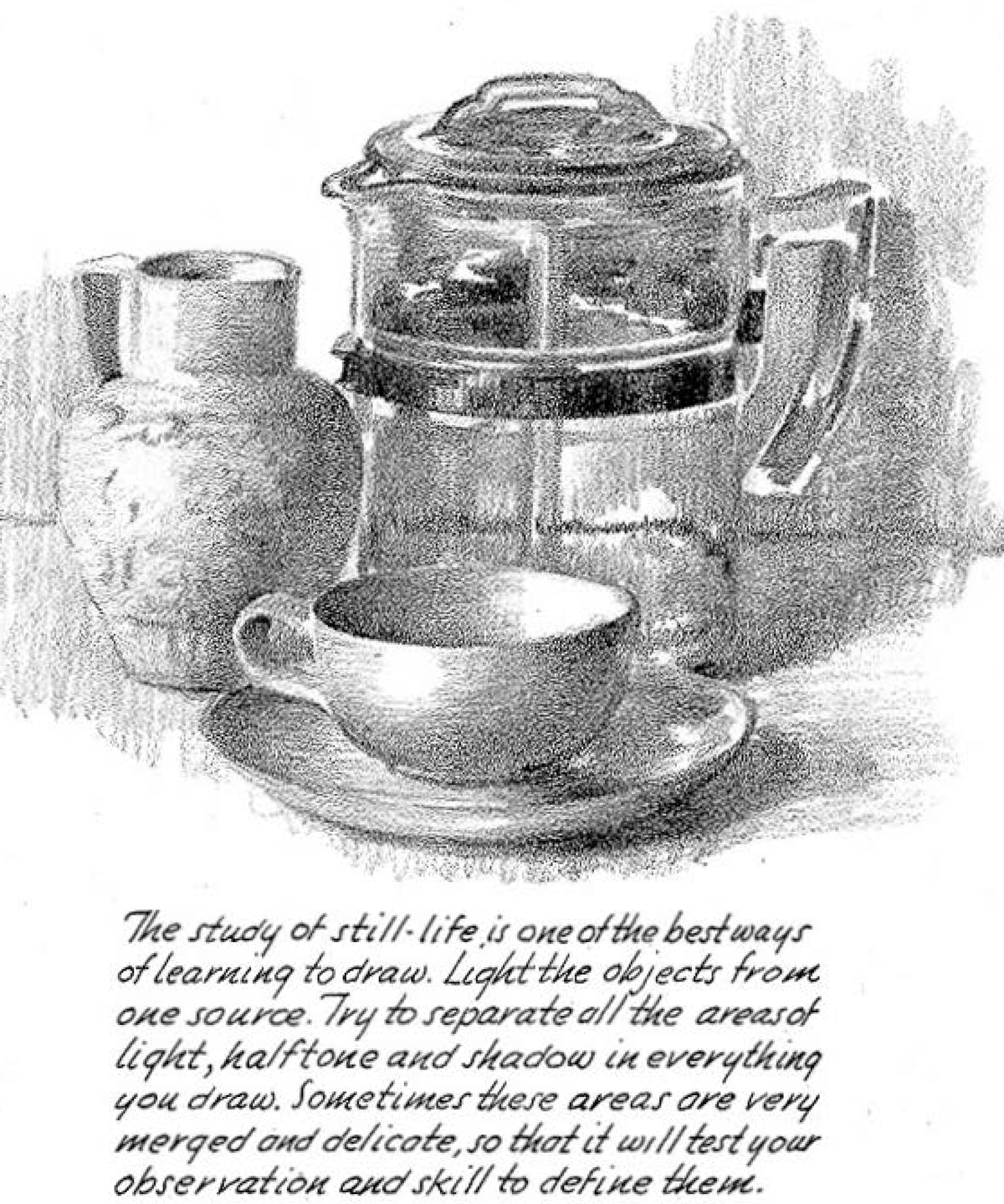 The study of still-life is one of the best ways of learning how to draw. Light the object from one source. Try to separate all the areas of light, halftone and show in everything you draw. Sometimes these areas are very merged and delicate, so that it will test your observations and skill to define them.

This is a blurb from the book Successul Drawing by Andrew Loomis, check it out on Amazon.