Learn how to draw Toola-Roola from My Little Pony Friendship is Magic. Toola-Roola is not a main character on the show, however she IS a pony that is always in motion doing cartwheels or other excited poses. She has a paintbrush for a cutie mark. Learn how to draw her today! 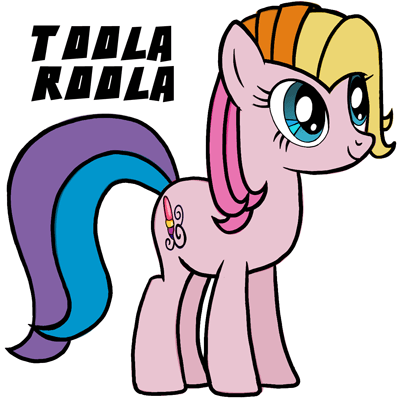 Here are the Step to Drawing Toola-Roola

(Step 1) Draw an oval. Draw guidelines thru its center.

(Step 2) Draw an oval for the left eye. Draw a letter ‘S’ for the right eye and snout.

(Step 3) Draw ovals in the eyes. Draw moon-shapes for nostril and mouth. Draw a letter ‘v’-like shape for the left ear.

(Step 7) Draw a letter ‘S’ shape for the tail. Draw rectangles for the legs. Continue adding to the cutie mark. Draw 2 curved lines and a letter ‘v’ shape.

(Step 9) Draw letter ‘c’ shapes to the cutie mark. Draw a curved line to bottom of the tail.