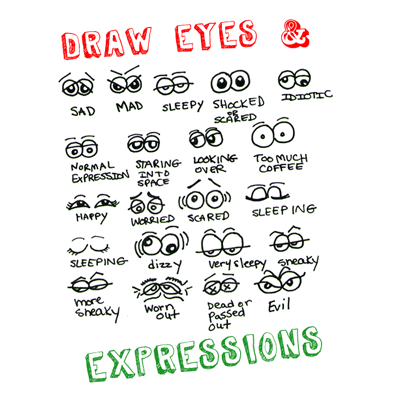 Eyes are the most expressive part of the face and if you don’t believe me, try making facial expressions in the mirror without moving your eyes and eyebrows. This is practically impossible. Today I will list out what cartoon characters’ facial expressions look like.

Did you ever try to think about what people’s eyes look like when they are in different types of moods, without looking at pictures or actual people? It is actually pretty hard. I did this tutorial as an assignment to myself. I was in the doctors office with my sketch pad and wrote down about 20 facial expressions (just the eyes)  that I wanted to figure out how to draw (WITHOUT LOOKING AT PEOPLE OR PICTURES). I then got to drawing. It was much more difficult than I would have thought. I normally look at an actual photograph or a person when I am drawing, so drawing eye expressions completely out of my head was a bit hard for me. But it landed up being a lot of fun and I learned a lot. If you have time, I would suggest that you take this assignment and do it too. You will learn a LOT about drawing.

On the other hand, I do want to teach you what I learned and I think the best way to do that is to just list the eyes and their expressions below. So I did so and I hope that you print it out and use it for reference for when you are cartooning characters.

You Might Also Like the Next Article in the Series : How to Draw Cartoon Facial Expressions and Emotions Tutorials

Example of Eyes with just a normal expression

Cartoon Evil Eyes – These eyes are up to something

Woh, this cartoon character just got off of a ferris wheel or roller coaster – he is seriously dizzy

Watch out for the idiot cartoon character – he could just be dizzy too.

This cartoon character is looking over to the right

Ahhhhh, this cartoon character is scared. Maybe he / she is frightened because he / she just saw a ghost.

This cartoon character is shocked or scared about something. He looks like he is a deer caught in car’s headlights.

Another way to draw a sleeping character.

This cartoon character is very sleepy.

This is a sneaky little cartoon character. Notice the raised eyebrow.

A cartoon character in a trance, bored, or staring into space.

This cartoon character has had too much coffee or is just shocked or scared about something.

This guy is very sleepy or just extremely bored.

This is a seriously sneaky little guy…notice the shifty eyes and the highly raised eyebrow.

This guy looks like he has been up all night taking care of a baby or had night shift and just got home…he is seriously worn out.

Oh no. This cartoon character is very worried as you can tell the upside down ‘v’ eyebrows and eyelids.