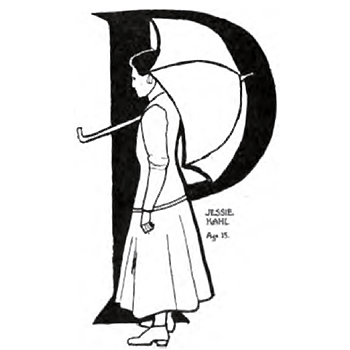 Figure Drawing Made Easy for Kids with Alphabet Letters Technique

Pose Drawing!!! There the three requirements of correct figure drawing and these are : (1) anatomical construction (2)  true proportions (3)  expressive action. These are the three things that need to be emphasized, in fact they are the only things to emphasize.

Many older kids are scared to draw, or even think that they hate to draw because they fear to make a line because it might be wrong. They are painfully sensitive to their own comical mistakes, and “hate drawing” because they have been told by some criminally foolish teacher, or unwise parent, that they “can’t draw.” “And what’s the use wasting time, if I just can’t?”  Figure drawing really freaks out more children than any other type of drawing.  Here the good pupil shines out in glory, and the poor one covers himself with confusion and shame. UNTIL NOW! With the following methods, children have been known to draw better than they have ever drawn…so read on.

“Direction of line”—but of which line? His bewildered eye refuses to inform him which is the one great and important line amid the multitudinous folds and curves of the draped body.

“Bony construction of the body”—he has seen a skeleton; maybe he has even sketched one; but the present model is only posing an hour, and his skeleton is well padded with flesh, and amply clothed, to boot; the student’s paralyzed brain refuses to present him with a vision of that once drawn skeleton, and he lacks X-ray eyes to see it before him.

“Proportions”—they are the easiest to really see and measure, but even they are so subtle, and a difference—such a tiny difference—an eighth of an inch—turns a presentable nose into a nightmare vision. So, having made half a dozen fearful or funny, utterly inhuman attempts, and been laughed at once or twice, he gives up in black despair. Sketching he cannot and will not do. And yet, just because it does require, and produce, a true eye, a quick brain, and a responsive hand, it is, perhaps, the most important and interesting part of the work. 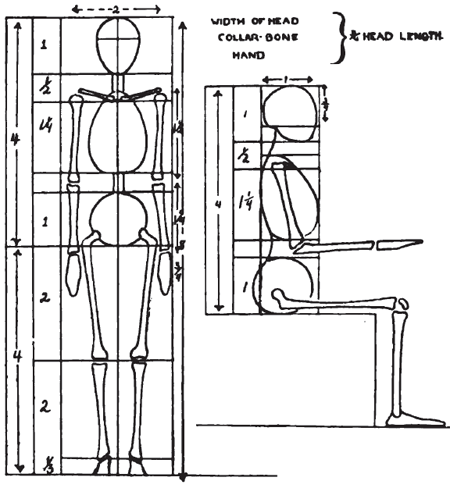 Above you will see a simplified human skeleton that has “Greek Proportions” that are easy enough to remember. Study the proportions of print it out to keep beside you because it will make your life so much easier when trying to draw figures / people.  This skeleton REALLY, REALLY HELPS…so please take this seriously if you want to learn how to draw people. The children all say he helps mightily  and they use him when they are drawing other children & people. 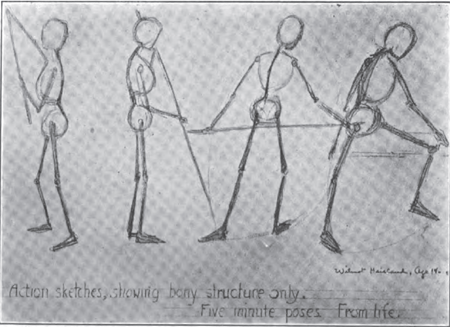 Even though the easy skeleton (above) helps children draw figures better, nothing has been known to help children more than alphabet letters. Why? Well drawing letters has been drilled into their brains since they were young children. Children can draw letters with their eyes closed, and maybe even while they are sleeping. The proportions of letters are ingrained in their brains and psyches. When you ask children to draw people in the shapes of letters, they get excited. They know that they can draw letters, so their confidence increases. Above you can see the results, taken largely from the work of freshman classes, and many of them the child’s first attempt with the ink and brush (which I think is simply amazing). Check out the proportions…they looks spot on to me.

When you try to draw these alphabet letters people – use the skeleton above so that you remember what proportions arms and legs are in relation to the head and other body parts. You will see what the results are and you will be amazed.

Drawing people in the poses of Alphabet letters sounds very much like a game…but since it works, why not mention why it works so well… First, it helps astonishingly, in many cases, with proportions. The child, looking at the model, sees the letter, rather than a human being, and, in that simplified form, the big proportions present themselves to him in a much less bewildering and complicated form. Second, in such letters as the R and the S, it helps with the action; gives, unconsciously, the key to the great “direction of line” of the figure. Unquestionably it gives the “big form,” in a simple and easily understood manner. Last, and most important, it suddenly illuminates, for the student, the meaning of “simplicity,” and one of the reasons for it. If they are sketching Edith, for instance, why isn’t it of vital importance to put in the things that pertain to Edith—the obvious facts that she has eyes, nose, and mouth; that her hair is curled, or straight; that her sleeve has an anchor embroidered on it, her skirt is pleated just so, and her shoes are buttoned? To the mind of the 13-year-old, these are facts of much importance. They impress themselves upon him much more forcibly than does the exact size of the head in relation to the body, or the articulation of arm and hand, or the length of the foot. The child sees that embroidered anchor and the buttoned boots definitely and clearly, and, even after he has measured six times, and looked an hour, he is still a bit uncertain as to the anatomy and proportions. So, if he is sketching “Edith,” he puts in those things that, for him, identify “Edith.” Matters are different, tho, if he is sketching an initial letter. He is at once apt to leaving out many of those “dear details.” He feels that the grace of the big lines, the relation of the parts, and the omission of all detail are necessary from a decorative standpoint, and doubly so, if it is his intention to some day use the initial, much reduced. 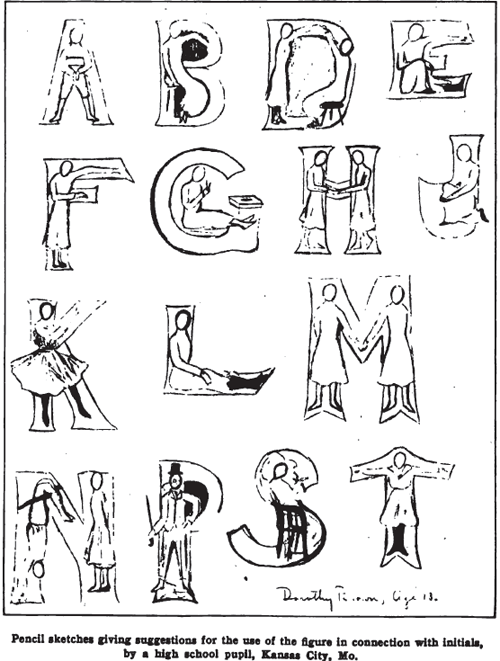 Nearly every letter may be posed and drawn. The page of small letters was made by a i3-year-old girl. Pretty good, isn’t it? I am impressed. This girl became so interested in drawing all of the letters that she became very inventive with some of the letter people poses. While some of the letters can not be posed, I bet you, at home, reading this, can come up with some pretty creative people letters. For the N, for instance, maybe a boy, sitting on the ground, with a squirrel perched on his knee for a nature study! If you do decide to try this figure alphabets poses activity, please send in your work because I would love to see them and post them here.