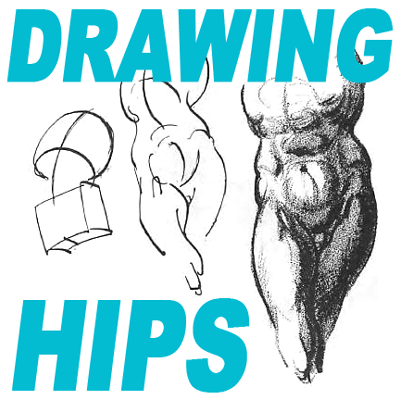 HOW TO DRAW FEMALE AND MALE HIPS DRAWING GUIDE

Because of the unusual shape of the hips, a simple concept must be conceived. Like the head it is square in concept and is tilted forward. It has six planes, front, back, two side top where the cage is attached and bottom where the legs come from. The hips consist of three major bones. The Pubis, the Illium in front and the Ischium behind. The  lower end of the spinal column is wedged in between both blades at the Sacrum. The hips can bend with the cage or twist opposite the cage in many positions because of the spaces in the vertebra. The large muscle, External oblique, comes from the lower eight ribs to the lilac crest and a ligament branches from it to the pubis. The Gluteus medius comes from the outer surface of the Illium, covering the great trochanter and to the side of the femur.