Ahoy Matey!!! Today I will show you how to draw a cartoon sailor with rosy cheeks, a striped shirt, a navy hat, and smoking a pipe. This drawing tutorial will guide you through easy steps to drawing a cartoon man sailor. Have fun. 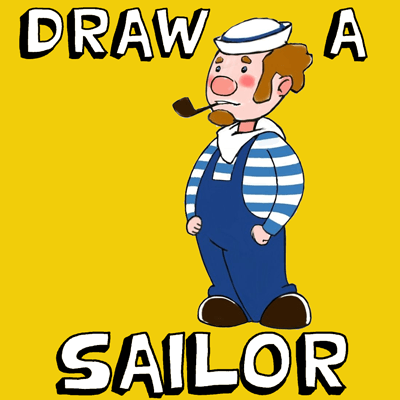 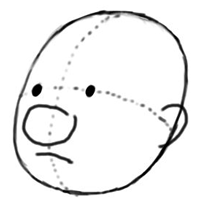 Step 1)  draw an oval shape and define a vertical line for nose (“nose-line”) and a horizontal line for eyes (“eyes-line”).  On the eyes-line draw the eyes, make sure that the eyes are placed on the same distance from the vertical “nose-line” then,  on the “nose-line” draw a mouth and a nose.

Step 2)  draw eye-brows, hair and beard, finish the shapes of the mouth and the ear. Erase the “nose-line” and the “eyes-line”. Now, we got the sailors head drawn! Now, draw a vertical bow shaped curve coming out from the neck. And then draw a horizontal line for feet.

Step 3) Draw the body in a shape of an oval, then draw arms. Draw “8”-like shape for shoes.

Step 4) Now draw the legs, just add two lines joining the body and the shoes! Draw the sailor’s scarf and hat. (Notice the shapes that make the hat and where they cross the sailor’s head) Then you may experiment with his smoking pipe – draw a flower or a cigar instead if you wish! 🙂

Step 5) Continue with the sailor’s hat and then erase all those lines we don’t need any more. Then draw galluses for his trousers.

Step 7) Don’t forget to clean up you drawing! It should look neat 🙂

Step 8) The line drawing is finished and ready for coloring!  🙂