Here is some background information about the face, its measurements and proportions. This is important to know to draw the head correctly. This article also goes over how to draw the facial expressions and emotions. 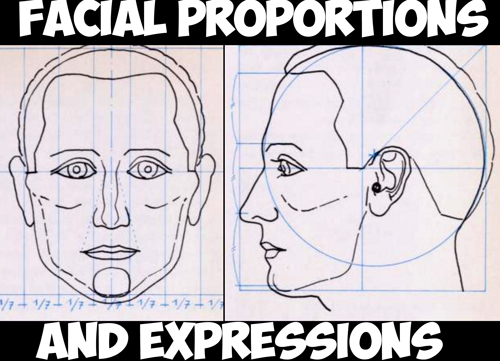 The shape of the head is determined first of all by the structure of the bones of the cranium. They can also indicate racial origins. The overage shape of the long skull is enclosed frontally in a rectangle. Its height is an eighth of the whole height of the body of a full-grown man. The breadth is two-sevenths smaller than the height. The same head in profile fits into a square with sides corresponding to the height of the frontal rectangle, one-eighth of the total height. The muscles of the head have primarily technical functions; they open and shut the mouth and eyelids; they move the lower jaw for chewing and biting. For blowing, sucking, and speaking the mouth muscles regulate the flow of air.

In the pictures at top : The face devoted vertically into seven.

In the pictures at center: The chin tip and the top of the nose, nose and eyebrows, eyebrows and start of the hair are an equal distance apart. Geometrically speaking, the central point of the skull lies on the diagonal and perpendicular lines, crossing the ear cavity.

In the pictures at bottom: Head seen from above 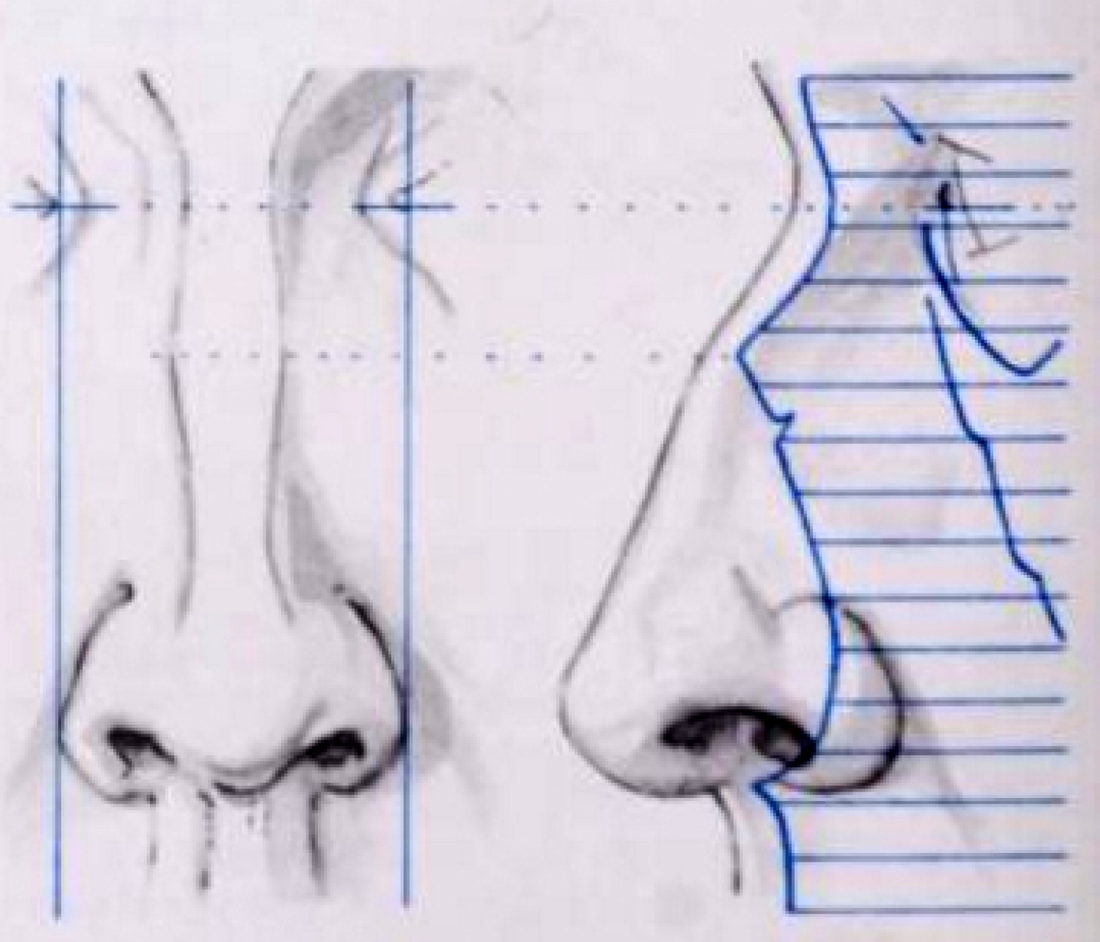 The facial muscles, however, react to mental stimuli also, so much so that even small children and animals can understand clearly the (lasting for only a short time) changes of mood of the person they are with from his face. Laughter, crying, anger, and sadness are (existing (the same) everywhere) understood expressions. They are all facial movements caused by muscular activity,If certain stimuli are repeated often they become more and more impressed into the outlines of the face, mainly by folds and lines in the skin. Constant cheerfulness or anger (over being mistreated), unhappiness, stubbornness, reserve or self-control creole facial expression through the muscles of the face. A person ‘s reaction to facts or conditions (that surround someone),rather than the facts or conditions (that surround someone) themselves, decide/figure out the character of a face. Passing violent moods leave no trace. 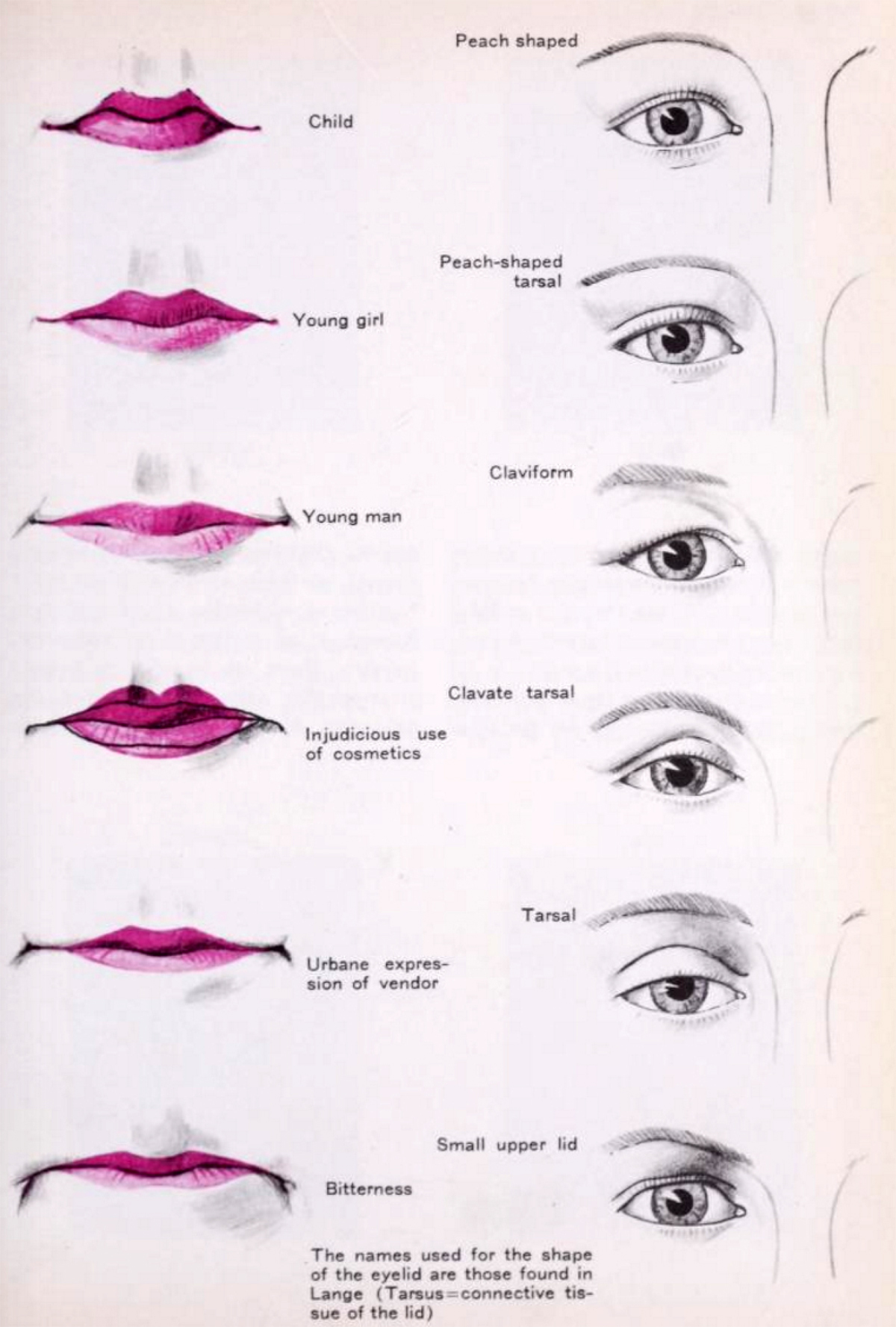 As can be seen in the diagrams, there are few facial muscles, but on (without limits or an end)variety of effects results from their interaction, providing all the changes of expression even as the thirteen notes of the well-reduced scale can combine in every possible way to farm the whole range of musical expression . The laughing muscles, for instance, are also the principal ones used in crying, but the difference is established by the (action that helps a bad situation) of the chin-raising muscle and the muscle in the brow. The eyes, even to the color of the iris, are basically the same in all people, and of practically the some size, but their seen/obvious size is much/a lot changed by the opening of the lids, which in turn is influenced by the (creation and construction/ group of objects) of the upper lid and the cushion of fat surrounding the eyes at the back. Fritz Lange, a professor of (medical care related to bone/joint/muscle problems), has excellent and honorable six basic types of lid (creation and construction/ group of objects), a creation which is of great use in portrait painting. The general tone of a person is often pointed to/showed by the eyelids . The eyes can be made large at will, but if the lids are usually rather dropped it is a sign of weak tone. The upper lid may, of course, relax for a short time/in a short time with any people,but there is a much larger difference in the space between the two inner corners of the eyes.Here again the constitution is as much responsible as the position of the eye sockets in the skull.

Deep-set eyes generally lie close together. The (usual/ commonly and regular/ healthy) distance between the two inner corners of the eyes goes along with/matches up to the width of the visible eyeball. The most important thing in drawing an eye is to establish the position of the one for instance, in moments of strong eyeball from the placing of the iris and and (allowing something to happen without reacting or trying to stop it) sexy/sex-related excitement, listening its pupil.The iris is (not able to be moved) behind the music, or breathing in intense perfumes.

Wide eyes have always been connected with a deep (related to religion or the soul) life, and there is a constant habit/desire to show/represent eyes larger than (usual/ commonly and regular/ healthy) in relation to the rest of the face and body.

The width of the space between the lids does not differ much between in-the eye surface; the eyeball is moved by six muscles. The circular iris has an (all with the same center) circular opening in the middle, the pupil, which can be enlarged and reduced by muscular action to control the amount of light penetrating the eye. 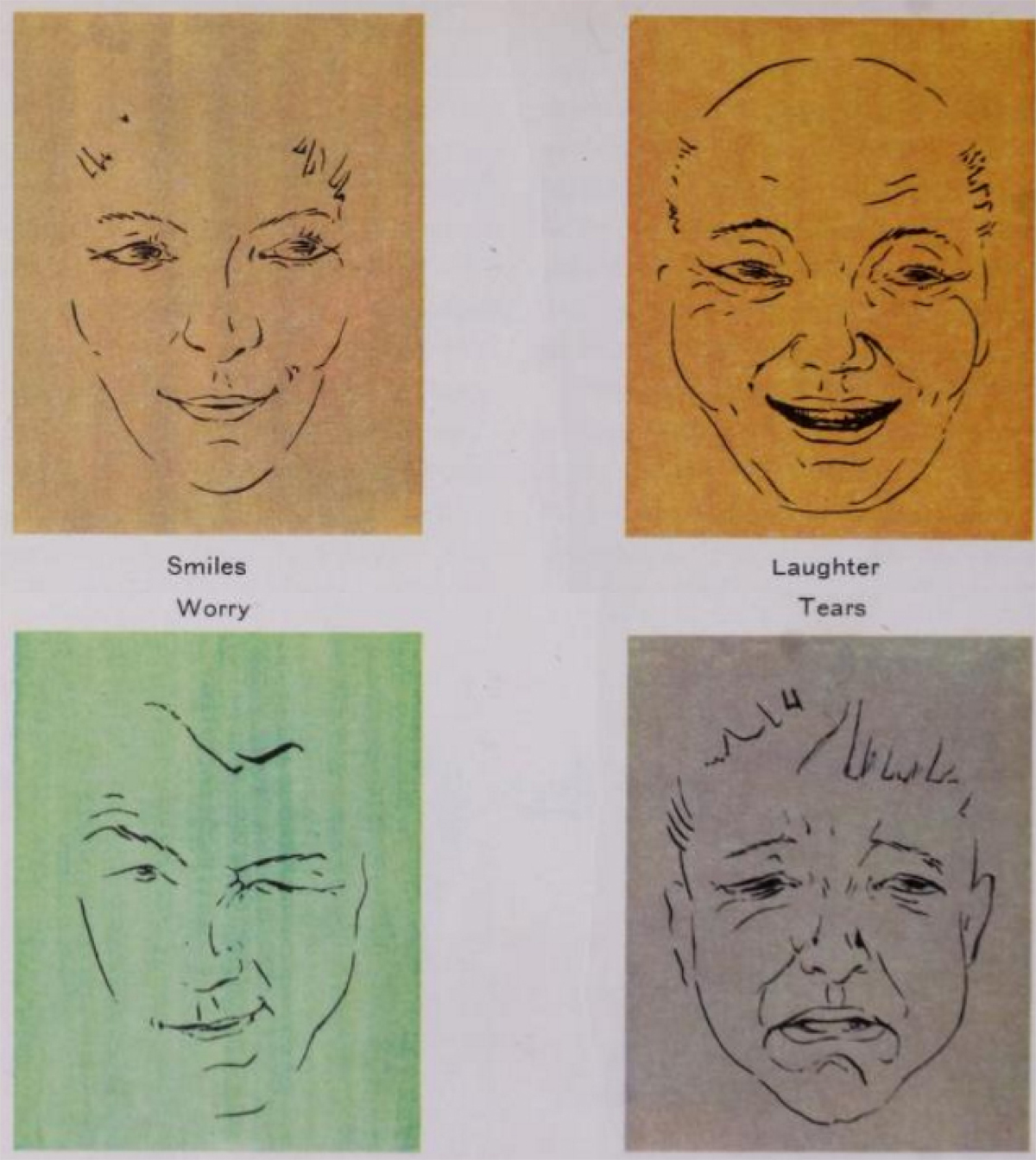 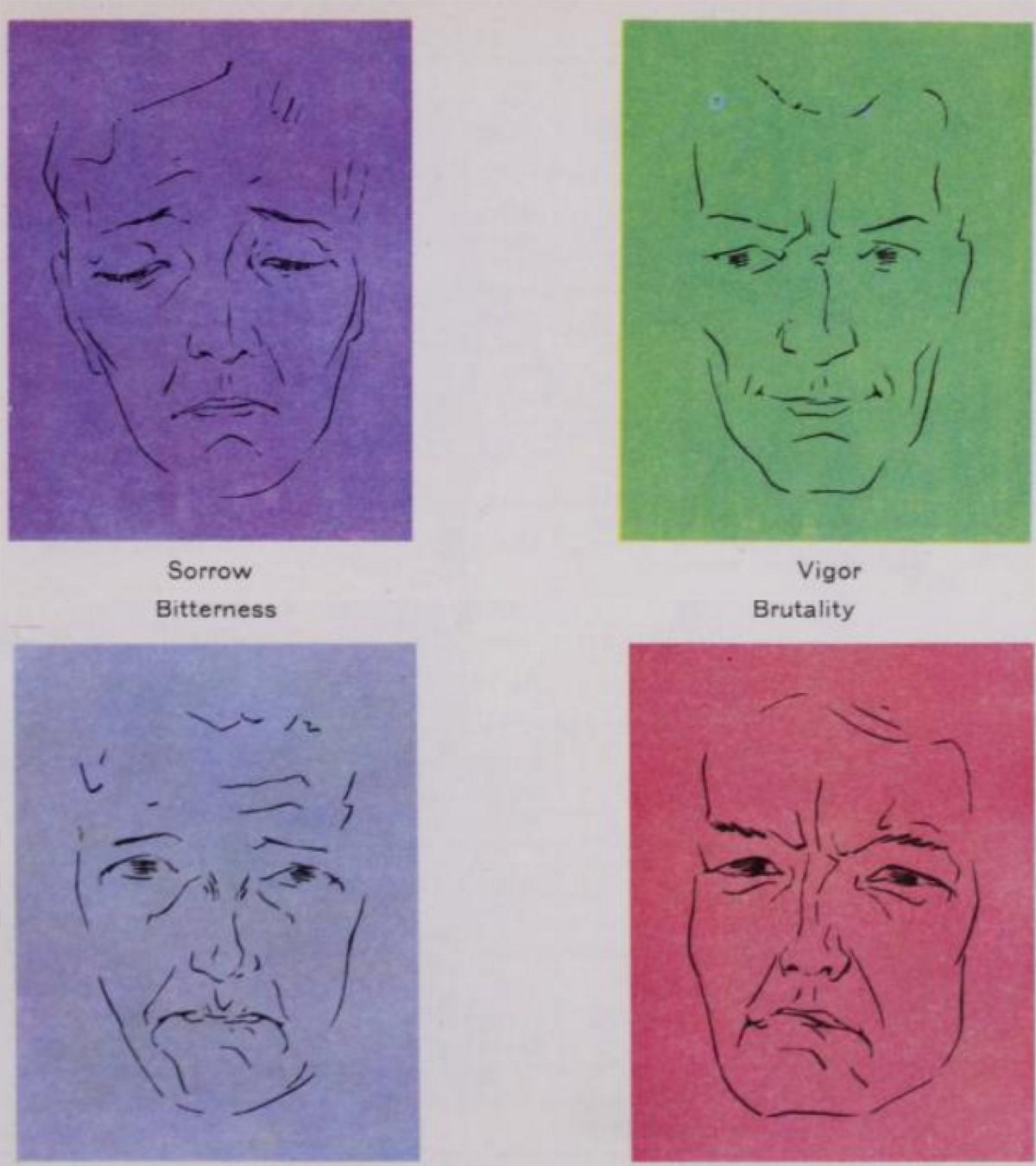 Feeling of love, hate, guilt, etc. as well as light affects the size of the pupil. Depression, anger, and sadness make it larger so that unemotional and factual vision is disturbed by too much/too many penetration of light. Animation reduces the size of the pupil. Focusing is operated by a lens lying behind the iris and moved by a muscle. The changes in it cannot be seen directly; yet it is always possible to know if someone is looking at an object or through it, or seeing in a “intelligent (person)” manner. There are no rules to help in drawing this; close (instance of watching, noticing, or making a statement) is the only way. Shading and highlights, the path of the look of each eye, and their combined direction, which is parallel only when looking into the far distance,are the things to (see/hear/become aware of). The much liked/respected portrait which seems to look at the (person who is seeing or looking) from whichever direction it is viewed is(accomplished or gained with effort) by the trick of making both eyes look straight out of the picture perpendicular to the picture plane. The color of the iris has no connection with character.The permanent expression of the eyes is related to the position of the iris in the eyeball and the position and shape of the lids. The “expression” of the eyes is, in fact, the general facial expression. Tears, or an increase of tear fluid, make the eyes shine more.

The original shape of the mouth is rarely to be found in older people. The movements of the mouth muscles affect the shape of lips and corners from (the time when a person is a child), for the mouth is the first feature to be moved by any change of feeling. In general, outward expressions of personality make the lips turn out, while feelings held in and experience (in an accepting, calm way/without trying to stop or change what’s happening) received make the mouth turn in and become narrower. A typical pointer’s mouth seems to belong to anyone (only for a short time), at least, to anyone who looks, watches/ states/ celebrates/ obeys, and then reacts (in a way that shows good ability to create interesting new things) to what he has seen.Purely willing to listen or curious people, on the other hand, tend to have narrow, pulled-in mouths with regular, downward folds at the corners, the wrinkles of anger. Combinations of facial movement are a fascinating (thing that is suddenly shown or understood) of character, but there is always a harmony of expression even in sad people who ore inwardly lorn. Women’s make-up is possibly going to substitute a mask for this harmony, inventing a new line of brow and widening the lips to make a dishonesty/pretending of great sexiness; for portraits it is important only to let make-up underline the natural forms with color.

The folds of the cheek from nose to mouth corners run in about the some direction as the folds of a pulled down mouth. They may, however, be due to heredity, and are sometimes seen,though not as lines, in children, as quite unrelated to their character. They are caused by smiling and crying and by strain or unhappiness and are only (excellent/very unusual) if they look strange in the total build of the face, showing some passion which is uncontrolled and not blended in in the general character of the person. Lines of unhappiness ore caused by the frequent (shrinking or gathering into folds) of the muscle which lifts the nose. Aggressiveness causes a line to appear in the some way, one which is to be seen on the faces of almost all the great fighters of history. It does not appear on a face where the nose runs into the brow with ou ton inward curve. Active concentration and (always wanting to fight) effort may remind people of/bring out activity of the frowning muscle, pulling the inner ends of the brows downwards and inwards and forming the (what people commonly call a/not really a) lines of thought. The middle part of the forehead muscle works against this frowning muscle, raising the inner ends of the eyebrows to give the expression of sad/causing pity and sadness pain. This movement of the brows is rarely accidental/not by choice, it has to be approached and studied and is a powerful means of expression for the actor.

A wrinkling of the whole brow, making up-and-down folds, is a natural movement and leaves its mark on all older faces, but it does not suggest very much, for only someone who as controlled to the point of impassibility has none. Every (allowing something to happen without reacting or trying to stop it) effort uses it, extreme surprise, reflection. Attention, and offensive snobbiness,too. The forehead muscles can replace those that lift the eyelids a little bit, if these are weak or do not function. So, folds on the brow have to be studied along with other expressions to be correctly understood.