Today I will show you how to draw the animated version of Giselle and Prince Edward from Disney’s Enchanted movie. Giselle is the beautiful red-headed girl who gets thrown into the real-world city…and Prince Edward is the prince who ‘loves’ her and wants to save her and bring her back home. I will guide you thru the process of drawing them with simple-to-follow step by step instructions. Have Fun! 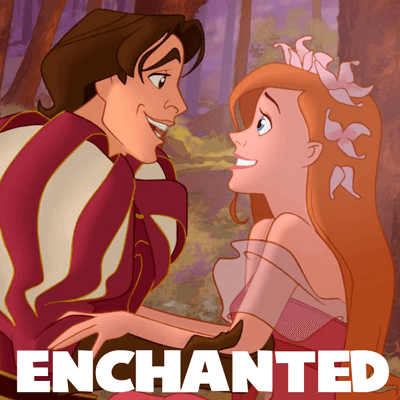 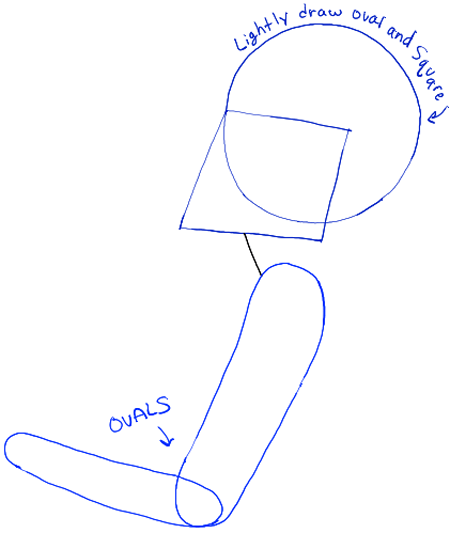 – Lets start off by drawing Giselle’s form. Draw the head’s form lightly with a circle and a square. Draw a line for the neck and the lightly draw ovals for the arms. 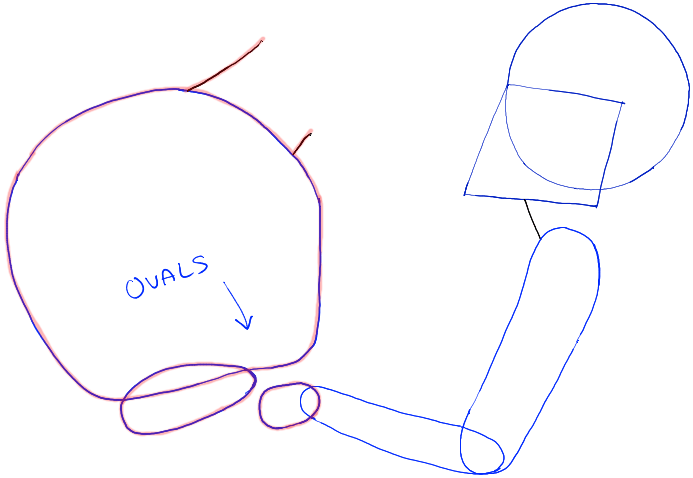 – Lightly draw an oval form for her hand.

– Then draw oval forms for Prince Edward’s arm and shoulder. Draw lines for the neck. 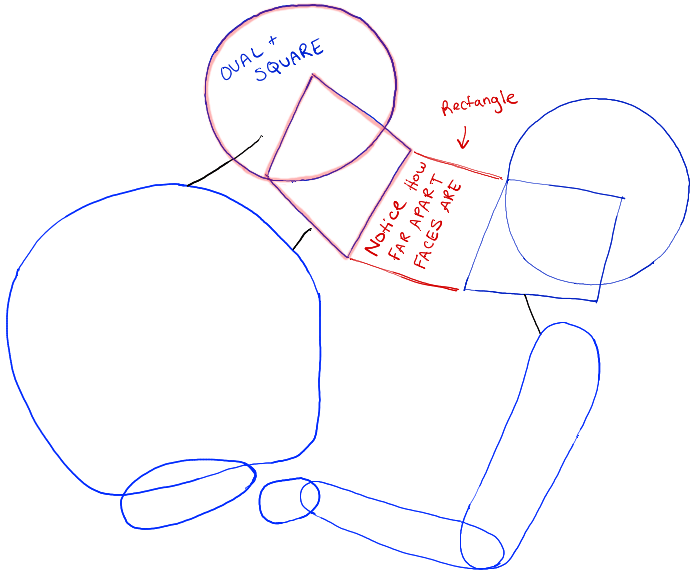 – Lightly draw the basic forms of the face with a circle and a square. Make sure that the faces are the right amount apart. 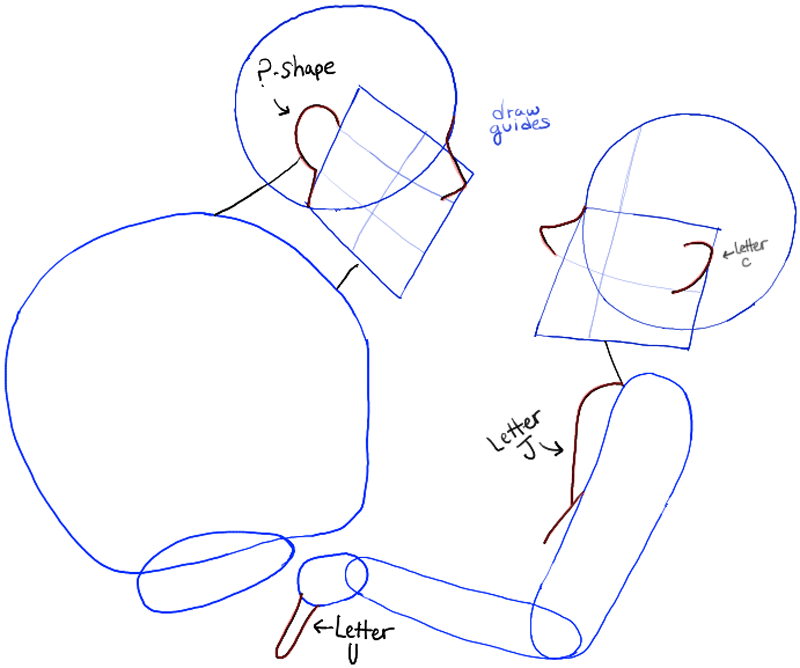 – Draw a ?-like shape for Edward’s ear and draw his nose.

– Draw Giselle’s nose and her ear (a letter ‘C’ shape). Draw an upside down letter ‘J’ shape in her chest area. Draw a letter ‘U’ shape for her finger. 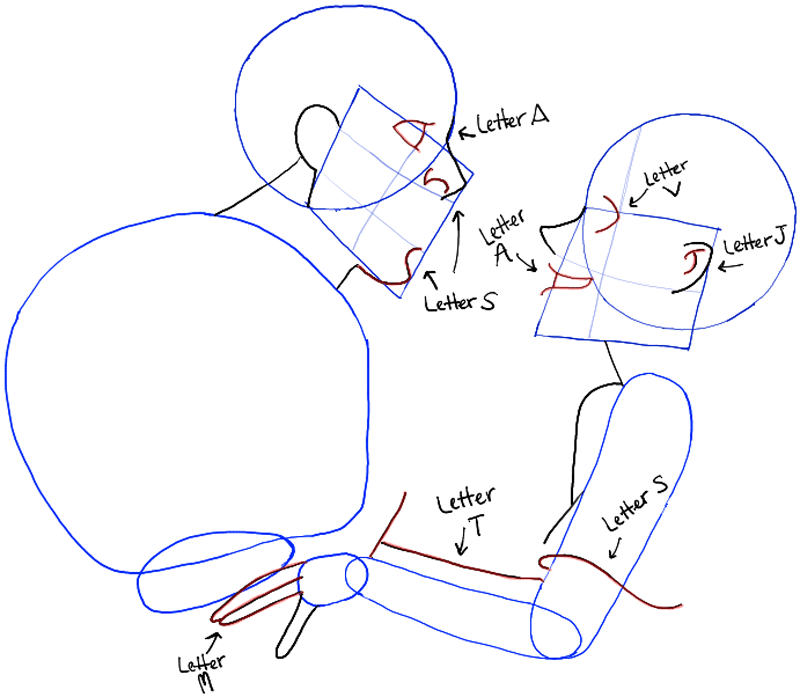 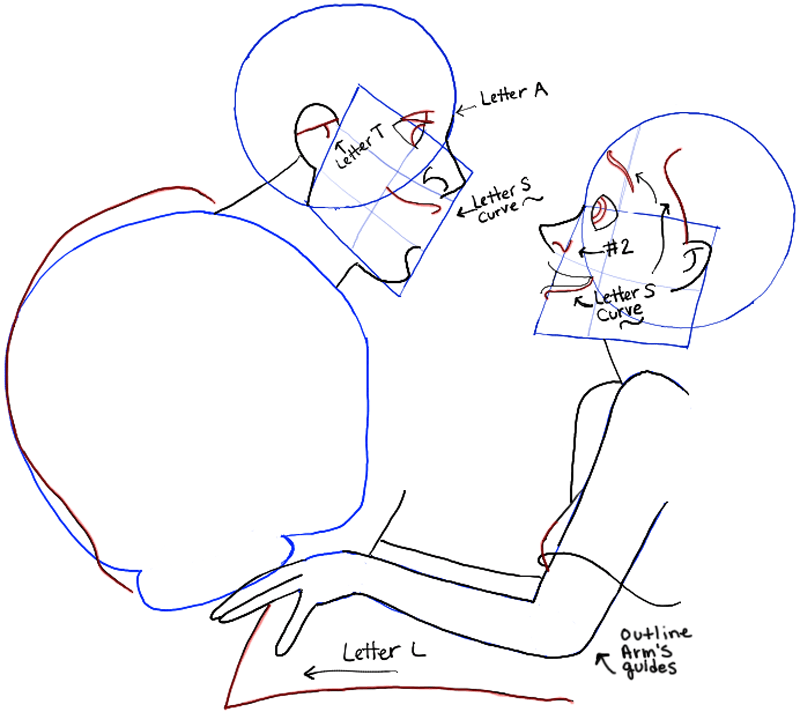 Giselle: Outline her arms and hand using the guides that you drew in previous steps. Draw parts of her face using letter ‘s’ shapes, a #2 shape, and curved lines. 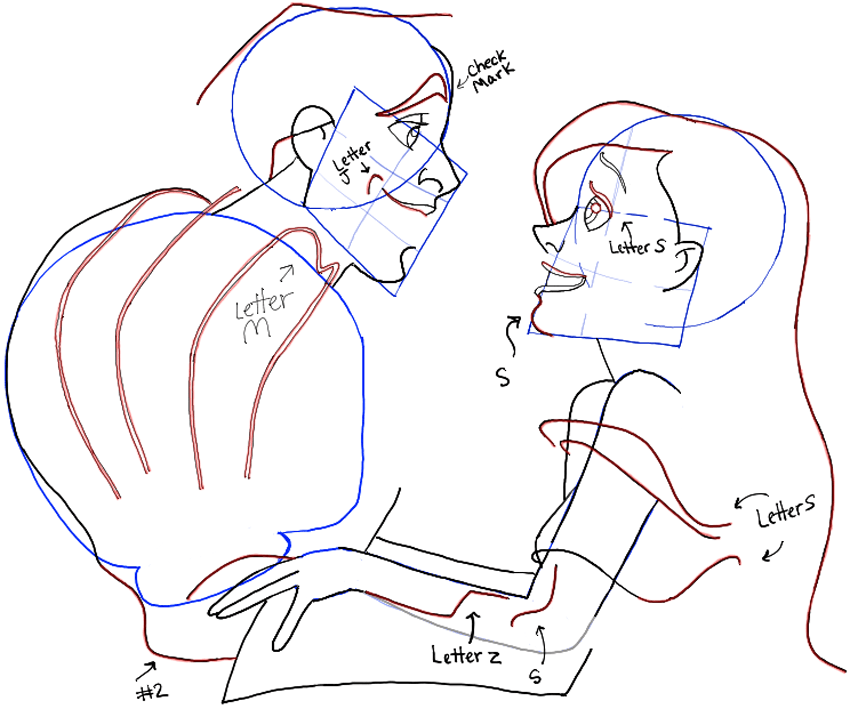 Prince Edward: Draw parts of his mouth. Draw a checkmark  eye brow. Draw the top of his hair. Draw a #2-like shape for his elbow. Draw stripes on his shirt. Draw a letter ‘z’ shape on his glove.

Giselle: Draw her chin, upper lip, and parts of her eye. Draw parts of her shirt and hair using several letter ‘s’ like curves. 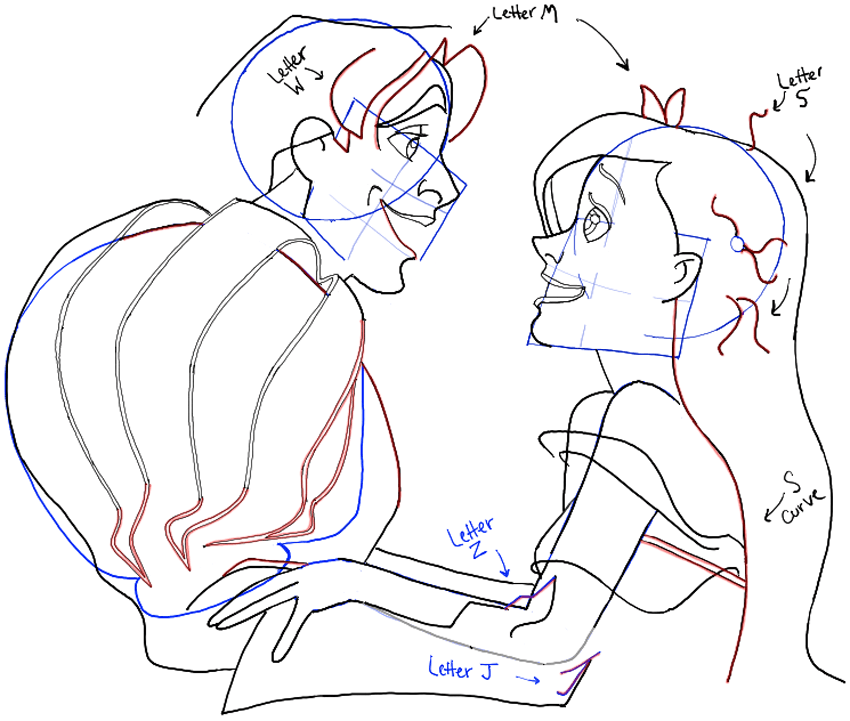 Giselle: Draw some letter ‘M’ and ‘S’ shapes for the flowers in her hair and her hair strands. 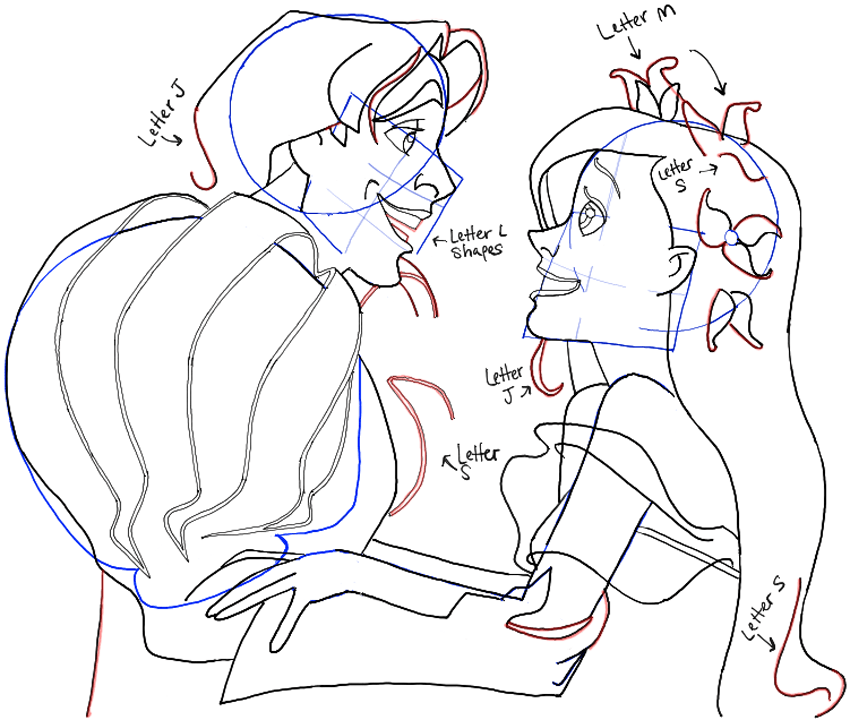 Giselle: Draw the rest of the petals in her hair. Draw a letter ‘s’ shaped curve in her hair as well as a letter ‘J’ shaped lock of hair. 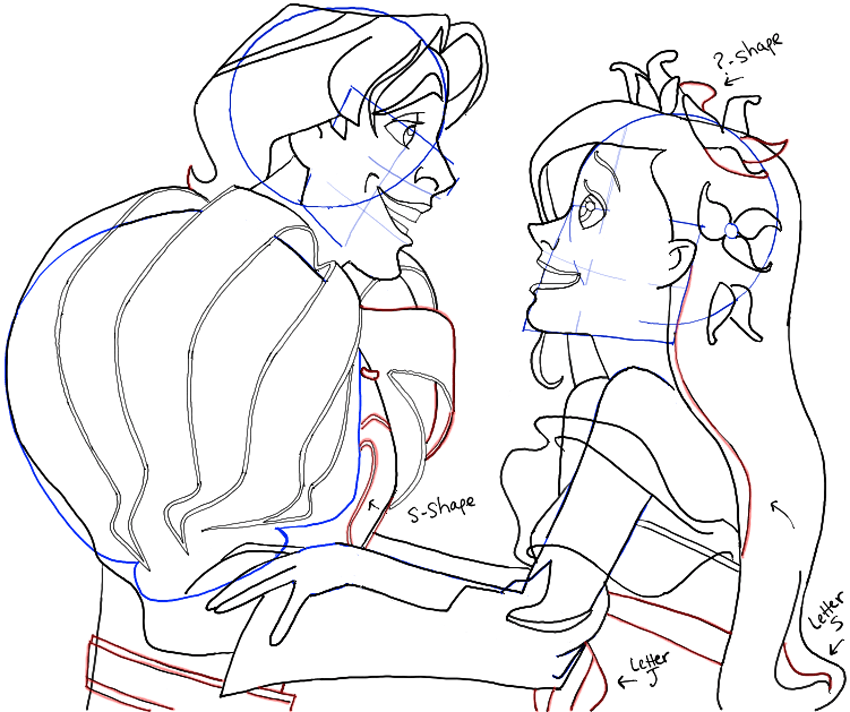 Prince Edward: Draw his belt. Finish his hair and shirt.

Giselle: Finish up her hair and dress.

Finished Drawing of the Animated Version of Giselle and Prince Edward 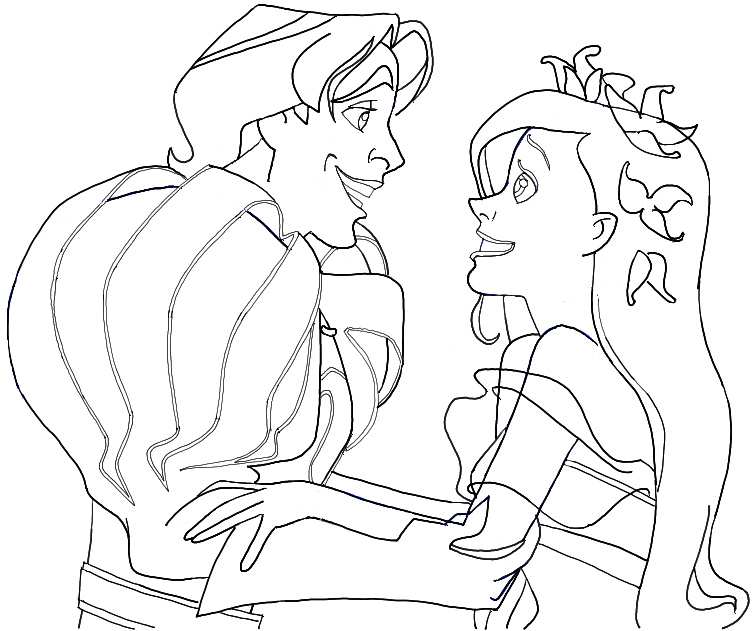 Now erase the guidelines and darken any remaining lines. Yo now have an animated picture of Giselle and Prince Edward. I hope that your picture turned out great and that you had fun drawing them. Come back for more drawing lessons soon!