This drawing lesson will guide you through the steps of shading a 3-dimensional pyramid. Learn how to make gradual graduation of tones to pyramids to create the illusion of depth on your 2-dimensional piece of paper. 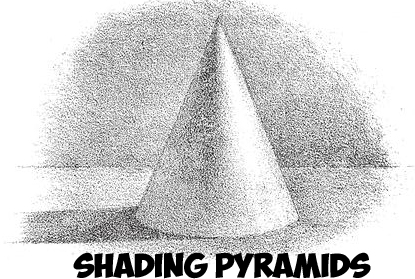 A cone may be considered a pyramid whose base is a polygon with an infinite number of sides.

If the image above represent such a pyramid, and the light fall from the right, as indicated in the diagram, clearly the sides 1, 2, 3, etc., should grow successively darker in tone. The darkest portion is not along the outer edge of the darkest side, because of reflection from the ground-plane…similarly the deepest shade on the cone will be removed from the edge. Again, the highlight on the pyramids runs along a line; and so it will be found on the cone. Moreover, the shade nearest the apex will be least affected by reflection. 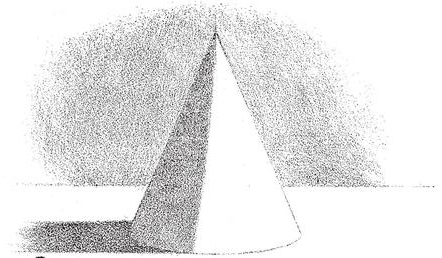 Shade the cast-shadow and the background. Draw lightly on the cone the edge of the shade, and lay on its tone of a depth equal to its lightest portion. The right edge should not be brought to a sharp outline, but allowed to be rather uneven, so that the gradation to the high light may be more truthfully rendered. 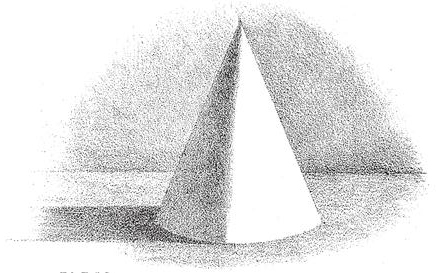 The darkest shade runs from the apex down the shade and near to its outer edge, whence it gradates to the left. The highlight may be taken to represent the light falling on one of the sides of our imaginary pyramid; in this case, the side 1.

Mark the high light with charcoal, so that it may afterwards be easily cleared.

The portion in half-tone gradates to the highlight. Be careful to keep the whole tone light—much brighter, in fact, than the reflected light. 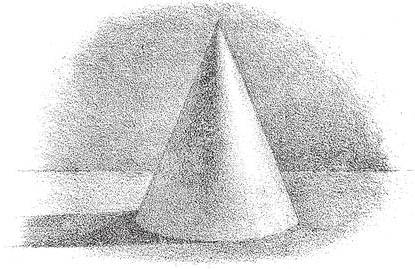 Darken the cast-shadow and the shade along its lowest edge. A light gradation on the background near the light edge will complete the drawing. The cone lying on its side can be easily represented by reference to the cylinder in a similar position, and to the cone with its axis perpendicular.