This is one of those things that they really didn’t teach me in art school…how to show age progression of a face. Here is some how-to tips for drawing old people’s faces and hands. I hope that it helps you. 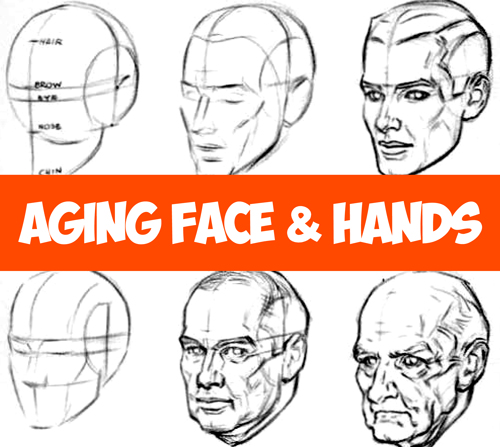 You can learn how to age your human model’s face by simply adding forms of the aging muscles and the folds and creases that will lay between them. The person’s cheekbones, the corners of the jaw, and the chin-bone will show their age. The nose’s cartilage, as well as the ear’s cartilage, appear to get larger as the person ages. The skin sags at the sides of the chin and along the jaw-line. 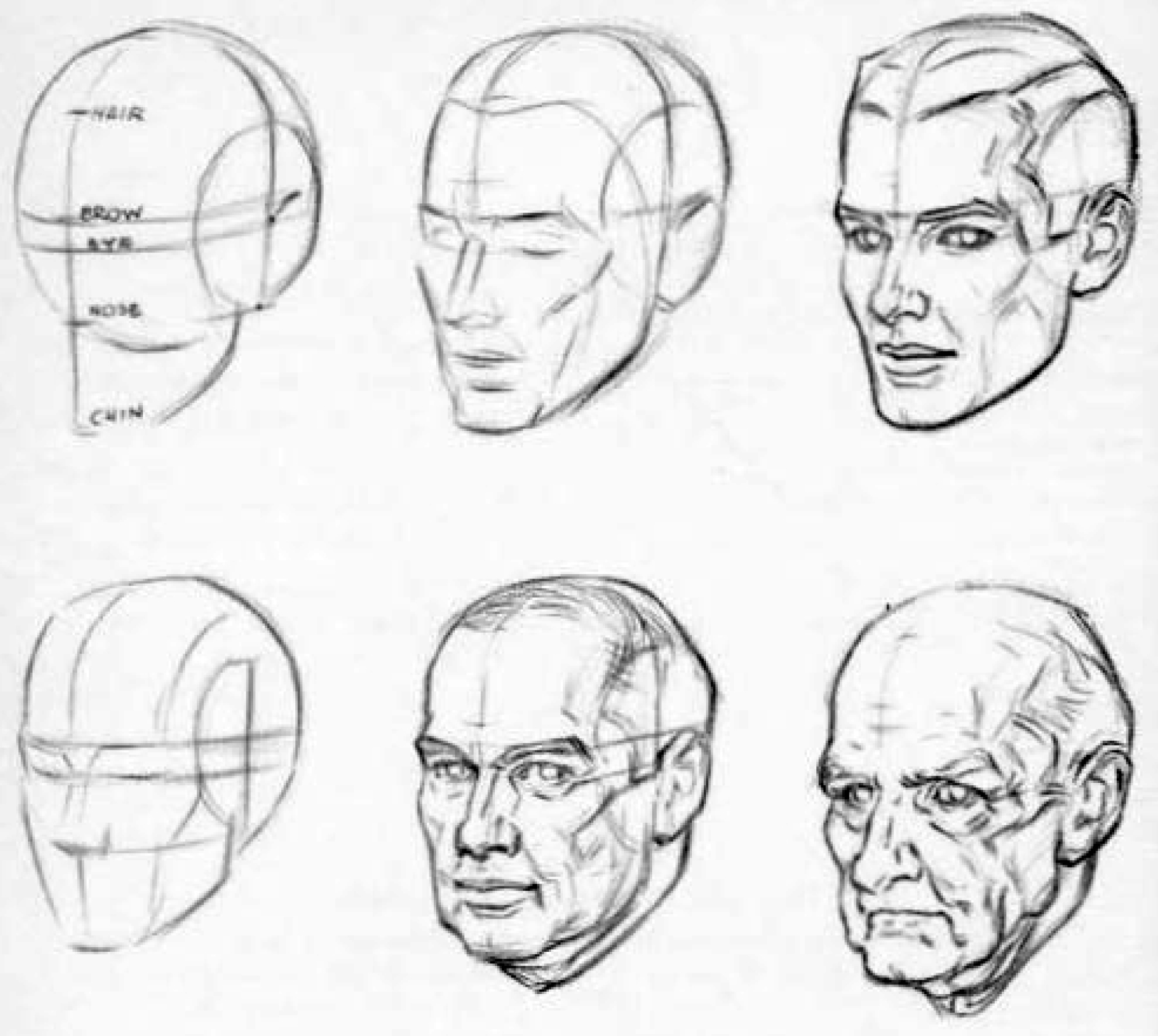 Skin sags beneath the eyes, so therefor pouches seem to form there….then there are deeper lines at the corners of the eyes, from all those years of smiling. The mouth and lips appear to get thinner and seem to move inwards…so therefor a straight line in the middle of the lips is created. The corners of the mouth gain lines and down around the sides of the chin. The skin above the eye lids also sag and the eye brows also seem to drop inwards towards the bridge of the nose…although you shouldn’t over-emphasize this. Of course, the hair thins…depending on the person. The overall drawing construction of the face and head is the same, it is just how the muscle and skin lie on the face that changes. Wrinkles, lines, and pouches of skin form on the face. 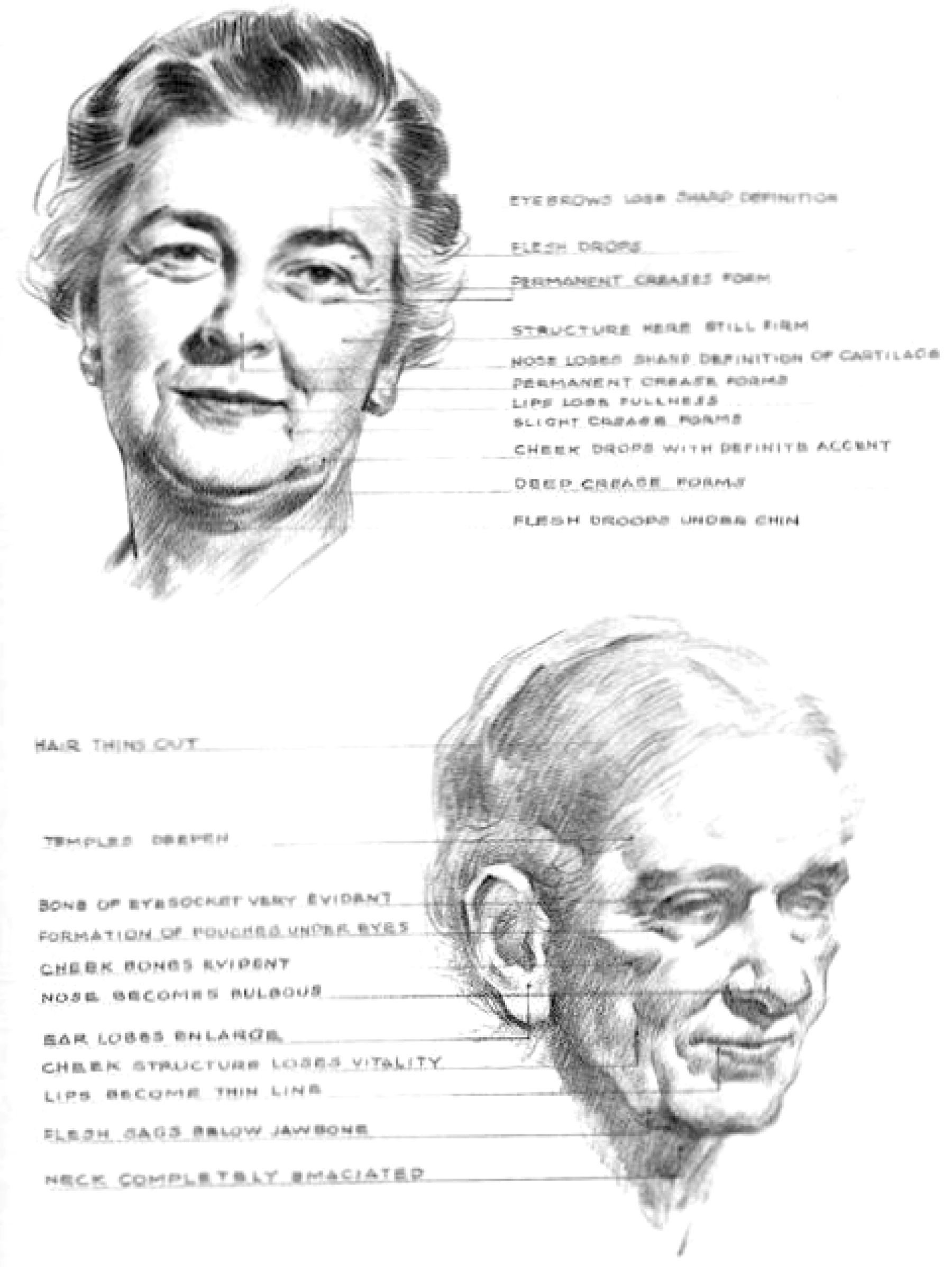 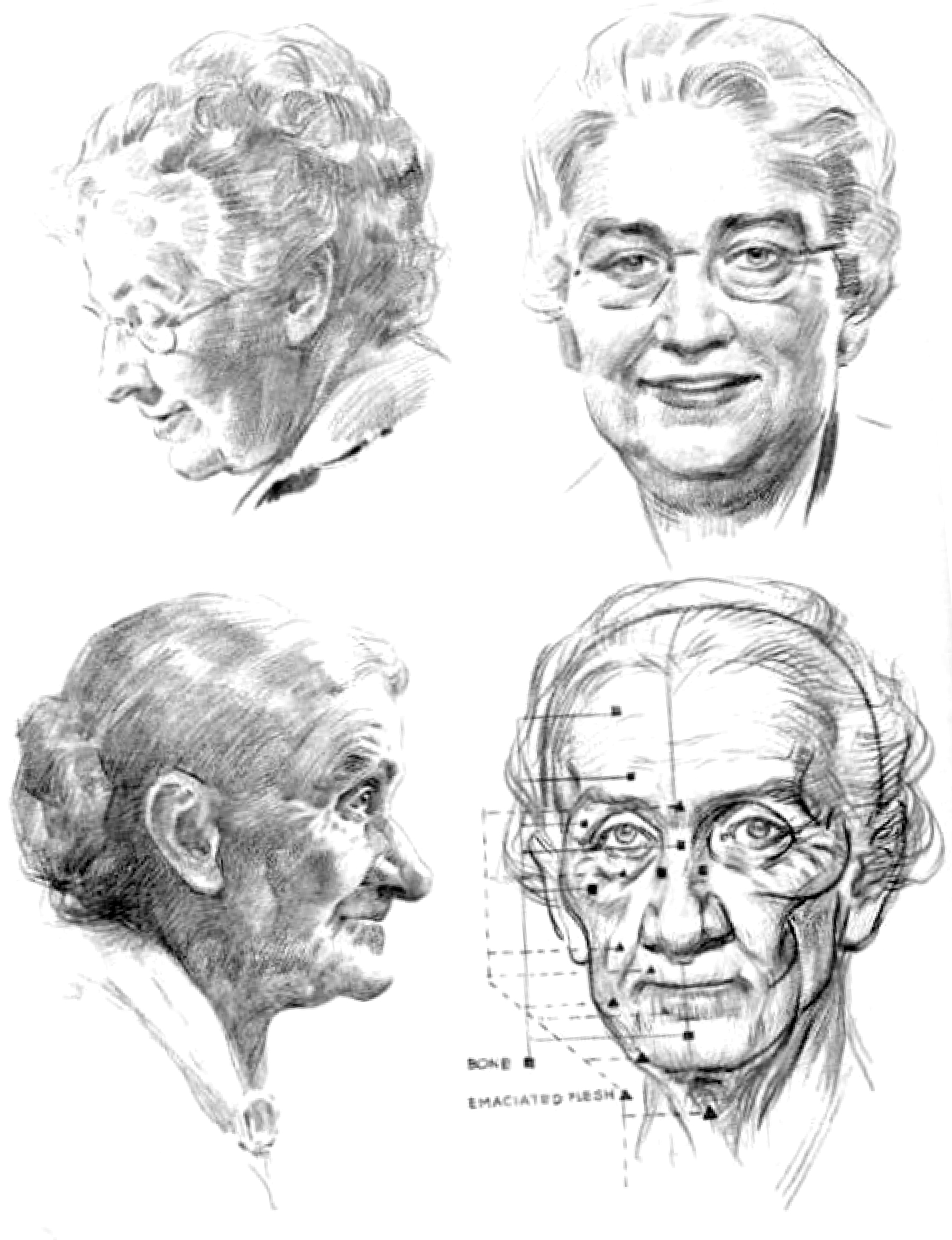 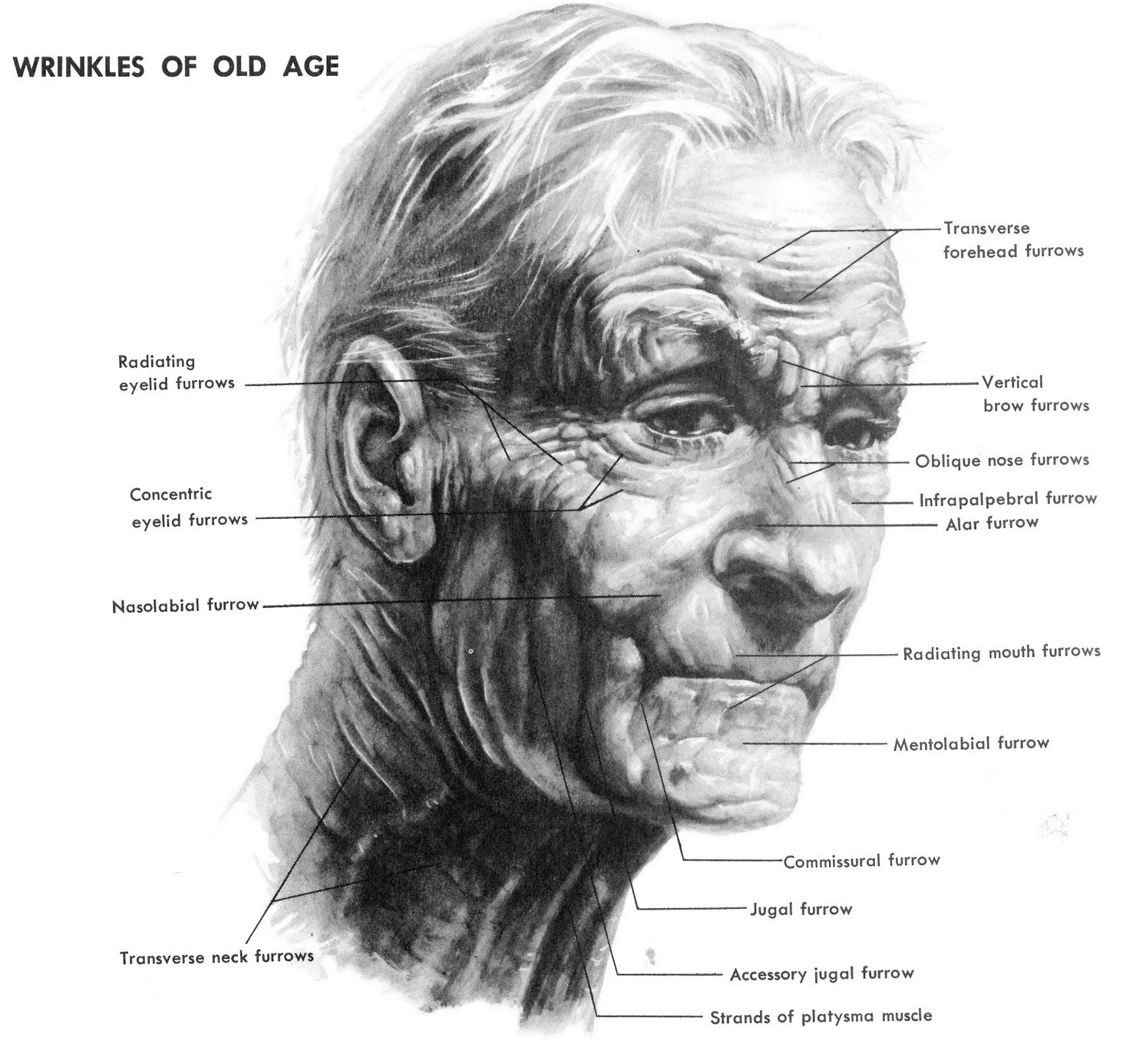 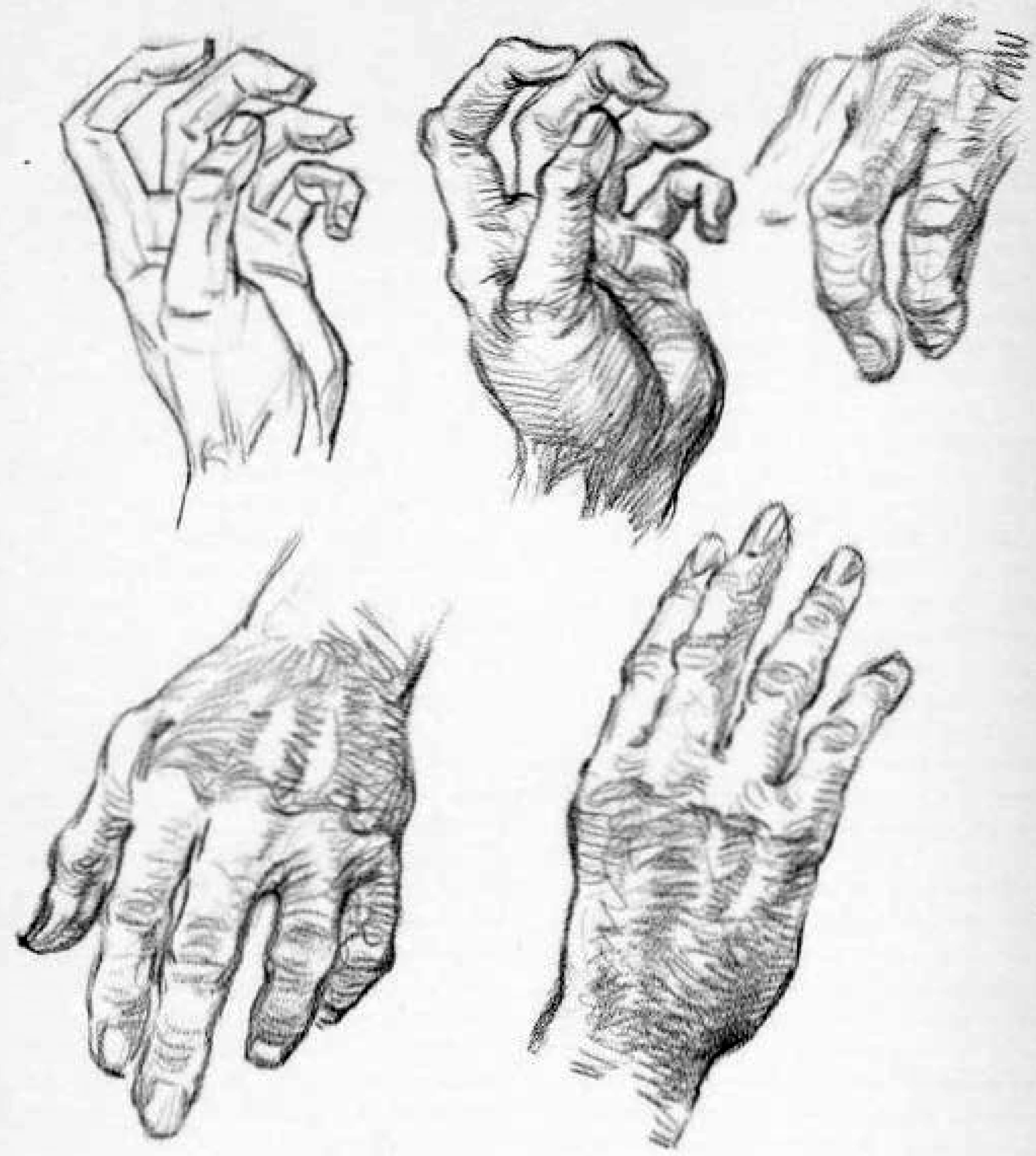 Once you have learned how to draw realistic human hands, elderly people’s hands are fun to draw. This is because they are much easier to draw than younger hands. This is because the anatomy is more obvious because it clearly shows on the surface of the hands. Although the basic construction of the hands is the same, the fingers get thicker, joints larger, and the knuckles stick out. The outer skin becomes wrinkled, but doesn’t need to be drawn in unless it is a very close-up view.

If you like this lesson, you might want to take a look at Andrew Loomis’ Drawing the Head and Hands on Amazon.