Today I will show you how to draw the baby with the pink hair and the stork, named “Junior” from the new Warner Bros. movie – Storks. It looks like an adorable movie so I thought some of you would want to learn these two cute characters. I have broken down the tutorial into about 30 steps to make it as easy as possible to follow along with. The simple steps can be found below. Enjoy and Happy Drawing!

Learn How to Draw The Baby with Pink Hair and the Stork Junior from Storks, the Movie – Simple Steps Drawing Lesson 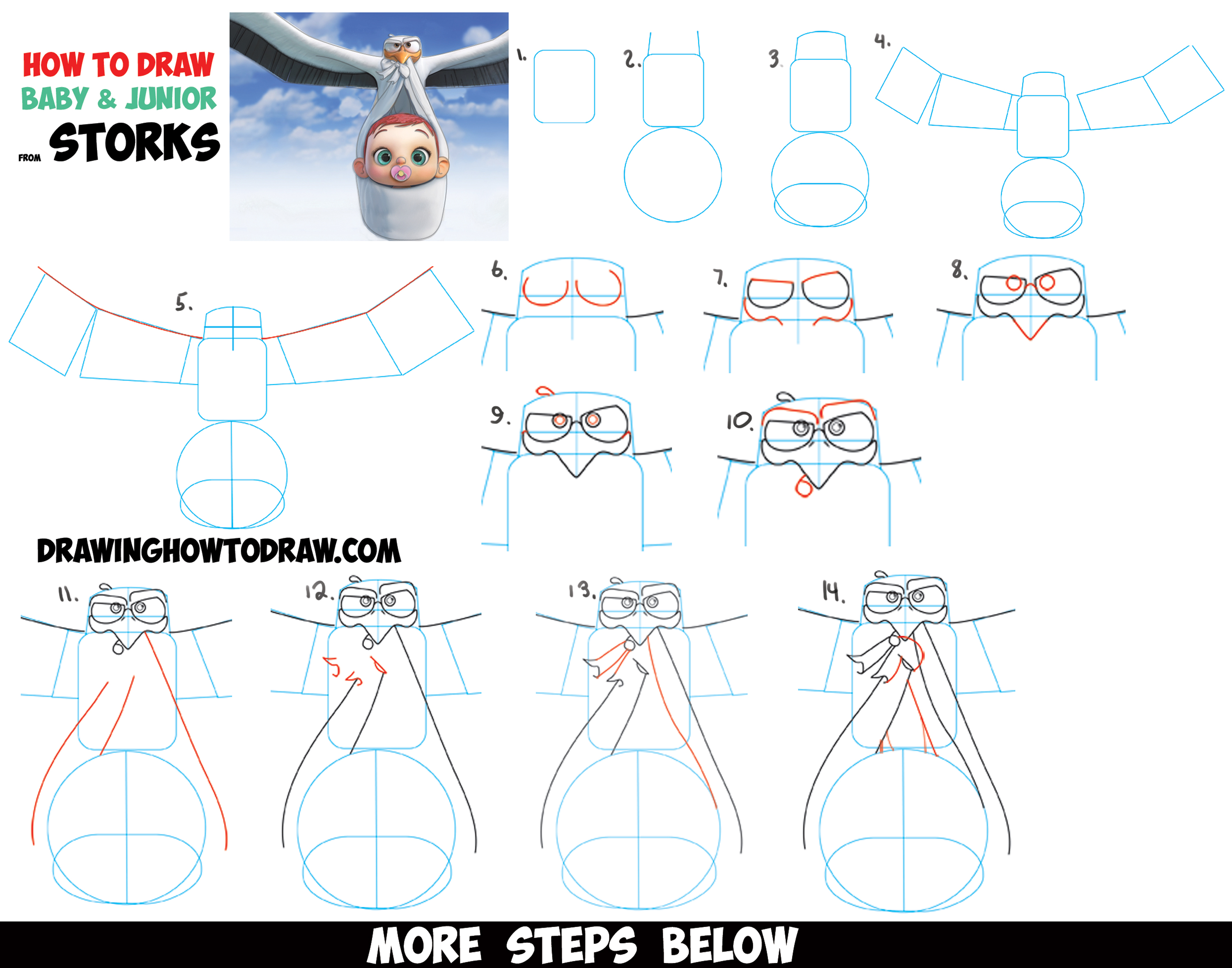 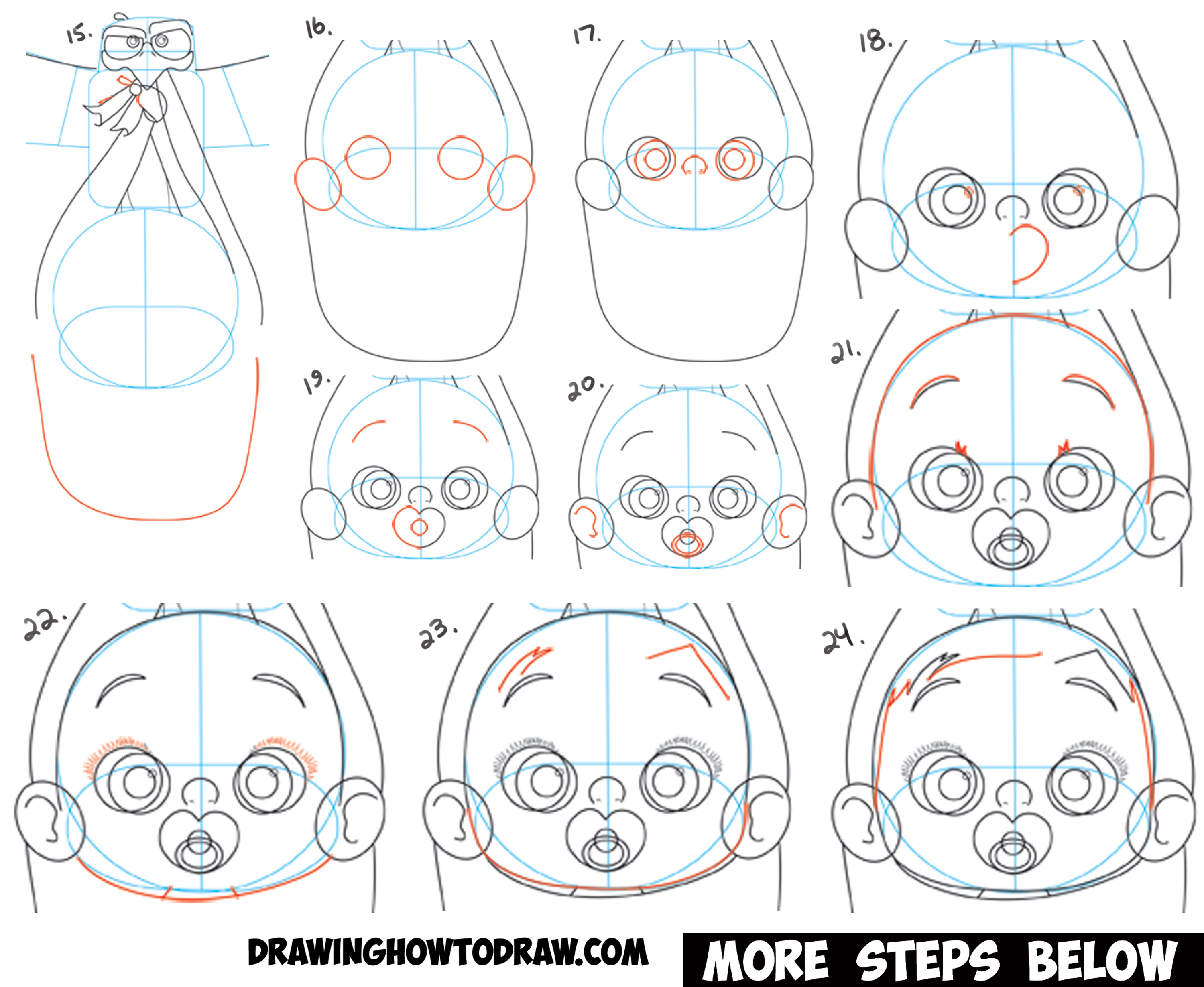 (Step 1 – 4) All blue lines in this tutorial are guide-lines. Guide lines are lines that you draw lightly just to guide you to draw the characters properly. All guide-lines will be erased at the end, so make sure to draw them very lightly. In step 1 – 4 lightly draw out the basic geometric shapes.

(Step 5) Lightly draw a letter ‘t’ cross hair guide-lines in the stork’s face (the very top part) and a line thru the baby’s face (the circle). Then draw a line for the top of the wings.

(Step 7) Then turn them into letter ‘D’ shapes with lines … Draw sideways ? shapes for the beak.

(Step 8) Draw circles for eyes, a curved line between the eyes and a letter ‘v’ beak.

(Step 9) Draw a sideways letter ‘U’ shape for the feather on top of the head. Draw a circle in each eye again. Draw a curved line on sides of beak.

(Step 10) Draw block-ish shapes on top of the eyes. Draw a lowercase letter ‘b’ shape below the beak.

(Step 11) Draw curved lines from the beak down around the baby’s head. This is the bag.

(Step 13) Draw some lines…we are still working on the bag.

(Step 14) Draw some lines and a letter ‘j’ shape for part of the ribbon.

(Step 17) Draw 2 circles in each eye. Draw a sideways letter ‘c’ shape for the nose. Draw curved lines for nostrils.

(Step 18) I made this picture a bit bigger to show you that I drew a circle highlight in each eye. Draw a backwards letter ‘C’ shape for part of the pacifier.

(Step 19) Draw a letter ‘C’ shape and a circle for the other part of the pacifier. Draw a curved line for each eye brow.

(Step 21) Darken the outline of the baby’s head, for hair. Draw a curved line on the top of each eye brown. Draw letter ‘M’ shape to start off eye lashes on each eye.

(Step 22) Continue drawing letter ‘M’-like shapes all along the top of the eye for the baby’s eye lashes. Draw a curved line below the baby’s head – this is the part of the bag below her face. Draw 2 outward lines for the baby’s neck.

(Step 23) Darken the guideline for the bottom of the baby’s face. Draw a letter ‘M’ and an upside down letter ‘V’ shape for the baby’s hair.

(Step 25) Use the wing guidelines to help you draw some lines on the bird. Finish up the hair.

(Step 26) Draw some more lines on the wing. Draw a sideways letter ‘c’ shape for the bottom of the stork’s beak.

(Step 27) Finish up the bag’s bow. Draw lines on the side of the stork’s abdomen.

(Step 28) Draw the top of the stork’s head. Draw lines on its wings.

(Step 30) If you have the time, you can color in the stork and the baby.