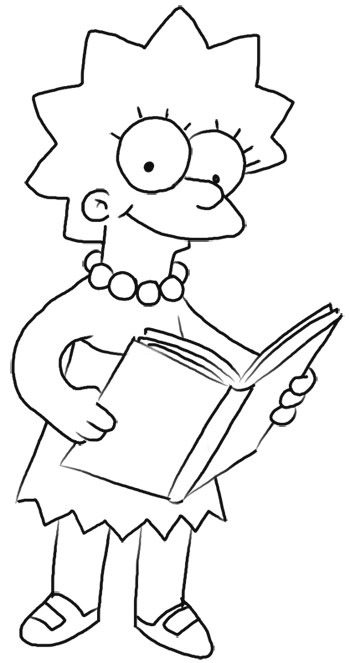 The above picture of a cartoon Lisa Simpson from The Simpsons is what we will be drawing step by step today. Find this drawing tutorial below. Get out a piece of paper, a pencil, and a black marker. Good luck. 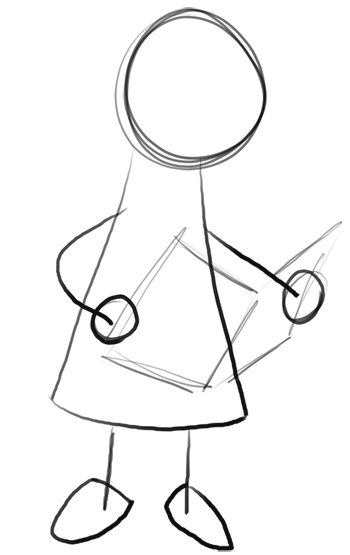 Take out your piece of paper and your pencil..we are about to sketch. Look at the picture above. I know that this doesn’t look anything like the finished Lisa Simpson picture  that we are attempting to draw…but I will explain why the picture above looks so strange.  Well, what I was trying to show you (in the picture above) was that Lisa is made up of a bunch of simple shapes.  Take a look at the image above and attempt to draw the simple-shaped Lisa Simpson.  Don’t worry about mistakes because you can erase these later. Later, you will be using a pen or marker to outline the ‘right’ lines. 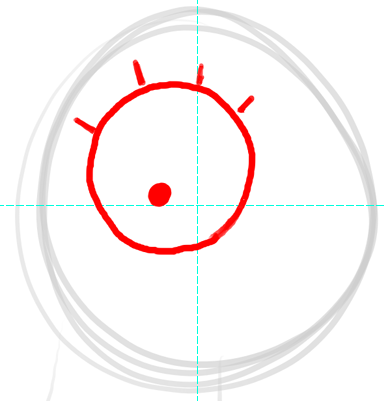 Now I zoomed in on Lisa’s face. The blue lines are to show you where to place the eye. I drew 2 blue lines to separate the circle in half vertically and horizontally. Draw a circle that is mostly in the upper left quadrant …. but that is big enough to be in all of the quadrants. Notice that the pupil sits on the horizontal blue line. 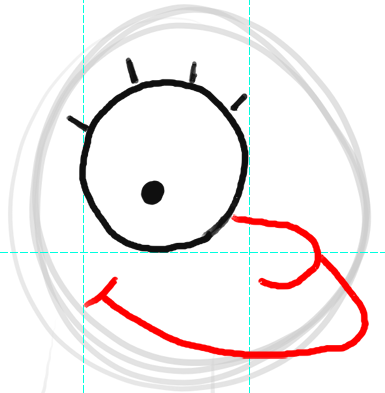 Now lets draw Lisa’s nose and mouth. Again, I drew blue lines to show you placement. I put a blue line to the right, to the left, and along the bottom of the eye to show you how the nose and mouth line up with the eye that you already drew. The nose looks like a backwards ‘C’ and as you can see where it starts and ends by looking at the blue reference line. The center of the nose is along the horizontal line that lines up with the bottom of the eye. Now draw a big backwards capital letter ‘J’ that starts at the center of the nose and goes all the way to the vertical line that lines up with the left side of Lisa’s eye. 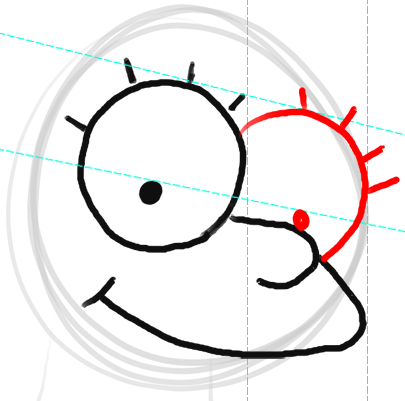 Now lets draw Lisa Simpson’s right eye. Again, I drew blue lines to show you placement. The right side of the eye lines up wtih the right side of Lisa’s mouth. I wanted to show you that the top of the right eye isn’t straight across from the top of the left eye…notice that it slants slightly downwards…the same is true about Lisa’s pupils. However, the bottom of the right eye is slightly lower than the point that the nose and lip meet. 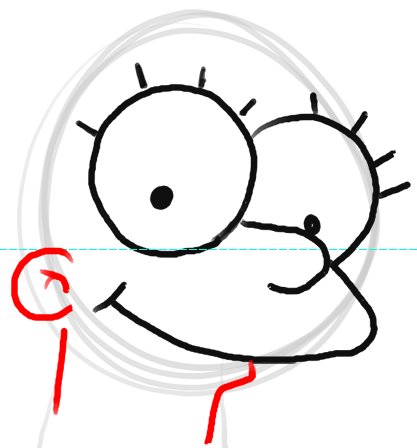 Now lets draw Lisa’s ear, which is the shape of a ‘C’. I drew the blue horizontal line to show you that the top of the ear is at about the same point of the bottom of Lisa’s left eye. Draw a capital letter ‘T’ in Lisa’s ear. Also draw a line coming down from the ear (but not quite touching) for Lisa’s neck. Also draw the bottom of Lisa’s mouth…this starts at about the same point of the right side of Lisa’s left eye. 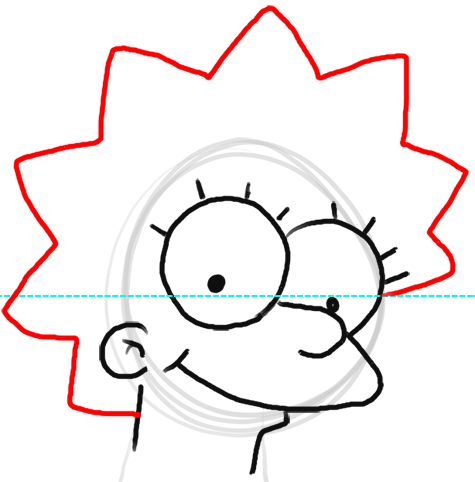