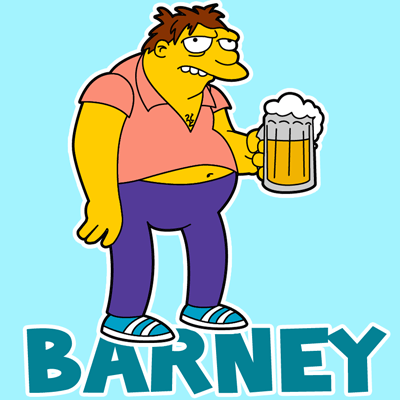 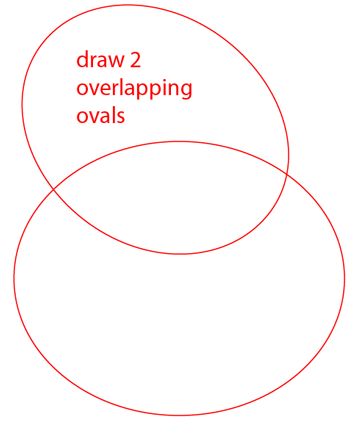 Draw two ovals overlapping each other. 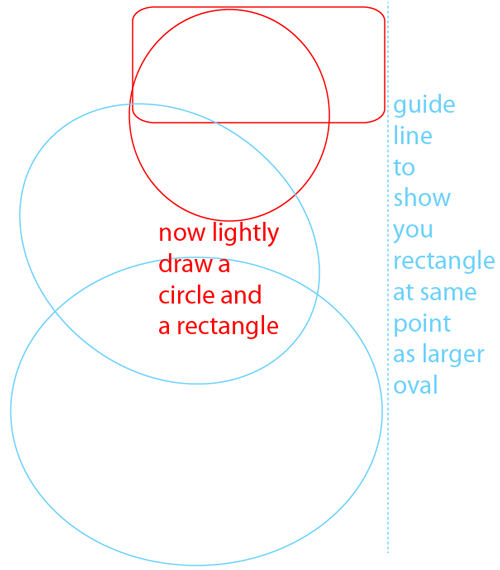 Now lightly draw a circle and a rectangle on top of the overlapping ovals. Draw a guideline to make sure the rectangle and the larger oval is at the same point. 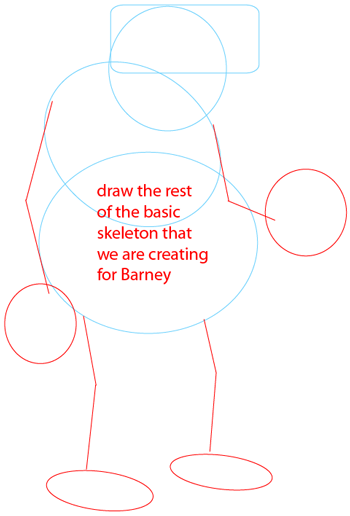 Draw the rest of the basic skeleton that we are creating for Barney. 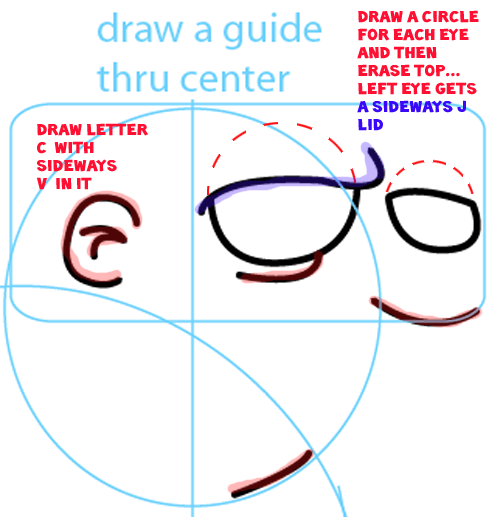 Draw a guide through the center. Draw a circle for each eye ( making the left larger than the right) and then erase the top of both . The left eye gets a sideways letter ‘J’ shape lid. For his ear, draw a letter ‘C’ shape with a sideways letter ‘V’ shape in it. Draw a curve under each eye and a slight curve at the bottom as show in the illustration above. 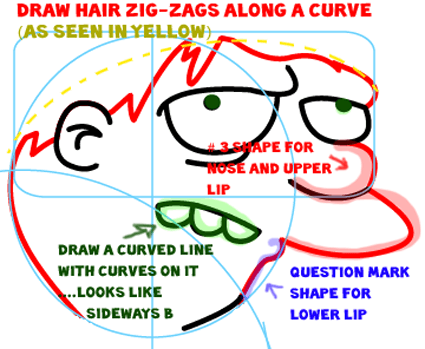 Draw the hair by drawing zig-zags along a curve (seen in yellow dashes). Draw a curved line with curves on it that looks like sideways letter ‘B’ for the mouth and teeth. Draw a number ‘3’ shape for the nose and upper lip and a question mark shape for the lower lip. 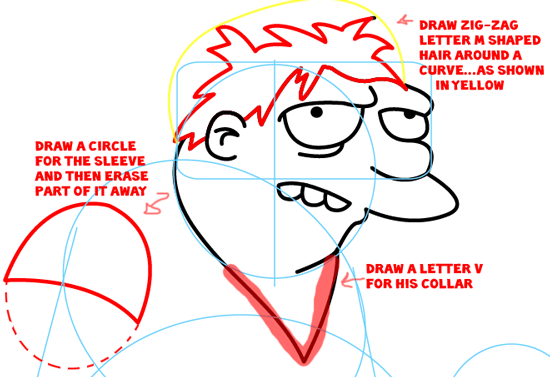 Draw a circle for the sleeve and then erase part of it away. Draw a letter ‘V’ shape for his collar and draw a zig-zag letter ‘M’ shape hair around a curve (shown in yellow). 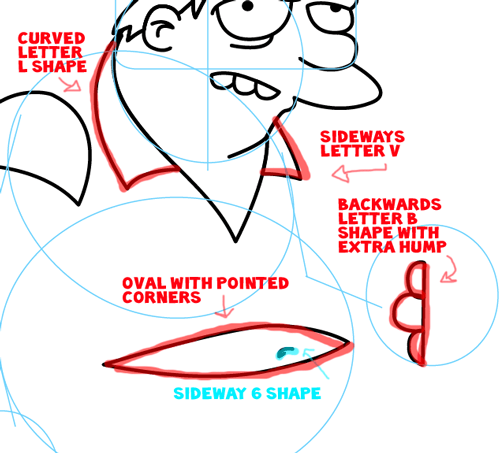 Draw a curved letter ‘L’ shape  and a sideways letter ‘V’ shape for the collar. Draw an oval with pointed corners and sideway number ‘6’ shape for his navel. Draw a backwards letter ‘B’ shape with extra humb for his fingers. 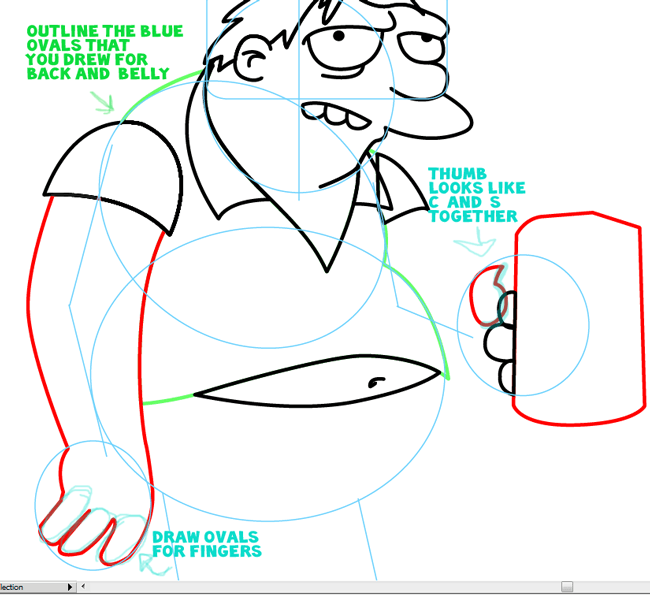 Outline the blue ovals that you drew for the back and belly. Draw the left arm and draw ovals for the fingers. Draw the right thumb that looks like a letter ‘C’ shape and a letter ‘S’ shape together. Draw the beer mug. 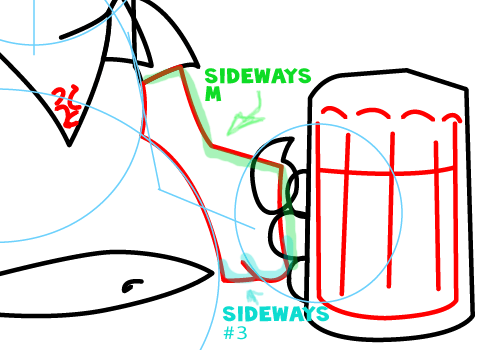 Add the detail lines to the beer mug.  Draw the hair on his chest. Draw a sideways ‘M’ shape and sideways number ‘3’ shape for the right arm. 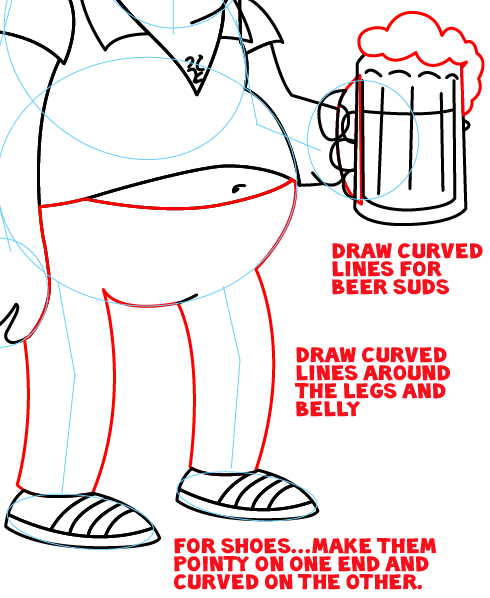 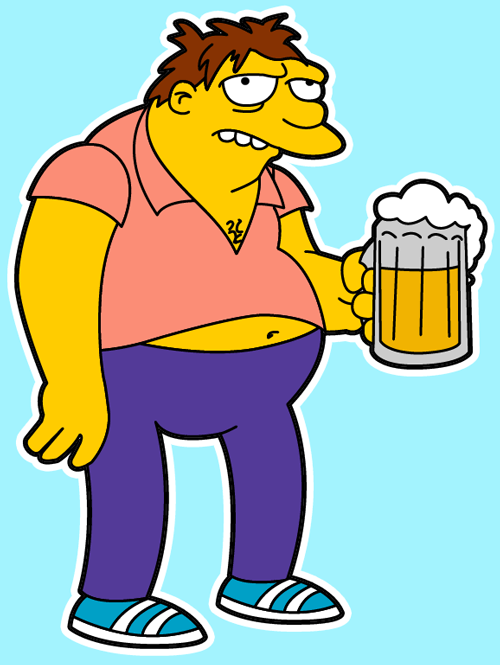