Drawing in Pen and Ink : Techniques for Pen Drawing 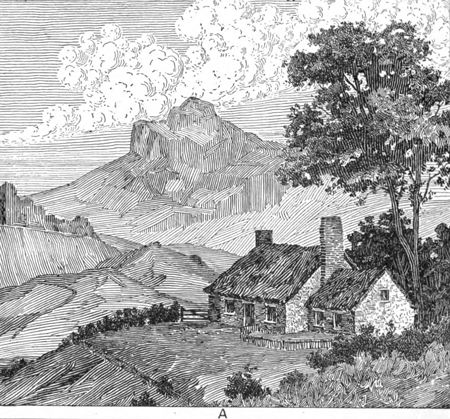 How to vary tone in ink drawings

The technique of the pen is vastly different from that of any other tool the artists use, and the work done with a pen is consequently very unique. By nature it is a much harsher and a less flexible instrument than either the pencil or the brush, even though pens have come a long way. A pen drawing has a distinct individuality, no matter what kind of a technique is used, fundamentally because of the manner of getting the various tones and shadows, which is different from that in the other mediums generally used.

In pen drawings, the ink goes on to the paper in its full strength, unlike with other mediums. In other mediums, you either add water or white to get lighter tones, however with pen and ink, you use the white of the paper to get lighter tones. To get a half tone, or quarter tone, or whatever tone is desired, the intensity of the color must, of course, be reduced, but this reduction of tone is produced by using the white paper as the reducing medium. Instead of water or white being mixed with black and then applied to the paper, the solid black is put upon the paper, which itself is used for the white and mixed with the black as the latter is placed upon it. This is done by means of lines, stipples, etc. (which will be described later), all of which, in some form or other, allow the white paper to show through and, by mixing with the ink, produce a reduced tone of black. For a dark or heavier tone, more ink lines are used, for a light tone more paper shows through, the ink lines being thinner or farther apart. If we take a space say one inch square and color it solid black, there is a black spot one inch each way; if we leave it untouched, then there is a white one; if we cover it with black lines that are the same thickness as the white ones in between, then we get a half tone; if with lines that are three times as wide as the white, it is a three-quarter tone; if the white spaces are three times the width of the ink lines, then it will be a quarter tone. The ratio of the black lines to the white spaces of paper that shows through between is the factor that governs the tone, and, as the tones of a drawing vary greatly, the heaviness of the lines and the proportion of the white paper must, of necessity, vary also. 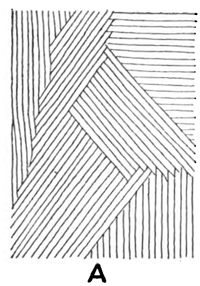 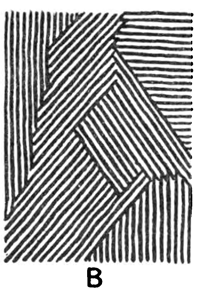 A, for example, shows a light tone, while in B a dark one is seen. They are both tints made by lines running in the same direction, and of the same character. The difference in tone is obtained by the difference in the thickness of the lines used, and in the size of the white spaces showing between. In A, the black lines are thin and the white lines between thick; while in B, the black lines are much thicker and the white ones thin. In other words, if the amount of black on a square of the same size of white paper is more in B than it is in A, B is necessarily the darker tone. More ink, a darker tone; less ink, a lighter one.

As the most popular and as the style in general use, lines should be considered first. They fall naturally into two kinds—loose lining and regular lining. 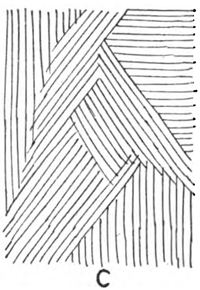 Loose lining is a style wherein the movement of the hand and fingers is largely automatic; it is drawn quickly, and with no great effort made to keep the lines equidistant, though a practiced artist will instinctively draw them fairly even. Loose lining can be created simply by moving the fingers and hand back and forth over the paper. More pressure on the pen will, of course, make a heavier line; less pressure, a lighter one. This is the same method as in writing, a heavy pressure spreads the point of the pen and makes a darker line. 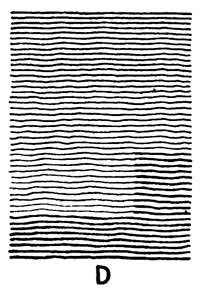 D shows a square of regular lines, which is drawn in a very different manner from C. The direction of every line is carefully watched, and the lines are “drawn”; that is, they are directed with precision to keep them the same distance apart and the same depth of color. The lines should be mechanically perfect in direction, thickness, and separation. When a darker tone is required, as at the bottom, make the lines thicker; for a slightly lighter, make them thinner or farther apart. It will be noticed that there is a slight gradation of tone in the square. 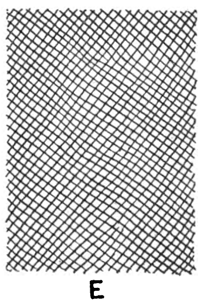 E shows a square of lines crossed by other lines. This is known as crosshatching, and is sometimes used for the purpose of darkening a tone already laid down. Crosshatching is seldom seen any more, except for certain special uses or to add a little variety of technique to a drawing. For an ordinary tint, it is hardly ever used, modern practice demanding that the tint shall be made by placing the lines closer together, or by making them heavier. Sometimes, in the darker parts of a drawing, where the tone needs to be very heavy, yet not black, and the black lines have been made as wide as is convenient or as will look well, crosshatching may be practiced. In this case, it turns the thin, white lines into small, white dots, and makes the tone darker.