HOW YOU MOVE THE FIGURE 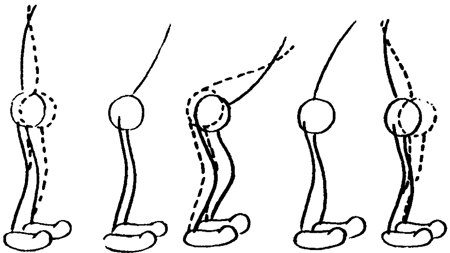 This exercise demonstrates the way the action line reverses itself in action. Note how the hip mass leads first.  Also note how the top of the action lines lags behind, and then continues forward even after the hip mass has changed direction. A moving figure or any moving part of the figure obeys the law of movement illustrated here. Both full figure and appendage such as an arm “wave” when they move, like a blade of grass in the wind. This is because all portions of the body are hinged, some such the head and hands on multiple hinges permitting great flexibility. The figure and its parts therefore “flap” according to the hinges and recover.

We stress that the reader absorb this principle of movement and conceive all figures accordingly. Once you master the “waving blade of grass” idea your figures will be dynamic and moving no matter how simply drawn.

To Every Movement, There are Three Parts

In strip cartooning these may easily be carried from box to box. In spot cartooning one only may be used. In animated cartoons the continuous action is easily portrayed.

ACTION AND BALANCE IN ANIMATION

This represents a basic pattern for action. It is an animated cartoon formula which will enable you to break the most complicated actions down to the simplest possible set of laws governing them. Line number (1) is your starting action line. You start bending it in the direction of the arrow toward position number (6). After you get to position (6), the line starts back. (In the second group,  the dotted line represents position (6) of the first group.)   Notice that the line starts back at the base, while the upper part is still going forward. After the line passes position (6) on the way back, the upper part of the line snaps into a simple curve as in position (9), and continues that way until position (12). The same treatment is used to start it going back in the original direction—The dotted line in group (3) representing position (12) of group (2).  This action line could represent the body bending forward, then straightening up, and then bending again.  Actually it is the basic rhythmic pattern that the body goes through in practically all action. Had we stopped the action line at position (2) instead of (6) and then reversed it, we should have had just a slight swaying motion. Actually we could have continued the action flow beyond positions (6), (12), and (18) before reversing, but the same principles would hold true. We will demonstrate how this principle works in the section on action analysis.

A standing figure is off balance when the hip, shoulder, and head masses are so distributed that the figure has to swing into action to counter-balance. In other words, the feet are no longer in position to support the weight placed upon them. Practice shifting your weight from side to side. See how far you can do so without moving your feet. Notice the point at which you must shift your feet or fall. 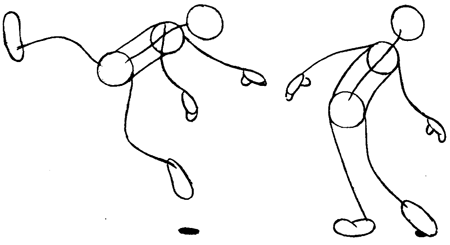 Here is a figure taking off for a high jump. Considered as a still position it is off balance, but the forward motion (speed) acts as a compensating force and will enable the figure to recover balance by the termination of the action.

Action usually starts when a figure is thrown slightly off balance.

1. Weight centered over both feet.

4. Note how every par+ of body reacts to keep figure in balance.