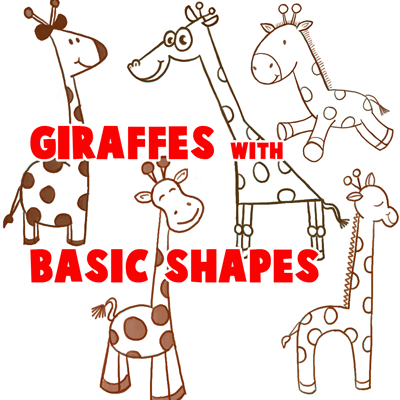 This guide will show you how to draw many different giraffes …all with simple geometrical shapes, letters, and numbers. If you can draw numbers and letters than you can also draw these cartoon-styled giraffes. There are five giraffe drawing tutorials below and you can take bits and pieces from each of these tutorials to creatively design your own giraffe cartoon characters.

First –  Lets Think About What Characteristics Real Giraffes All Have 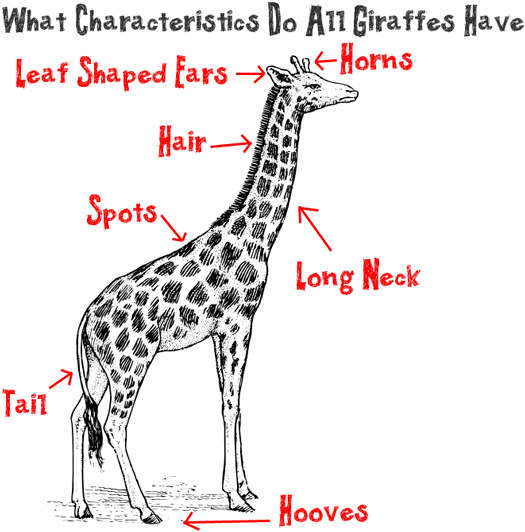 When drawing a cartoon characterization of an animal, you first have to think about what sort of ‘features’ or ‘characteristics’ that type of animal has. So lets first look at a giraffe… most giraffes will have the following features:

(1) Long Neck (this is the most important feature of a giraffe, no other animal has such a long neck)

As we draw our giraffe characters, we can play with some of these characteristics to make silly looking cartoon creatures. But, as we do this, we have to make sure that the drawing always looks like a giraffe. Think of cartoons as caricatures of people and animals. Get as silly and playful as you want to. As long as you make sure to add some of the important features of a giraffe (that we listed above), people will be able to identify your cartoon character as a giraffe. If they can’t tell, that means that you didn’t exaggerate this feature enough.  The Most Important thing to remember is : DRAWING SHOULD ALWAYS BE FUN!!!

This is one of our large guides, so within this lesson you will find five different cartoon giraffe drawing tutorials. All of these tutorials are simple enough to draw these giraffes in under 10 steps. Find these step by step drawing tutorials below:

GIRAFFE #1: DRAW A GIRAFFE WITH A LOWERCASE LETTER b SHAPE 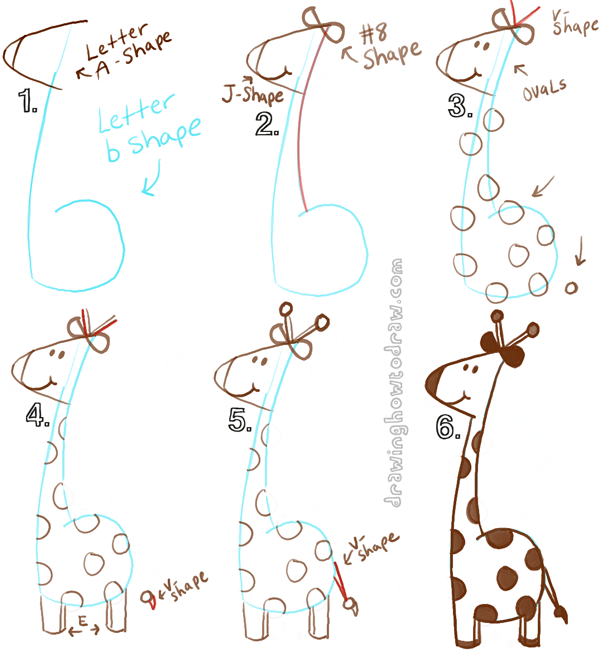 Here is a simple giraffe tutorial to start with…this cartoon giraffe is based on a lowercase letter ‘b’. Find out how to draw him with the picture above and the following written directions:

(1) Draw a lowercase letter ‘b’ shape. Then draw a sideways capital letter ‘A’ shape on the top of the ‘b’ shape.

(3) Draw ovals for his spots…as well as a smaller oval to the right of the body. Draw a letter ‘V’ shape above his ears.

(5) Draw a letter ‘V’ shape connecting the oval to the body. Draw circles on top of the ‘V’ lines for the last detail of the horns.

(6) Finish off the shape of the giraffe…erase any guidelines that you don’t need any more.

GIRAFFE #2: DRAW A GIRAFFE WITH A LOWERCASE LETTER h SHAPE 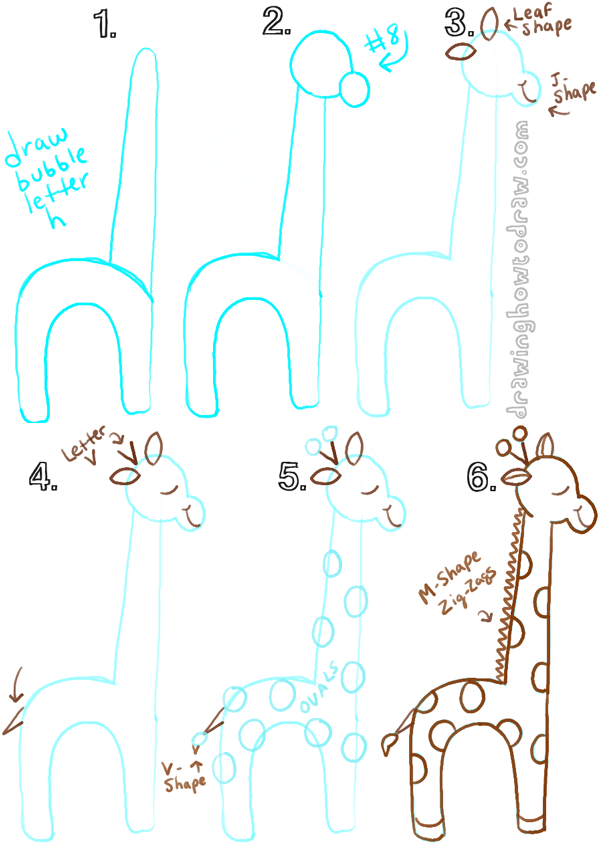 This giraffe is based on the lowercase letter ‘h’ and isn’t very difficult to draw. As long as you can draw a letter ‘h’, you should be able to draw this little guy.

(4) Draw a letter ‘v’ shaped tail and horns.  Draw a curved line for the eye.

(5) Draw an oval and a letter ‘v’ shape at the end of the tail. Also draw ovals for the spots…and for the top of the horns.

(6) Add M-shaped zig-zags for the hair on the giraffe’s neck. Draw a curved line in the center of each of the ears and at the bottom of the legs. 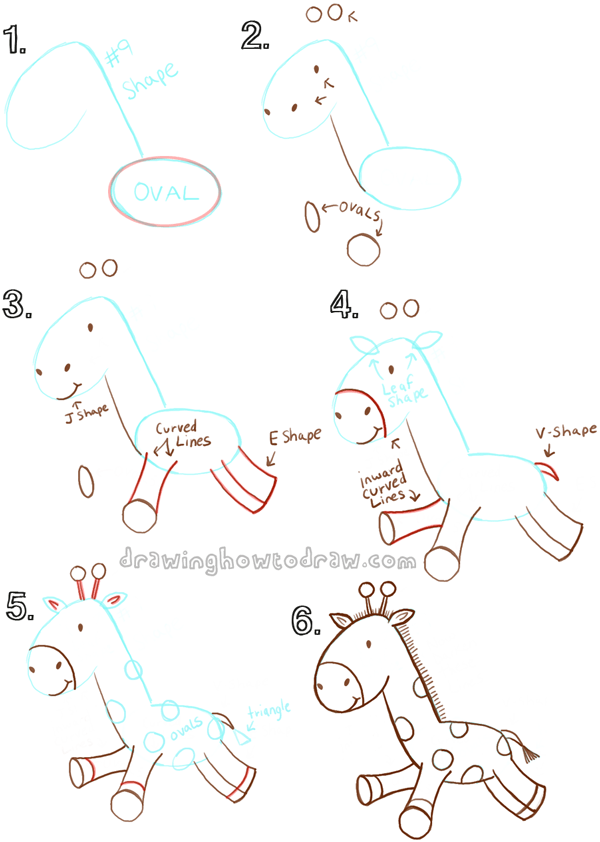 Here is an adorable cartoon giraffe that looks a bit like a stuffed animal that you can cuddle with. If you want to learn how to draw this cutie pie, find out with the pictures above and the instructions below.

(3) Draw a letter ‘J’ shaped mouth and a capital letter ‘E’ shaped back legs. Draw 2 inward curved lines for the oval on the right-front-side.

(4) Draw 2 more inward curved lines connecting the oval on the left-front side to the giraffe’s body. Draw a letter ‘v’ shaped tail and leaf-shaped ears. Draw a curved line in the giraffe’s snout area.

(5) Draw letter ‘v’ shapes in each ear. Draw ovals in the giraffe’s body for spots. Draw curved lines on the legs. Lightly draw a triangle shape at the end of the tail. Draw 4 lines, connecting the ovals to the head (for horns).

(6) Draw hairs going down the giraffe’s neck and hairs at the end of the tail (using the triangle as a guide). Erase any guidelines that aren’t needed any more.

GIRAFFE #4: DRAW A GIRAFFE WITH A CAPITAL LETTER B SHAPE 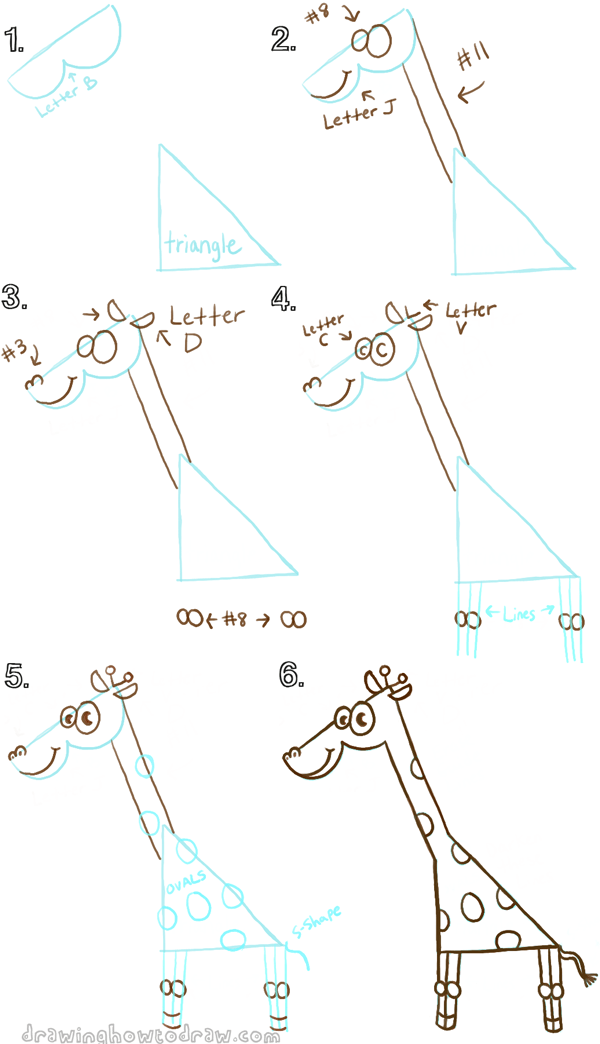 I love this giraffe…its face is made with a capital letter B and ts body with a triangle shape. It isn’t hard to draw and you can definitely show off your drawing skills with this one.

(1) Draw a sideways capital letter ‘B’ shape and a triangle below and to the right of it…making sure to leave enough room for a very long neck.

(3) Draw a sideways #3 for its nose…capital letter ‘D’ shaped ears…and 2 sideways #8 shapes below the body.

(5) Thicken the ‘C’ shapes in the eyes to look like the ones above. Draw 2 circles on top of the ‘V’ shaped horns. Draw ovals for spots. Draw a letter ‘S’ like shape for the tail. Also draw curved lines at the bottom of the legs.

(6) Draw a second letter ‘S’ shape for the tail…draw a few lines at the end of the tail for hairs. Finish up the giraffe by erasing any guidelines that you don’t need any more.

GIRAFFE #5: DRAW A GIRAFFE WITH A LOWERCASE LETTER d SHAPE 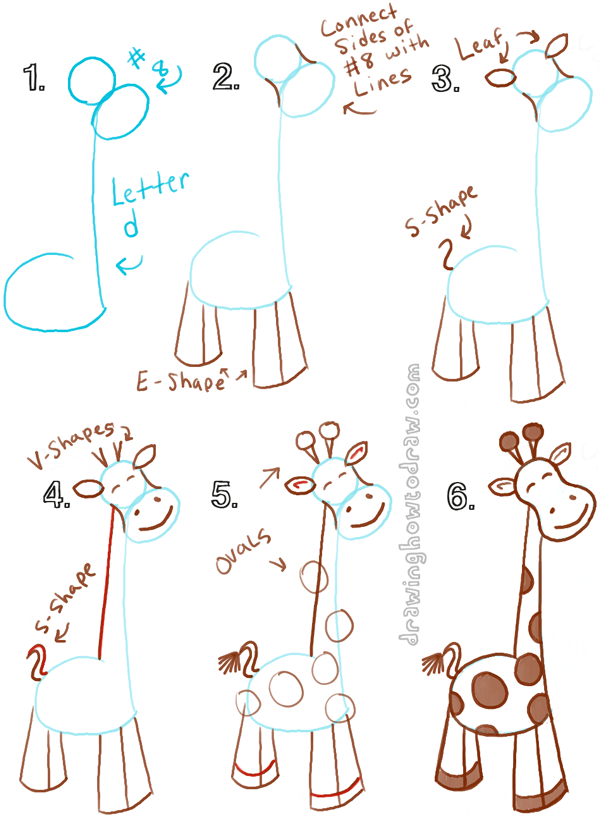 For our last cartoon giraffe, we are showing you a stylized cartoon giraffe made from a lowercase letter ‘d’ shape. The face is made up from a number ‘8’ shape…all shapes that I know you can draw…find out how to draw it now.

(6) Finish the giraffe off by erasing the guidelines.

Now it is time to mix and match what you have learned and make up your own cartoon giraffe character creations. Post your giraffe drawings – we would love to see them. Make them funny by adding funny captions. Have fun!!!